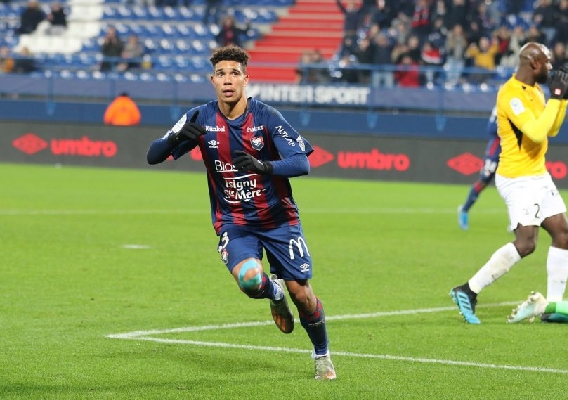 American forward Nicholas Gioacchini played a big role this past season in ensuring SM Caen wasn't part of a relegation battle in Ligue 2. Looking forward, the young Kansas City native hopes to have his club in promotion while also taking his first steps in the international game with the United States.
BY Brian Sciaretta Posted
April 24, 2020
1:00 PM

LIKE IT IS in most of Europe, the leagues in France are currently in a shutdown due to the COVID-19 pandemic. For Nicholas Gioacchini, the timing was particularly harsh given that the young American attacker was beginning to breakout at Ligue 2’s SM Caen where his performances helped the club move away from the relegation zone while also catching the eye of U.S. national team manager Gregg Berhalter.

Gioacchini, 19, is not a name known to many American fans. For one, he has never featured for the United States at the youth national team level and never played much in the United States. But his performances with SM Caen in the months before the shutdown were particularly impressive given the importance to the club of avoiding a relegation fight.

Playing in a variety of positions ranging from the wings, attacking midfield, to center forward, Gioacchini showed promise in his first season at the professional level. Over 16 performances in Ligue 2, Gioacchini scored twice and drew two penalties. He also scored two goals in two Coupe de France games for a total of four goals across all competitions this season.

But his overall value was reflected in the SM Caen’s performances with Gioacchini on the field. He started half or 14 of the team’s 28 games. In the 14 games Gioacchini started for Caen, the team posted a record of six wins, four draws, and four losses for a total of 22 points. In the 14 games Gioacchini either didn’t start or didn’t play, Caen posted two wins, six draws, and six losses for a total of 12 points. Not surprisingly, this season the club awarded Gioacchini with a new contract that will run through 2023.

Regardless of whenever the club plays again, Gioacchini is confident of his ability to contribute.

“That was the hardest part - to mentally bring ourselves out and bring the confidence back, win some games to bring us out of the relegation spots. It was great, but it was still a large challenge - especially in the second division. It's never easy…At first, I was quite shy. But at the end of the day, you still have to break out and show your confidence and show what you can do. Whether you're from the country or not, sometimes that puts a challenge in front of you, but otherwise, that's what I love to do.”

“I see myself best in the middle - as a striker, a No. 9,” he added on his position. “But whenever they put me on the wings, I still know how to adapt and play that position.”

Like all other players, Gioacchini is now reduced to working out at home by himself. The only times he is currently working with the ball is when he goes to a nearby park by himself. Whether or not the season resumes, Caen’s status in Ligue 2 is likely assured for 2020/21 as it sits midtable in 13th place and is no longer in danger of relegation while also having no prospects for promotion.

But next year Gioacchini believes that SM Caen has a chance to push for promotion to Ligue 1 in large part due to the performances in the second half of the season and the response the team showed after October’s coaching change which saw Pascal Dupraz take the job.

“I know we can,” Gioacchini said. “I think it's just a matter of time. This year we changed coaches. The team has really evolved and changed a lot. That made it a little more difficult. But in the following year, there is no reason why we shouldn't be able to move up.”

While there have been a growing number of young American players in Europe in recent years, many of these players made the move after having been scouted in the United States. For Gioacchini, he moved to Europe for non-soccer reasons.

Born in Kansas City, Gioacchini moved to his father’s native Italy when he was eight years old. He returned stateside when he was 12 to live in the Bethesda, Maryland area where he played for the ESSA Soccer Academy. But in 2015, he moved with his family to France.

The nature of his transient childhood was due to his father’s line of work selling pasta machinery. The fact that Gioacchini was passionate about soccer, was secondary but it did give him a boost in his career when he decided to play for Paris FC before moving to SM Caen in 2018.

“My dad's work brought all of us overseas,” Gioacchini explained. “That is the reason I got here. It wasn't even football - but I was still extremely passionate about it. I decided to continue it here.”

Growing up, Gioacchini watched mostly European soccer and is a supporter of AC Milan. While living in Kansas City, he once attended a Sporting Kansas City match as a child.

But internationally, Gioacchini was a fan of the United States national team despite having a father from Italy and a mother from Jamaica.

For the younger Gioacchini, his bond with his country’s national team became even tighter when he received a call from United States national team head coach Gregg Berhalter ahead of the scheduled March friendlies against the Netherlands and Wales.

As Doug McIntyre of Yahoo Sports reported last week, Berhalter said Gioacchini was in strong consideration for a call-up for those games. Should that have happened, it would have been his first call-up at any level. Prior to that call, Gioacchini had never heard from U.S. Soccer.

“I didn't even know it was him,” Gioacchini said of his call from Berhalter. “When I did realize it was him, I was like: whoa. It was quite an honor to see his number on my phone…I was not expecting that. I've been wanting to be with the national team for a long time. It is any kid's dream. As soon as I heard about it, I was so happy that it looked like I was in shock. It's been my dream since I was young and it's what I want to do. Representing your country is every kid's goal but not everyone can reach that. It's only a few selected players. I felt really honored and happy.”

Gioacchini is also eligible for the U.S. U-23 team which will attempt to qualify for its first Olympics since 2008 and he also admits that he would be happy to take on that role as well (“It's still being part of that group -  which would be great”).

The thought of playing for the United States is a far cry from where Gioacchini was just a year ago when he was still with Caen II but that goal has become more realistic in recent months and it is something that is now a motivating factor.

These days, Gioacchini (who is fluent in English, French, and Italian) tries to get back to the United States as much as he can to see his grandparents and cousins that still live there. But while his busy soccer schedule has prevented him from traveling back often, the national team might be the reason he returns.

“I watch all of their friendlies and the World Cups that they've played in,” Gioacchini said of the U.S. team. “I watched Landon Donovan and Clint Dempsey - those were always my idols, Jozy Altidore too. I really appreciate all those players playing for their country. I want to play for it too.”

“I love playing here at Caen in France,” Gioacchini said. “But if this national team brought me back, it would always be a joy.”