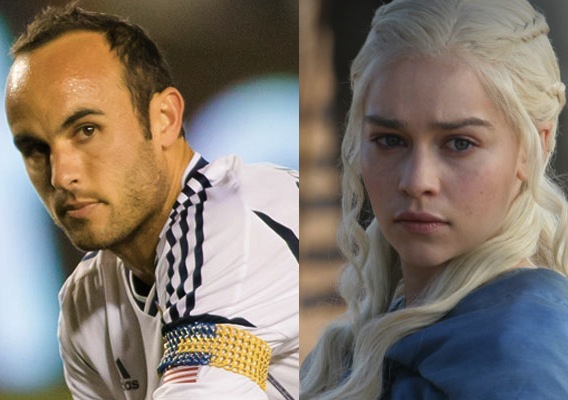 If you've never seen the HBO series Game of Thrones, this article won't make any sense to you. Even if you are a regular viewer, you may wonder what Daryl Grove was thinking. We're right there with you.
BY Daryl Grove Posted
June 21, 2013
9:58 PM
Has the absence of Game of Thrones left a hole in your life the size of The Wall? If so, we have something to tide you over—and it’s not milk of the poppy.It’s the United States men's soccer team. In case you haven't heard, soccer is on the rise in America. But the sport could still use a lot more fans—ideally a few million maniacs with a proven track record for obsessive behavior. So if you're one of those—how shall we put it?—committed GoT fans looking for a distraction between seasons 3 and 4, we suggest you affix your gaze on an epic adventure we call U.S. World Cup qualification. The stakes could not be higher. It's populated by ambitious men with pride to spare. There's random violence that occasionally goes unpunished. And the narrative is meted out in 10 sequential "episodes" that have a sinister nickname: The Hex. There's even a game on tonight (9 p.m. Eastern; ESPN, UniMas). What do you think—ready to give it a try? If so, start here with our guide to U.S. soccer icons and their Game of Thrones alter egos.

Brash youngster destined for greatness after early success, but failed to heed the advice of colleagues and mentors and now will never fulfil his destiny. Worse news: Bahia’s club anthem is “The Rains of Castamere.”

Brutally beheaded in 2011 for playing the game too directly. In times of trouble, he’s still referenced as a positive, steadying force. But we all know the show wouldn’t be as much fun if he came back.

Brilliant but distant. Has the skills to save us all, but too busy exploring foreign lands and thinking about dragons.

Because of the dirty hair.

Possible captain for life, but (allegedly) can’t resist the charms of a woman who he really should have stayed away from, and that means trouble for everyone.

Shiny-headed, calm under pressure, and always plotting three moves ahead. But we’re pretty sure MB90’s junk is intact.

You didn’t like him at first. He seemed aloof, hot-headed, arrogant. But now you know why he does the things he does—whether slaying the king or charging down defenseless German goalkeepers. He fits into the system and you feel a lot more loyalty to him. And you wish he wasn’t injured.

He had to choose between two families, and in the end chose the one that offered the better shot at glory. His adopted kinsmen will never forgive him, and now he has a horrible injury. Though I’m sure Theon would gladly trade his recent, erm, surgery for Rossi’s ACL troubles.