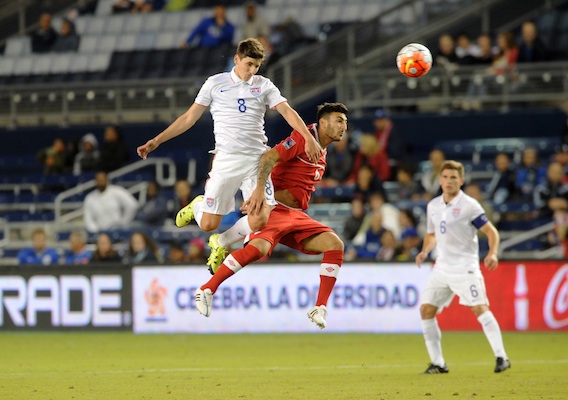 The 19-year-old midfielder is buried on the bench at Craven Cottage but he has made a positive impact on the U.S. U-23 team as it seeks to qualify for the 2016 Olympics.
BY Brian Sciaretta Posted
October 08, 2015
11:45 AM

WIL TRAPP AND LUIS GIL may be the midfield ringleaders for the U.S. U-23 men’s national team that will try to secure a spot in the 2016 Olympics on Saturday, but Emerson Hyndman has been a very welcome addition, making a seamless transition from captaining the U-20 World Cup team into becoming an integral part of the U-23s.

“It’s been quite easy, to be honest,” Hyndman said. “A lot of us came up from the U-20 team, and the U-23s, who have been established under our coach, Andi [Herzog], have taken us in and kind of shown us the ropes, if you will, with their team. We’ve adapted well.

“It didn’t seem like it was a new team to me. There were some older players, but they were just as friendly and just as good on the ball — it felt like the same team.”

Given that Herzog only had one camp to integrate the former U-20 players into the U-23 group, not much was known about how this unit would play or what formation it would use. Through three games, however, the style has become pretty clear—a narrow diamond formation that is simple but effective.

The two forwards, Jordan Morris and Jerome Kiesewetter, use their pace to make runs in behind the defense, and the team’s technically gifted midfielders, Hyndman included, have had a field day playing them in.

“As a center midfielder who likes to pass and control the ball along with forwards who can run behind the defense, it’s a dream,” the 19-year-old Hyndman said. “If Jerome makes a run, I am going to try to find him. It goes the same with every other central midfielder we have. If the game is just played in front of the other team, it is kind of easy for them. We have two with great pace, and it just changes the game.”

“For me it is not a surprise,” Herzog said. “Emerson Hyndman has already played for Fulham in the Championship. I know his skills and his talent, so even if he is young, he knows what to do with the ball in every single situation—how he has to pass the ball, how he keeps the ball, how he turns.

Heading into the Olympics-deciding semifinal match against Honduras, Hyndman has made a strong case to start. He made one of the best passes of the opener against Canada with a through-ball that sprang Kiesewetter, and he shredded Cuba with his passing—even scoring a goal on a combination play with Gil in the second half.

“We kind of read each other here and there,” Gil said. “We understand each other, and we know what we’re each thinking of ahead of time. That play on the goal was a give-and-go and I knew where he was going. It’s great to have a player like that on the field.”

Team captain Wil Trapp added that Hyndman contributes significantly to the possession game—not just with his passing but also with his ability to hold the ball.

“He's very mature, very skilled, with a great range of passing and great vision,” Trapp said of Hyndman. “His composure is something that I look at and think it's very impressive. In tight spaces or when he has time and space, no matter what, he's always composed, poised, and always finds the right pass.”

When the tournament ends, however, Hyndman will return to a complicated situation with Fulham. He joined the team’s academy in 2011, when he was just 15, and rose all the way up to the club’s first team last season, making his debut in the Championship. A shoulder injury, as well as U.S. U-20 commitments kept him away for the second half of Fulham’s season, though, and things have only gotten worse since his return.

Now in the final year of his contract, Hyndman has made public his desire to go elsewhere.

“It’s a little difficult right now,” he explained. “I’ve told them in the past that I think it’s time for me to move on. There are clubs out there that are interested and that I am excited about, so it’s difficult for me right now, and I can’t see myself getting too many first-team minutes. I feel that I had a good preseason, and I thought I might get a chance, but I am really looking forward to the future more than anything.

“I am looking at all possibilities and I am not ruling anything out yet,” Hyndman added. “I am keeping everything open. I think a style-of-play change would be helpful for my development at the moment. I think it would swing me forward quicker. All I want to do is play and get first-team minutes consistently.”

While his time at Fulham looks to be ending, Hyndman knows that exciting new opportunities are in store for him in 2016.

If the U.S. wins on Saturday, the Texas native has a very real chance to represent his country in Rio de Janeiro next summer. And a strong showing in the Olympics could help Hyndman make the transition to the U.S. senior team.

For Hyndman, that goal is only 90 hard-fought minutes away.

“We are looking forward to making our own history and going to the Olympics,” Hyndman said, referencing Satruday’s showdown with Honduras. “I grew up watching the Olympics just as every other American did. It’s one of the biggest sport events of all time. To have the chance to be involved in it would be a dream.”