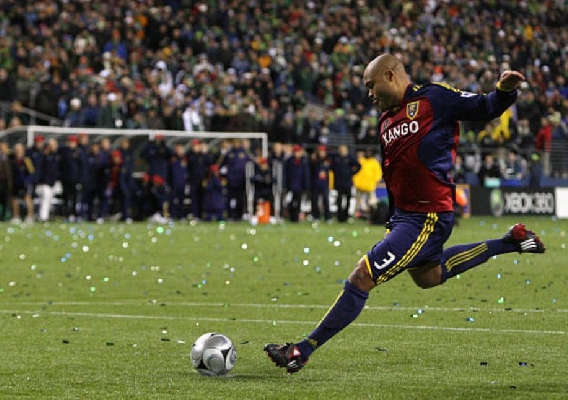 As a player, Robbie Russell accomplished a lot - playing in the UEFA Champions League, winning MLS Cup, and being a runner up in the CONCACAF Champions League. But following his career on the field, Russell went to medical school and is preparing to deal with COVID-19 pandemic. ASN's Brian Sciaretta spoke at-length with Russell on his life and career.
BY Brian Sciaretta Posted
April 14, 2020
10:00 PM

WITH THE GLOBAL pandemic of COVID-19 shutting down economies and forcing most people to remain at home, soccer leagues throughout the world halted play. But with the sport on the backburner for now, there is one former player who is preparing to be on the front lines in the battle against the virus.

Robbie Russell, 40, played his last game on April 21, 2013 when he entered as an 84th minute substitute in DC United’s 3-2 loss to the Philadelphia Union at RFK Stadium. Three weeks later he announced his retirement from soccer and his decision to attend medical school at Georgetown University.

During his playing career Russell achieved a lot. He won a Norwegian Tippeligaen title with Rosenborg, scored the winning penalty for Real Salt Lake in MLS Cup 2009,  participated in the group stages of the UEFA Champions League, and was the runner up in the 2011 CONCACAF Champions League.

Russell is now early in the stages of his career as a doctor but is preparing to deal with the COVID-19 pandemic. He is currently based out of Charlottesville, Virginia in an emergency room where the number of COVID-19 cases there are relatively small. But that is something he knows can change. Managing that while his family is based in northern Virginia has been a challenge.

“I think it's been more of all the preparations that have been going on and there's a lot of tension and stress about being prepared with protective gear. It's a little bit scary and it's a little bit nerve wracking. You hear these stories coming out of New York. I'm trying quarantine from family right now and had a long debate with my wife about whether or not I would be coming home this week because you can't say there's zero risk in terms of my kind of exposure level. Trying to take all of this information gradually coming in and trying to make real life decisions with it - it can be ambiguous and not clear. I think that's what gets everyone a little bit stressed.”

“We're trying to get everything in place because we fully expect to turn into a hotspot and hopefully, it doesn’t,” he added. “I think the biggest concern now is the fact that we're not entirely sure about our numbers for masks. If our numbers start to go up, will we be ready?”

These days, the American public is showing appreciation for those in the medical community dealing with the pandemic due to the danger they face. The career choice that doctors make weighs on a lot of factors and Russell was no different – despite him joining the field at a later age.

Born in Ghana, Russell is the son of parents who were in international aid. His father is American and his mother is Ghanaian so Russell had American citizenship since birth. For the first decade of his life, he moved back and forth between the United States and Ghana. When he was 10, he and his family moved to Sri Lanka for his parents’ work.

As a soccer player, he played with family in Ghana admitting he was “terrible” and that the only reason they let him play is because he had a ball. Then in Sri Lanka, he mostly played on his own.

When he returned to the United States to attend high school in Massachusetts. It was there he began to blossom as a player and eventually earned acceptance into Duke University.  At first, the plan was to major in pre-med because, according to him, he was inspired by his parents working in international aid and was trying to figure out what was “the best marriage between a job where you love science but you also want to help people? For me, medicine was that perfect marriage.”

But that was easier said than done. Russell failed his first calculus exam in school and he needed to keep a high GPA to maintain his scholarship. From there he shifted to a liberal arts degree as his collegiate soccer career took off and he was one of the best players in the NCAA.

“I was like: I'm guessing science isn't for me,” Russell recalled. “And by this time, playing had taken over. I assumed that maybe I'll just kind of do what all the other guys I know who were athletes were doing - you get like a sociology degree or a statistical analysis degree and then become an I-banker or something. I ended up getting drafted after I graduated and decided to kind of forego that and went over on trial in Europe… I always dreamed of playing in Europe. At the time, I didn't necessarily think [MLS] was as established. I didn't think the quality of play was where I wanted. It seemed as if the best players were trying to go to Europe first.”

Russell was able to land a contract with Sogndal in Norway’s top flight. He was converted from a winger to a right back and became one of the best players in Norway at that position. From there, he earned a move to Rosenborg which was the strongest team in the country at the time and one of the best in all of Scandinavia.

In 2004, Russell won the Norwegian title with Rosenborg and it was also there where he helped his team qualify for the group stages of the Champions League where he continued to start.

“Being able to walk out into the stadium and hearing the Champions League song going over the loudspeakers as you're walking out and seeing the big Champions League logo and UEFA stars - that's all real,” Russell said. “It all happens on the field and it's phenomenal. My first game was at home against Arsenal. It was a big deal for me. Vieira was in the middle. I was up against Jose Antonio Reyes on my side. It was all of my dreams are coming true. I go to step up and the ball gets played out to Reyes. I step up to him and he takes a touch by me and kicks it down the line. I'm thinking, I've got like 10 yards on him, I should be fine. I go to turn and chase the ball down and literally by the time I've turned, he's already five yards past me. And luckily the ball went out of bounds. But I was like, OK, this is going to be a long day.  It's entirely another level when you're playing against the biggest stars in the world and they're turning it on. It is something special.”

But as soon as his career started to take off, it hit a serious road block. At Rosenborg, he suffered a meniscus tear in his knee. He opted for an different type of procedure and suffered painful complications in how his body reacted to it. For the better part of 18 months he was barely able to play.

He made the move to Denmark to get his career back on track with Viborg but at that time he felt he had to make two very important decisions. The first was that he believed it was time to make a return to the United States to continue is career.

The second, is that the time away from the game made him wonder what he wanted to do once he could no longer play. His girlfriend at the time (now his wife) had moved to Europe to be with him and her father was an emergency room doctor. In a discussion about life beyond soccer, Russell mentioned to him that he once wanted to be a doctor. He figured his future father-in-law would laugh at the idea but was surprised when he encouraged the choice.

But Russell was not done with his career. Real Salt Lake wanted to sign Russell and due to the complicated MLS rules at the time for bringing back Americans from Europe, was willing to make risky trades to seal the deal.

Russell thrived at Real Salt Lake while also taking the first steps at furthering his interest in medicine. He tried to enroll in classes at the University of Utah but couldn’t qualify for in-state tuition at the time. While that route wasn’t available, he began to work with RSL’s team orthopedic surgeon, Dr. Andrew Cooper, where he could come in on his days off from playing and shadow the doctor for the day.

Eventually his wife took a job back in Washington, DC and Russell was able get a trade to DC United at the end of 2011 before eventually retiring 18 months later.

“Just watching the quality of the league, it's been going up, the amount of talent that they are bringing into the league - it increases every year,” Russell said. “The new teams that are popping up everywhere is phenomenal. These new teams seem to have, it is like the experience I had in Europe or in Central and South America - is that passion of the fans... and fans that are willing to put in extra time to put together stuff. That's really amazing to watch that. Between when I started and between what it's like now, it's night and day.”

“I would honestly say that when I first started MLS was probably below the Scandinavian leagues,” he added. “But to this point I'd say the top five teams in Scandinavia would still kind of probably do pretty well in our league but I would say from top to bottom, our league has a lot more quality - except maybe the bottom one or two.”

But for now, he is preparing for the COVID1-9 pandemic to make its way into his area of Virginia and he still goes through daily emails where he gets the latest updates on treating the virus.

Russell still hopes to stay involved with the sport from a medical perspective – perhaps working with MLS on medical protocols and plans – or maybe as a trainer one day.

While Russell is passionate about medicine, his love for soccer remains and he will take the lessons he learned from his playing career with him wherever he goes.

“The idea being that I've never had that national team experience – it would have been nice to have. But my career was pretty sweet. It actually took me down some very, very cool roads. And I got to do a lot of really big football things that I never expected to accomplish.”