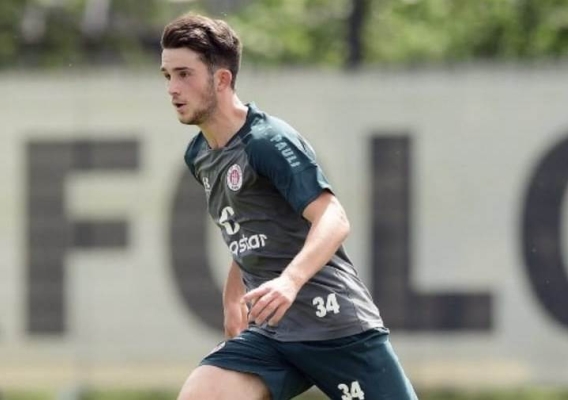 Leon Flach was one of the players who impressed at the recent U.S. U-20 camp in Florida but that was one of just many promising steps the young German-American hopes to take in 2020. ASN's Brian Sciaretta spoke with Flach about this important stage of his budding career.
BY Brian Sciaretta Posted
January 22, 2020
9:30 PM
THE UNITED STATES U-20 national team recently completed its first camp of the year in Florida and what is different about this cycle is that it essentially begins only six months before the start of the U-20 World Cup qualifying tournament. With only two camps before the final qualifying tune-up, players have to make solid first impressions to build their case to be on that roster.

Leon Flach, 18, did just that with a strong camp in Florida where he showcased his versatility and his ability to integrate into the team well. Currently signed to a professional deal with St. Pauli of the 2.Bundesliga, this was his first time representing the United States at any level.

But not only was it a challenge stepping into a team where many of the players were familiar with each other, injuries among the roster forced him to play the left back position. Flach is normally a central midfielder with the youth and reserve teams of St. Pauli. However, when Flach trains with St. Pauli’s first team, he plays left back which he says is easy for him with his left-footed nature.

So when the U.S. U-20 team faced off against Mexico, Flach was prepared for the opportunity at left back – which he seized in a solid outing of a 2-0 win over the U.S. team’s archrival. Despite not knowing the players or the coaches in advance, he was satisfied with the team’s performance.

“I think we had a really good team performance,” Flach said of the win. “We did it really well. I think all what we wanted to do, we did it. It was a really good performance by all of us. I was really proud. Playing with the crest on my shirt was really good for me and I enjoyed it… There is a great atmosphere in the team. Everybody is nice to me. I received a really warm welcome. I enjoyed it. The majority of players are new to me. I know some players who play in Germany, just two of them.”

Overall, his first impressions of the team were extremely positive both on the field and off the field. Coming in he wasn’t sure what to expect, but he left camp looking forward to more. Overall, the quality of the team surpassed his expectations.

Flach also realized this was the first U-20 camp under new head coach Anthony Hudson. The style Hudson used was similar to the way Gregg Berhalter is using with the full national team. While he is used to playing a more direct way in Germany, he was interested in the U.S. team’s approach.

“I think especially on offense, it was better than I expected,” Flach said of the team. “They were really good guys offensively with the ball, really talented. I think they are all better than I expected. It's a bit different system that I am used to but I think it's good and a really interesting one. We want to press high with one guy off the ball and we want to make the game. And I think that is a really good way of playing, especially when we have such talented guys in the offense. [Anthony Hudson] talked to me a lot and he's a nice guy. I like the way he's having us play.”

Celtic winger Cameron Harper is considered one of the best American players of the current U-20 age group and he was also one of the best players in the win over Mexico. He was unfamiliar with Flach prior to camp but believes he has a lot to offer this team moving forward, especially with the aspect of versatility – which is often needed in tournaments.

“I thought he was very good,” Harper said. “He came into camp as a No. 6 and started off really sharp, he’s a player that likes to get the ball and play forward passes breaking the lines but due to the two left backs having to pull out with injuries he went to left back to fill in and was very impressive there too. In the first game against Mexico he was very aggressive defensively when he had to be and never really got beat, and seemed like a pain to play against. He held possession really well, his personality also makes him very easy to play with. He’s a very nice guy on and off the pitch and, overall, I thought he was very good throughout the whole camp especially saying he had to move positions midway through it.”

While this was Flach’s first time playing for the United States, it is not his first involvement in international soccer. In 2019, he was called-up multiple times for Germany’s U-18 team with his debut coming in a 1-0 loss to Austria followed by a 3-0 win over Belgium.

Flach’s parents are German but he was born in the United States during a period when his family lived in Houston where his father worked. During his early childhood, the family would return to Germany in Hamburg where he was raised and developed as a player with St. Pauli.

Occasionally Flach returned to the United States where he still has friends – although his last visit prior to the U-20 camp was four years ago. To this date, he remains a huge fan of Houston Texans of the NFL. He travelled to London back in November when the Texans played a game at Wembley Stadium and he watches almost every one of their games on television.

While this most recent camp was his first time representing the United States internationally, it was not the first time U.S. Soccer has attempted to bring Flach into the fold. In fact, it was the fourth time that proved to be the charm for U.S. Soccer.

“It had always been in my mind that maybe I will play for the USA one day,” Flach explained. “I had already had invitations [with the U.S.], but it was always a bit difficult to get in here because two times I was injured and one time it was bad timing because of my graduation. Now I'm happy that everything was perfect with the timing. I'm happy to be here.”

And the U.S. U-20 camp was just one of many big steps Flach hopes to take this year. In addition to U-20 World Cup qualifying this summer, Flach is expected to be part of St. Pauli’s first team soon. The team currently sits in 11th place of the 18-team 2.Bundesliga.

When Flach signed his professional contract in 2018, it was also announced that the start of the 2020/21 season would see him join the first team formally. Although, he might join that team sooner than later as he has already trained at that level (only to see an injury cut that time short) and he would have played there over the winter break but instead chose to join the U.S. U-20 team.

“It's a little difficult in my case because last time I was promoted to the first team, I got injured after five training sessions,” Flach said. “So, I had to do my rehab for almost three months and then I went back to train with the U-19 team because I still had some problems with my knee. But if I wasn't with the US team right now, I would be with the training camp with the professionals. When I'm back in Germany, I hope I get there with the professionals soon as possible. We will see but I hope so. But for sure, I'm going to the pros next summer for preseason.”