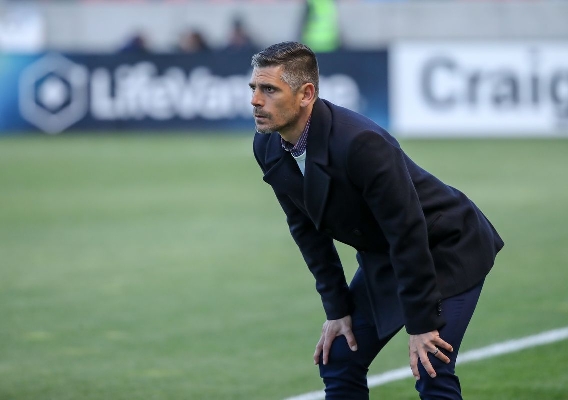 The COVID crisis is hitting everyone in the soccer world and FC Dallas is thinking of new ways to approaching the game both during social distancing and once play resumes. ASN's Brian Sciaretta reports
BY Brian Sciaretta Posted
March 26, 2020
11:10 AM

THE CURRENT STOPPAGE due to the COVID-19 virus is hitting clubs throughout the entire world as most of leagues have come to a halt for an indefinite period. It has forced teams to adapt and think for solutions in maintaining team unity in unusual times.

For FC Dallas, the team is taking various to keep his team engaged – both with topics related to soccer and socially as well. Head coach Luchi Gonzalez understands he has one of the youngest teams in the league and a large number of U.S. youth internationals comprise of the team’s core.

Like most teams, the players are working out individually with mostly fitness oriented drills issued out by members of the coaching staff.

Starting on Monday, Gonzalez will begin utilizing Zoom software to have meetings to go over the technical side of the game. It will be broken down by positions with goalkeepers, defenders, midfielders, and forwards all having separate group meetings.

During these meetings Gonzalez and the staff plan on going over game videos to intensely analyze tactics. This will entail not only watching video of Dallas and other MLS teams that will be opponents once the season resumes, but also watching video from European clubs to get ideas for different approaches. This will be done in three-week cycles.

"We've created a three-week cycle of technical, tactical, concepts that we're going to use in small groups in positional conference meetings with staff and players,” Gonzalez explained. “For example, with the backline - just building out of the back, building in the middle third, destabilizing the middle third to reach the last line, and their role when we're in the offensive third, transitions. Then with counter-principles, what is the backline's role when we are reorganizing in the mid-block and defending. What is the backline's role when we're defending low?”

“We're creating fundamentals and principles in each of the groups we already have,” he added. “But we're doing them for a three-week cycle. That's as far as we want to plan.”

But Gonzalez also realizes that tactics and the technical side of the game are just one component of building a team. For any successful team, there is also a comradery and bond that must be built and maintained.

In the era of social distancing and home isolation, the team concept is very much at risk of becoming the first casualty. For Gonzalez, using technology to keep the team connected is critical – even if it means talking and discussing things apart form soccer.

“We want to have team calls, in small groups,” Gonzalez said. “We're going to do some level of player quizzes. The players are going to have some competition with each other. Maybe there are some video games that are multiplayer and the players can compete in tournament style things - even if they've never played video games before. It's just something that can engage them, stimulate them, and keep everyone together. We're also going to ask players to share things with us. What are their favorite songs? Favorite movies? Things that are personal that maybe they're not sharing in a normal setting. We have to get creative and think outside the box to find ways to stimulate each other and connect.”

Midfielder Paxton Pomykal is a big part of Gonzalez’s plans and the start homegrown player only recently recovered from an offseason hernia surgery where he also dealt with a setback that forced him to miss the U.S. national team camp in January and a portion of the FC Dallas preseason.

Pomykal has been reaching out to teammates on a daily basis and moved back home to deal with the global pandemic. It is there were he has found a way to train with his brothers and also utilize the family’s backyard to do drills with the ball – an aspect that many players are finding challenging.

“That is probably the toughest part of it all - preparing so hard during preseason, putting in the effort to get ready for the next nine months and then that being put to a halt,” Pomykal said. “Then you have to figure out other things to do and spend your time differently. With the ball, we're limited to our space. Finding time with the ball is toughest time.”

For Pomykal, the shutdown has come at an especially difficult time. He had finally recovered from his offseason hernia surgery and was feeling the best he had in a long time. Pomykal was also selected to the U.S. U-23 team where he was expected to be a leader in the Olympic qualifying team.

Gonzalez is quick to notice that Pomykal has had to deal with a lot of setbacks recently but also notes that he will be better for it as his career develops in future years.

“Paxton is a soldier,” Gonzalez said. “It's tough when you see in his eyes that and you know in his heart how much he wants something and, for whatever reason, it doesn't come easy for him. That is an accomplishment to him and his teammates. His teammates give him a lot of love and support... I saw a lot of pain in his eyes with him not being cleared for certain things in preseason because there were setbacks because of his healthy and recovery from surgery. At the end of last season, his hernia was really bothering him. He was pushing through tough pain as best as he could.

“Now with the Olympics and he's worked his butt off to earn certain opportunities with the senior team,” he  continued. “I would say he would be a leader with the U-23s... You can see how calm he is, how mature he is, he puts things into perspective. He comes from a great family.. I am really proud of him and I happy he is going through these experiences because it will make him even stronger.”

Pomykal was not with the U-23 team when the Olympic qualifying tournament in Guadalajara was postponed. He was scheduled to join the team at a later date. He spoke with U.S. U-23 head coach Jason Kreis last week and was on the phone with teammates Chris Gloster and Djordje Mihailovic to get a sense of the situation.

Despite the disappointment of the postponement, Pomykal sees the bigger picture in the global crisis.

“There are so many more important things to worry about than the Olympics,” Pomykal said. “There are hundreds of thousands of people losing their jobs, living pay check to pay check. For me to be upset about a little tournament that is going to happen eventually is selfish. I am not too upset about it. I am more concerned about the general well-being about everyone else.”

While MLS still has its targeted return date of May 10 in its sights, Gonzalez knows that the situation remains fluid and events are changing on a daily basis.

Whenever the ball rolls again in competitive matches (whether behind closed doors or in front of crowds), Gonzalez understands that teams will be in an uncomfortable and naturally rusty but acknowledges all the teams will be in the same situation. He also said he hopes to have at least one or two friendlies prior to the restart of the season.

For now, Gonzalez will simply plan as best he can. One of the aspects he thinks will make this season unique, whenever it does resume, is that it will be a true test of depth due to the likely congested schedule that awaits.

But regardless, heavy squad rotation is now on his mind, and the mind of other coaches, for the remainder of the season.

“We were prepared for that this year when we put our roster together,” Gonzalez said. “We were going to have that this year with the Olympic qualifiers, maybe the Euros, and we have a lot of youth national team guys. Those are all optional releases. We don't have to release every player to a U-20 camp…The U-20 qualifiers and U-17 World Cup are important moments for players and we support those things.”

“Because of the density of the new schedule that could come out.. those are going to be tough weeks where everybody is going to have to be ready to contribute,” he added. “I have to be very aware of our players and the miles on their legs and their mental state and their health. We are definitely going to have our rosters challenged. I believe at the end of the season, when there is an MLS Cup winner, it'll be the team that had the depth and the entire teams was finding solutions.”