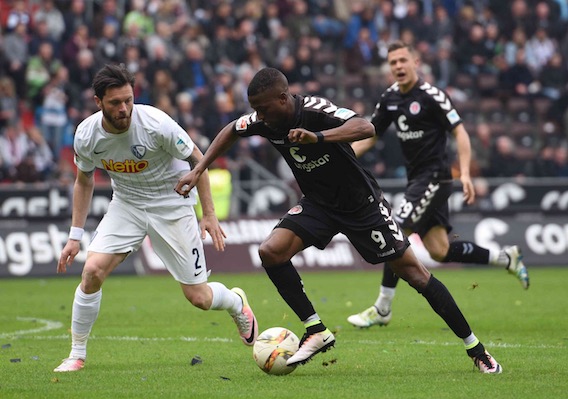 The 25-year-old forward has loads of talent but until recently he has struggled to find the right situation. Now thriving with 2.Bundesliga side St. Pauli, Picault feels his career is now on an upswing.
BY Brian Sciaretta Posted
May 02, 2016
11:00 AM

WHEN JURGEN KLINSMANN compliments players for pushing themselves against top competition in Europe, he’s usually referring to familiar names like Fabian Johnson, Alejandro Bedoya, or even now Christian Pulisic. Lately a new name has crept into the mix: St. Pauli forward Fafa Picault, who has scored three goals in his last three games for the 2.Bundesliga side.

While most American soccer fans might not be familiar with his name or his game, Picault believes his current run of form is to be expected—and long overdue. The New York City native has always exuded confidence.

“I’m happy with the recent performances,” Picault told American Soccer Now from Hamburg. “I started out well when I first got to the club. It slowed down a bit. I felt a bit out of position. We had more of a defensive approach to the game. It wasn’t really fitting my style. With a few injuries I was able to be the sole striker up top.

“That is exactly what I needed: freedom. So I can express my speed and creativity to look to score or get assists and just be myself. It allows me to be me.”

Finding the right club situation has proven difficult for the 25-year-old. After establishing himself as a youth player in Miami, Picault secured a move to Cagliari’s primavera team in 2008. There he developed a friendly relationship with first-team coach (and current Juventus coach) Massimiliano Allegri.

The situation would turn ugly, however, after Allegri left the Serie A team. Picault was the team’s only black player and faced racism within the Sardinia-based club. He then had a falling out with the reserve coach, which prompted him to return to the United States.

Picault joined the NASL’s Tampa Bay Rowdies in 2012 but struggled to establish himself there, which prompted to return home in 2014 and play for the Ft. Lauderdale Strikers. The fit proved to be ideal and Picault scoring 12 goals in 24 appearances.

“I went back to the states thinking it would be easy to find a big club in MLS,” Picault recalled. “I was with the U.S. U-20 team. It wasn’t so easy so I went to the NASL. I think it was very important because I left home pretty young. With the Strikers, we had a great comradery. Especially with Günter Kronsteiner who is probably one of my favorite coaches I’ve played under. He allowed me freedom to express myself and that was very important. That was a really good time for my career.”

It was also at this time that Picault met DaMarcus Beasley, the veteran U.S. international who owns a house in Miami and trained with Ft. Lauderdale in 2014 before that year’s World Cup. Beasley has served as a mentor to Picault who considers the four-time World Cup veteran and current Houston Dynamo left back a major influence.

Beasley, in turn, thinks Picault is someone who has the talent to make an impact with the national team.

“As far as personality, he is a great guy,” Beasley said of Picault. “He is funny and is liked by his teammates. He has all the potential in the world—all the tools to become a top striker. He is quick, he is strong, he has a nose for the goal and he wants to get better.

“What impressed me the most is he is hungry. You don’t see that with all young players. He wants to be in a World Cup someday and he wants to play for the national team. I saw it every day in training, he has the heart. We’ve talked since he’s been scoring all these goals and it is great to see. If he does get a chance with the national team, he definitely will take advantage of the opportunity.

Despite his success at Ft. Lauderdale, Picault wanted to return to Europe quickly as that is where he felt most at home football-wise. Fortunately, Strikers goalkeeper Kamil Contofalsky was able to help him organize a move to Sparta Prague.

His time at Sparta was brief. He joined in the winter of January 2015 and performed well during winter preseason camp but ended up suffering an injury which kept him out for three months. When he returned at the end of the season, the club had made a coaching change and he requested a release.

Picault quickly found a new club after impressing at St. Pauli last summer. He is finally showing his ability as a starter and even recently earned the praise of club officials. Head coach Ewald Lienen said last week that "Fafa has done his job very well." Sporting director Thomas Meggle added, "to play against him is disgusting." St. Pauli recently extended Picault’s contract through the 2017-18 season.

“It’s been rough,” Picault said of his circuitous career path. “It’s difficult when you know you have the talent and you have to deal with a lot of ups and downs. The important thing is believing in your talent. I’m feeling like myself again. I have no question in my head about what I can and can’t do. I feel like I can play against anybody.”

Klinsmann remarked that U.S. Soccer is keeping tabs on this enigmatic striker.

“The coach at St. Pauli, Ewald Lienen, mentioned to me a few times that there’s a kid who is extremely hungry and wants to prove a point,” Klinsmann said. “He said he has a way to go, but to just follow him. Now over the weekend he scored two goals in a big game in front of 30,000 people and got them really excited…..So Fafa—the way they call him—Picault is a unique player, a counter-break player and very fast.”

The attention from Klinsmann creates speculation as to whether or not Picault will earn a U.S. national team call-up in the near future. While Picault did not make the preliminary roster for the Copa America Centenario, there is an friendly against Puerto Rico in May that will feature non-MLS players.

When you consider that Bobby Wood is the only healthy, high-level forward playing overseas, Picault would seem to have a good chance of a call-up. In addition to public recognition from Klinsmann, he also received an encouraging phone call from the coach.

“That was definitely an up-lifter because I went through my own bit with the U-20 team and I don’t want to go too much into it—but a lot of difficulties happened,” Picault said. “This coming around now and hearing from Klinsmann, seeing the tweets and comments, and knowing I’m back to being where I expected to be long ago, knowing I’m back in that radar—it is perfect for me.

Picault is no stranger to interest at the international level. He was born in Manhattan and moved to Miami at the age of nine. His parents are Haitian immigrants and therefore he holds dual citizenship. Picault’s family also has very strong ties to the sport. His father, Leslie Picault, played professionally at the indoor level for the Philadelphia Fever. His maternal grandfather, Max Antoine, was a star in Haiti and played for the national team.

Haiti’s national team is well aware of Picault and first called him up for a friendly against Chile in 2014. A minor injury kept him from suiting up but Picault did watch from the bench and admits that “to be able to wear the same jersey that my grandfather wore was also a beautiful thing.”

Should the United States show interest, however, Picault knows where his heart lies.

“I know I am more American than anything,” Picault said. “I’m born and raised in the States. I’m as New York and Miami as they come. You have to choose one side and I do feel more American—but with respect and love for my roots.”

And yes, he is eager to show Klinsmann and the rest of the country what he can do on the international stage.

“I would definitely be happy and it would be a big milestone for me,” Picault said of a potential U.S. call-up. “Of course, you set your new goals from there once that does come. That would be my time to prove that not only I belong but that I can make a big impact with the national team."