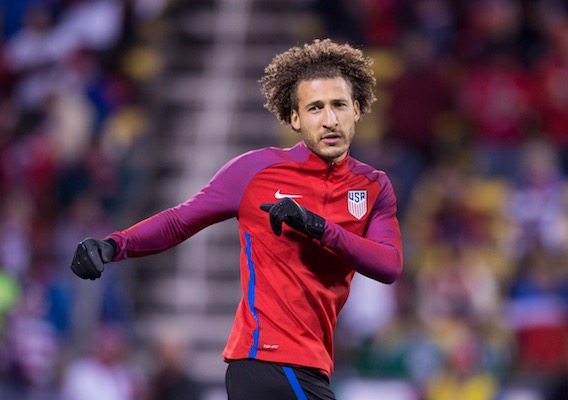 Fabian Johnson on Bruce Arena: "We Had a Nice Talk"

The top-ranked player in the ASN 100 spoke to American Soccer Now about his December meeting with Bruce Arena, his return to health, Christian Pulisic, and his belief that the Yanks will qualify for Russia.
BY Brian Sciaretta Posted
January 16, 2017
5:30 AM

Johnson, 29, is among the best American soccer players in the game right now but there is no question that he struggled, mostly due to injury, during the second half of 2016—for both club and country.

He battled an Achilles issue that limited his time on the field and the United States men's national team opened the Hexagonal in disastrous fashion, costing Jurgen Klinsmann his job.

Meanwhile, Broussia Monchengladbach was eliminated from the Champions League in the group stages and the club now sits in a disappointing 14th place in the Bundesliga—just three points from safety. As a result, Monchengladbach also changed managers, bringing in Dieter Hecking during the annual winter break.

That's a lot of change to process, but Johnson is determined to keep a positive outlook. He admitted that it “is a tough situation” at Monchengladbach but he is ready for a new chapter and believes the team will make a climb in the standings.

"I think so,” Johnson told American Soccer Now when asked if he was going to be ready to kick off Monchengladbach’s second half of the season against Darmstadt on January 21. “I am feeling better every day. I am doing well. I will be with the team when they come back from training camp on Friday.”

While club obligatons prevent Johnson from paticipating in the U.S. national team's January camp, he will no doubt play a prominent role when the Americans play two crucial World Cup qualifiers in March. And he will be doing so, of course, for new U.S. boss Bruce Arena.

Johnson was somewhat surprised that Klinsmann was fired after the Costa Rica defeat.

“There were rumors about it that there might be a change with the manager,” Johnson said. “I wasn't expecting anything. It's always different when you get a new coach. Throughout my career I think it is not always good if you change coaches a lot. It doesn't look good for the team but also the players are in the driver’s seat. At the end of the day, we have to perform on the pitch.”

Johnson added that he was “thankful” Klinsmann gave him a chance to play international soccer. Johnson’s first-ever international call-up came less than a month after Klinsmann was hired in 2011. The two did not always have a positive relationship, however, as Klinsmann publically questioned Johnson's ability to play through an injury in the 2015 CONCACAF Cup and dismissed him from the team ahead of a friendly. Still, Johnson prefers to remember his time under Klinsmann in a positive light.

Arena, recognizing the importance of Johnson and several other Bundesliga-based players, flew to Germany shortly after he was hired to introduce himself and establish a dialogue. Not surprisingly, the topic of Johnson's preferred position came up.

Under Klinsmann, Johnson typically played left back although he was moved to right back for the 2014 World Cup and performed well. Johnson played sparingly on the wing for the U.S., which is where he plays the overwhelming majority of the time for Monchengladbach. Klinsmann realized that Johnson was primarily a midfielder although the temptation to play Johnson at left back was too great given the Yanks' lack of options at that position.

So where will Johnson play under Arena?

“I met with Fabian in Germany,” Arena said in December. “His answer to me was, 'I can play either position but I would just like to play one of them and have a little consistency with where I play for the national team.' We're going to evaluate him over the next few months and take into account where he is playing with Gladbach...but obviously he is going to play on the left side of the midfield or at left back."

“I knew that he used to coach the team and I knew he was the former coach of the L.A. Galaxy. That's about it,” Johnson said. “We had a nice talk. We talked about my situation and the situation with the national team. We got to know each other in person because it is quite difficult over the phone. It was five or 10 minutes. It was quite short.

“He was just asking me what my best position is and where I feel most comfortable. I said I am playing on the wing. Sometimes it is hard to adjust in three days to a different role of playing and a different position. Sometimes it sounds easier than it is. I told him I feel more comfortable if I play the same position as I do for my club team with the national team.”

Nothing will be known for certain about how Arena plans to use Johnson—or any of his European-based players—until the crucial qualifier against Honduras on March 24. But there is a chance that the attack could feature Johnson and Borussia Dortmund teenage phenom Christian Pulisic on the wings.

“I think Christian is a very talented player,” Johnson said of his U.S. teammate. “I think he can help the team very much. I think sometimes it is harder because too many people are expecting too much from an 18-year-old. I think we should just let him play and let him improve. He's getting better and better every time he's on the field.”

The big question now: Will the U.S. national team get better and better every time it takes the field? At this point, Johnson doesn’t care how the team plays so long as it wins—which he predicts will happen.

“I think we are still very positive,” he concluded. “It's important to win the home games. There are still eight games to go. We still have it all in our hands. We just have to get the job done.”