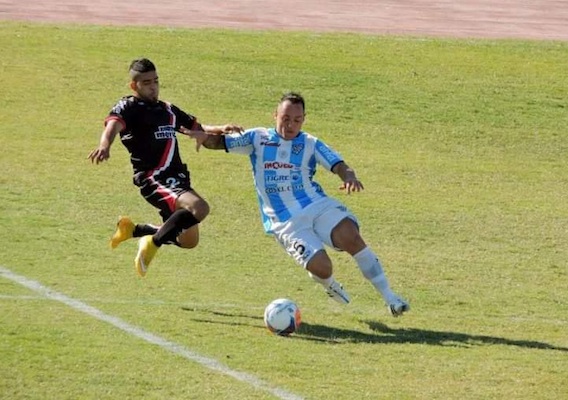 A 21-year-old Brooklyn native is taking an unconventional career path that he hopes will lead him to European soccer success and perhaps a shot with the United States Olympic team.
BY Brian Sciaretta Posted
May 06, 2015
11:00 AM

DOZENS OF AMERICAN SOCCER PLAYERS have found success in Mexico and Europe. Few, however, have accomplished much in South America. Occasionally a Yank will head down to one of its leagues but it rarely amounts to anything more than a brief stop or a novelty.

Fabian Bastidas intends to change all of that with Club Atlético River Plate in Uruguay. Not to be confused with the more famous club with the same name in Argentina, River Plate in Montevideo is currently in third place in Uruguay’s Primera Division—just three points off the lead.

Bastidas, 21, was born in Brooklyn to Colombian parents. When he was a young child he moved to Cali, Colombia, for a few years but the family soon returned to the United States and settled in Hollywood, Fla.

In South Florida Bastidas blossomed as an amateur athlete. Playing for Hollywood Hills High School, he was the best soccer player in a district known for producing serious talent. In his junior year he scored a record 28 goals. At the same time he was also a dominant club player in the area—first for the Hollywood Wildcats and later with East Broward United (which later changed its name to South Florida Elite).

It was at South Florida Elite where he earned his first break when a coach at the club had family ties to Uruguay. When Bastidas was 15, he trained for consecutive summers with the top Uruguayan club Danubio and once during that time he trained at West Ham in England. According to Bastidas, there was interest from both clubs but he was unable to sign since he was still a foreign minor and was not living with his parents. (FIFA rules prevent such signings.)

But Bastidas enjoyed his time with Danubio and wanted to stay in the country to begin his career.

“Never in my life would I have thought I would have ended up in Uruguay,” Bastidas told American Soccer Now from Montevideo. “Especially since my family is Colombian. I didn’t even know this country. It was really hard for me to adapt here because it’s a very rough league. I had to adapt because I had no other choice.

"But it is a very good league.”

Once he turned 18, Bastidas was able to play competitively in Uruguay. He wanted to begin at a small club where he could play and signed for Club Atlético Bella Vista. After 18 months at Bella Vista, the club was hit with a financial crisis and the first team was dissolved.

In 2013 he joined River plate where he emerged as an attacking prospect for the team. Naturally a forward, he was converted to a winger. He is quick but not explosively fast and the right-footed player has developed an ability to be equally strong with his left.

Bastidas began to make an impact during the 2014 Apertura but his break came this past spring during the 2015 Clausura. MLS played a key role when the Vancouver Whitecaps signed Cristian Techera from River Plate on a season-long loan. With Techera gone, Bastidas was asked to step in and fill that role on the team.

As Bastidas put it: “I think my chance has come. Now I have the chance to show myself.”

Techera has known Bastidas for more than a year and believes that he will do well for River Plate now that he has more responsibility.

"Technically he plays well,” the Whitecaps attacker said. “He's had only a few games with River but overall he’s been good. I'll think he'll get the playing time. When I left River I played with him and he'll play further up on the right. He has improved. He still has a ways to go to get his confidence up."

On April 26, Bastidas scored the opening goal in River’s 3-1 win over Tacuarembó.

While Bastidas is now starting for one of the better clubs in Uruguay, his long-term aspirations are similar to most of the players in the league:  He wants to eventually move to a bigger league, preferably in Europe.

Everyone is familiar with the outstanding tradition of Uruguay’s national team and the country has produced some of the world’s best players over the past decade—including Luis Suarez, Edinson Cavani, and Diego Forlan. The league, however, is a different story. While just about every great Uruguayan player began at youth academies in the domestic league, the teams are usually eager to sell—even by South American standards.

Supporting a domestic league in a small country—3.3 million people—is tough despite the fact that the country produces remarkable talent in relation to its size. The Montevideo metropolitan area accounts for nearly two-thirds of the country's population, and 13 of the 16 teams in the Primera Division are located in the Montevideo area.

The two most famous teams in the country, Nacional and Peñarol, enjoy a fierce rivalry that rivals any in professional soccer. The rest of the teams in the league, however, are much smaller. River Plate has been in existence since 1932 but has never won the title.

For Bastidas, staring his career in Uruguay represents an opportunity to play in front of European scouts while on a team that is willing to sell.

“For River Plate, 5,000 would be a huge crowd,” Bastidas explained. “But the league is very good. A lot of European team come here to get players because there are very good players and they buy them for cheap. Teams here don’t win the Libertadores. Why? Because there is not a lot of money. If you have a good player here and he does well and scores? Less than six months later, he’s gone and the team has to start all over again and get a new player.

"The league, though, is very good and very competitive – every game is very hard and very rough.”

“I want to leave here as soon as I get noticed,” Bastidas continued. “With River right now, we’re in third place. We can still be champions and go to Libertadores. That would be the first time River has played in the Libertadores and it would be an honor for the club. I’m thinking about that right now and that’s my goal.

"If I can do that, afterward I want to see if I can leave. Europe is where I want to go.”

Bastidas realizes that few American fans have heard of him. Among local press and even fellow players, he often goes out of his way to remind people he is an American.

“Everybody here in Uruguay calls me Colombian,” Bastidas said. “My nickname is El Colombiano. But the funny thing is that I am not Colombian. I’m American. It’s an honor to be the only American in this league and to possibly make something happen here with River and leave my mark as an American.

He watches the U.S. national team whenever he can and aspires to represent the United States on the international level.

"It’s one of my dreams to play for the U.S. national team or Olympic team.”