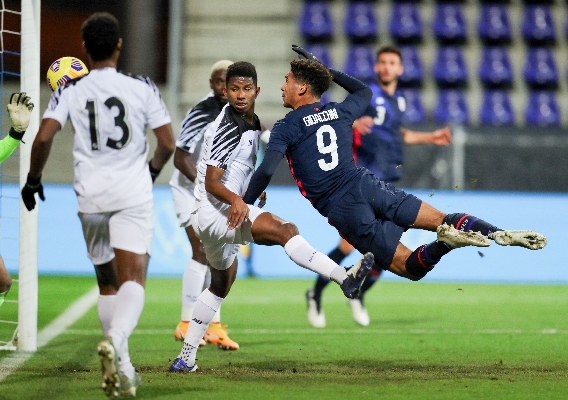 Evaluating the Gioacchini, Soto, & the USMNT strikers vs Panama

The United States national team leaves the November camp with a better understanding of the forward position - and that is a huge benefit for Gregg Berhalter heading into 2021. ASN's Justin Sousa takes an in-depth look at the two forwards who made strong cases against Panama: Nicholas Gioacchini and Sebastian Soto.
BY Justin Sousa Posted
November 17, 2020
12:50 PM

LAST WEEK, Sebastian Lletget got slammed by USMNT fans for being thrown into the team’s lineup against Wales as a false nine. Gregg Berhalter said the plan was to have Lletget there to help the United States focus on retaining possession rather than looking for the direct route, and that concept was evident despite the match ending in goalless draw. While the frustrations were understandable, Lletget did well to facilitate possession and lead the team’s press as he was supposed to.

On Monday, Nicholas Gioacchini and Sebastian Soto helped the team in those facets of their system and scored goals. There were subtle differences in the way they created space for themselves in and around the box, but they both showed a natural understanding of where and when to be to get on the end of a pass or loose ball.

As the breadth of options at the striker position continues to grow for the U.S., young players are going to have to continue making the most of these opportunities if they are to lockdown a long-term role with the national team. Gioacchini and Soto did just that against Panama, and these are some the positive traits they showcased that Berhalter can use to mold them into well-round, goal-scoring machines.

Getting showed that he has the skill set to provide the ball security and press leadership that Lletget offered against Wales while also stretching the opposition’s defense.

The best instances of his ability to drop in and link with his teammates came in the first half when the U.S. dominated possession. Although a carousel of players rotated through that void behind Gioacchini, he recognized the opportunities where he could fill that spot when other players had taken up deeper or wider positions.

Within the opening seconds of the match, Gioacchini exhibits his understanding of how to use that space most effectively. He recognizes McKennie drops off to provide Dest with a lateral then backward passing option and fills that pocket of space so that the team can continue progressing the ball forward. After a nifty one-two sequence with Dest, Gioacchini wins the foul to give the U.S. a promising set piece opportunity.

His understanding of how to work with the inverted wingers also showed in the way he would peel away towards goal to open space for them to cut into. Gio Reyna found a foothold in the match playing in behind Gioacchini or making movements into the middle of the field to link with teammates in front of goal.

As the ball is worked up the left side, Gioacchini begins to drift towards the right side of the field to move the defenders away from the space Reyna wants to run into. After Reyna cuts inside, Gioacchini immediately runs behind Panama’s right back to give a passing option heading directly towards the goal.

His movement in the build-up to his first goal also saw him make that run behind the left back as Reyna received the ball in the left half-space. Though the initial combination fails, the U.S. does a good job to win the ball back before Panama can break their high press. Gioacchini is alive to the play the entire time quickly running back onside, taking up a position between Panama’s disjointed center backs and stopping his run at the six to finish the rebound.

Nicholas Gioacchini turns it around for the @USMNT vs Panama ???? pic.twitter.com/AdaPvPFwdd

His second goal, though predominantly a product of a good build-up play and determination from his teammates, also emphasized that striker’s instinct within his game. To beat the cliché even further, he simply wanted the ball more than his defenders and put his body on the line to make sure he put it in the back of the net. That’s what you need form a goal scorer.

Nicholas Gioacchini grabs his second and the @USMNT’s third pic.twitter.com/pMFuoXe3jI

“He showed good penalty box movement,” Berhalter said after the game. “In the buildup, he could be more direct in dropping down and giving us some help, but he stretched the line a couple times. He gave us what I think we were missing a little bit in Wales.”

And Gioacchini looked bright in the plays where he did drop deeper. In the play below, Gioacchini looks to his left and sees Llanez has plenty of space to run onto a ball if he can get the service. The 20-year-old then shows for Tyler Adams to play a pass between the lines, turns and hits the over-the-top pass for Llanez to chase after.

A surprising statistic from this game was that Gioacchini was the tied-most fouled player in the game with both him and Yunus Musah being on the receiving end of four fouls. These fouls were often drawn from when he dropped into the midfield to provide a passing option..

Aside from the missed penalty, Gioacchini left a good impression on what he can provide the USMNT as a striker going forward. If Berhalter is set on wanting a striker who can finish his opportunities and provide an extra body in midfield to help in the build-up play, Gioacchini is one of the few strikers in the player pool capable of providing both right now.

Two goals in about 15 minutes is nothing to scoff at even with the opposition considered. Soto came onto the field with a determined demeanor, and the nonchalant celebrations following both his goals emphasized the self-belief he has in his ability to consistently finish when he is provided with good service.

Soto provided the USMNT with an extra bit of bite up top to close out the match, and his movement was just as lethal as Gioacchini’s in the box. His first goal, for example, showed a different approach to getting on the end of a cross than Gioacchini would have made had he still been on the field.

Sebastian Soto has scored on his international debut for the USA, great header from a lad who knows where the back of the net is???? #ncfc pic.twitter.com/CpiYNbl6fs

Soto has a bit more of this target-man presence about him in the way he can finish opportunities in the air as well as on the ground. Rather than making a run at the near or far post, Soto drops off his defenders as they near the six-yard box. In doing this, he gives himself the space to in between the center backs without a mark on him and get on the end of Richard Ledezma’s cross.

His 15-minute cameo did not provide much insight into his ability to be that link between the midfield and front line, but it did show the aggressiveness with which Soto plays. Although he does not win the ball back in this play, he slows down Panama’s momentum and forces them into playing the ball bakcward.

Soto’s second goal to tie up the 6-2 victory over Panama was the most telling of the threat he provides the U.S. when the ball is put into the box. Again, the goal comes from a header, but he does not get on the end of the ball without a defender on him if not for his subtle movement. He starts the play slightly off the defender’s back, then drifts further and further away from him until the cross is whipped in. The timing of his run and the header itself are perfectly executed.

He's the first @USMNT player to score twice as a substitute since @cpulisic_10 in 2016. pic.twitter.com/nfkjAX3gHD

While there was significantly less to analyze from Soto’s game time at this USMNT camp, the takeaways from what he offers as the nine were evident. His movement in the box, like Gioacchini, is exceptional and he adds a physically strong presence to compete for crosses and loose balls as well. The jury’s still out on how well he plays into the build-up like Berhalter wants from his striker, but this won’t be the last time Soto gets time with the USMNT.