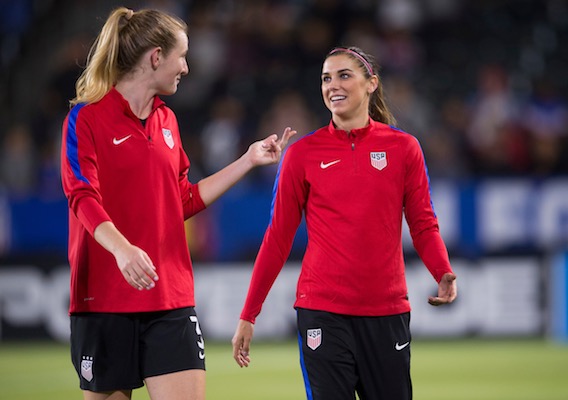 Low wages tend to be a hardship for many athletes in the NWSL, but this quartet brought an entrepreneurial spirit to their passion for soccer, and the results are very encouraging.
BY John D. Halloran Posted
January 09, 2017
8:10 AM

IT'S NO SECRET that athletes in the National Women’s Soccer League play for the love of the game. After all, the vast majority have degrees from some of the biggest and most well-known universities in the United States and, instead of embarking on more traditional careers, they have chosen the far less certain path of becoming professional soccer players.

Life for NWSL players also requires athletes to get creative in how they spend their downtime. The season only lasts for six months and the pay—between $7,200 and $39,700 for non-national team players in 2016—doesn’t provide a livable wage for most.

In their spare time, many players coach or run clinics and camps, while others take second jobs. Some spend their winter months abroad, plying their craft on loan stints in Europe or Asia.

However, a few have begun to take an even less traditional route and are trying their hand as entrepreneurs.

Yael Averbuch, a 30-year-old veteran midfielder who has played professionally in Sweden, Russia, and Cyprus as well as domestically in both the WPS and NWSL, is one such innovator. She recently launched a training app called Techne Futbol.

“In October, I launched the first version of the Techne app which provides a weekly technical session to subscribers,” Averbuch told American Soccer Now. “It’s been going awesome and I'm really excited about it. Obviously, there's a lot of room to grow. It's definitely the first version of a long-term business vision I have.”

2016 by the numbers since we officially launched our app on Oct. 2: https://t.co/G0NnX9GMfR pic.twitter.com/Jjg9Mln3Rq

As a child growing up in the 1990s, Averbuch’s father provided her with VHS tapes of technical sessions. Years later, as a professional, Averbuch began creating training videos of her own that she shared on YouTube. Through that experience, the New Jersey native began connecting with users on Twitter and Instagram which, in part, helped spur the idea for Techne.

While the app is a subscription service, Averbuch has also taken steps to provide access to those who might not be able to afford it by allowing other people in the soccer community to donate scholarships to users.

“I don't want anybody to be excluded based on cost. I'm sure everyone's aware that soccer in our country right now is mainly an upper middle-class community sport,” explained Averbuch. “Anybody who's dedicated to training and who will do the training, I want this app to be available to them to use.”

Another group of players who have recently gone the entrepreneurial route are Samantha Mewis, Kristie Mewis, and Stephanie McCaffrey. The three Massachusetts natives became friends in college with McCaffrey and Kristie Mewis playing as teammates at Boston College and McCaffrey and Sam Mewis becoming close through their experiences with the U.S. U-20 national team.

Now, all three are professional players in the NWSL and this off-season they came up with the idea to start their own website, Sporting Chic. The site is focused on women’s sports, fitness, nutrition, fashion, pop culture, and humor.

McCaffrey explained to American Soccer Now how the trio came up with the idea.

“One of the things [the three of us] have in common is that we’re very ambitious and we like to maximize our time,” said McCaffrey. “We thought, ‘You get to a point where you train four or five hours a day and after that, you physically can’t do any more before it becomes counterproductive. So, how can we apply those other eight hours in a day into something we are also passionate about outside of soccer?”

The site had 100,000 page views in December, but McCaffrey explained that there’s still plenty of room to grow. She thinks that most of their current audience is soccer fans, but they are aiming to build a community for fans of all women’s professional leagues.

Growing up in Massachusetts, McCaffrey has been a lifelong fan of the New England Patriots, Boston Bruins, Boston Celtics, and the New England Revolution, but paid little attention to women’s teams in the area. It’s something she stated Sporting Chic is aiming to change.

“What we want to do is build a community around women’s sports,” said McCaffrey. “Our goal is to make individual fans of women’s sports fans of their city’s teams in general and try to build that camaraderie."

For Averbuch, a desire to look at her future beyond the game helped motivate her to start Techne Futbol. And while she insisted she isn’t anywhere near done with her playing career, she wanted more freedom in deciding which clubs she represents and sees a career managing her app and business once she’s done with soccer.

“I don't want to make a decision about where I'm playing based on a financial situation,” she explained. “I want to play for the clubs that I feel are the best for me and a club that I want to represent.

“I need to, on my own, somehow generate enough financial security to be able to feel free to play where I want to play. That's been huge for me mentally and it's a work in progress, don't get me wrong. This is the business and career path that I would like to continue long after I'm finished with my on-field career.”

McCaffrey and the women behind Sporting Chic aren’t currently using their site’s revenue as an income source, but like Averbuch, they see their business as something that could help them when their playing careers are finished.

“The three of us are very, very fortunate that our endorsements are able to carry us through the off-season [right now]. I know that’s not the case with girls that are just as good as us in the league,” explained McCaffrey.

“Hopefully, [the website] will get big enough where we can grow it step-by-step in small increments, so when we are done playing soccer, we can put 100% of our energy into it and maybe make a little bit of money and be able to support ourselves.”

Despite approaching its fifth season, recent events have caused some fans to worry about the future of the NWSL. A few weeks ago, American superstar Alex Morgan announced her intention to head abroad to play for Lyon in France’s Feminine Division 1. Shortly thereafter, Crystal Dunn announced her signing with Chelsea and two of this year’s top college players, Hermann Trophy winner Kadeisha Buchanan and Ashley Lawrence are skipping the NWSL draft and heading to Europe as well.

However, neither Averbuch nor McCaffrey see these moves as troubling.

“Ideally, we want to be the place where all the best players in the world want to play, but I think it's positive that we have an exchange with other countries where we are preparing players to be ready to go contribute overseas and vice-versa,” said Averbuch.

“Our league is in a really good place. To be entering the fifth season, it's huge. We don't talk enough about the positive things. We made history last year in the fourth season of a women's pro league. Now, to be in a fifth season, that's awesome. There's talk of expansion teams coming in the upcoming years and this is all really, really positive. That being said, we're all very aware that it still needs to be better in a lot of ways. Nobody is blind to that.”

“Attendance is growing every year. Teams are getting more competitive. The games are more competitive and the rosters within individual teams—it’s getting harder and harder to earn your spot in the starting XI,” added McCaffrey.

“Everyone at our level does what they feel they have to to take their game to the next level and I completely respect anyone who feels they have to go to a different place for a new challenge. I don’t think as a player in the NWSL it takes away [from us], or makes me scared we’re not going to do as well.”

Both Averbuch and McCaffrey admit that life in the NWSL can be difficult for some, especially considering the financial realities of the league and the temptation of some players to take a more traditional career route. Still, neither player had any doubt about their personal path.

“I don’t think, for any of the three [at Sporting Chic], there was anything else we wanted to do. Obviously, I have my finance degree in my back pocket, but I believe personally that you’re going to be most successful in the thing you’re most passionate about,” said McCaffrey.

“I don’t think it’s even close in terms of what we wanted to do.”

“When you've dedicated your whole life to [soccer], I think a lot of people feel that they're not ready to give up on it,” said Averbuch. “It's not so much a financial or career decision, it's a decision based on continuing to do what you love. Obviously, if you're making a purely career decision, financially, it doesn't make sense.”

Averbuch is also taking steps to leave women’s professional soccer in a better place for future generations of players. She recently announced her intention to form a players’ association to give athletes a more uniform and consistent voice in communicating with the league, as well as promote the positives of the league.

“A players' association will allow us to have better communication and a unified voice as non-national team players and I think that's very important in terms of eventually building toward a  players' union,” said Averbuch.

“Right now, if we want to as players, we can make an individual statement, but a players' association will allow us to make a statement on behalf of the players in the league and have some formality in how we deal with issues and how we communicate.”

The women behind both ventures also have an overwhelmingly positive view of the future of the NWSL and women’s sports in the United States. While Averbuch is working to help players improve the technical side of their games, the women behind Sporting Chic are attempting to bring the entire world of women’s sports closer together.

“You really have to be passionate about it and love what you do to make this career work,” said Averbuch. “Eventually, a couple generations down the line, it will be a very different picture.”