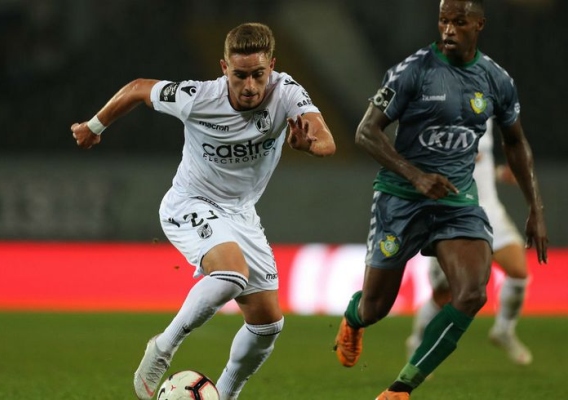 Not well known in American soccer circles, dual national Tyler Boyd spent the first decade of his life growing up in California before moving to New Zealand. Now he aims to continue his success in Portugal.
BY Brian Sciaretta Posted
December 16, 2018
11:00 PM
AS AMERICANS have moved abroad in greater number in recent years, Portugal has proven to be a tough place to play. Thus far, only a few Americans have ever found success in the Portuguese top flight. Tyler Boyd is hoping to buck the trend as the New Zealand-born, California-raised winger holds ambitious goals at Vitória de Guimarães.

Boyd’s background is certainly unique as far as Americans go - as it is rare to find players who hold dual nationality with New Zealand and the United States. With an American mother and a father from New Zealand, Boyd’s parents met in California and when his mother found out she was pregnant, his father requested that the baby be born in New Zealand. Once the young Boyd was old enough, however, his family returned to the United States where he was raised in Santa Ynez, about 40 miles north of Santa Barbara.

In California, Boyd began to develop as a soccer player and attended LA Galaxy games as a kid. At age 10 he returned to New Zealand and continued this development in the rugby-mad country. As a teenager, he signed his first professional deal with the Wellington Phoenix, the lone A-league team based in New Zealand.

After three years with Wellington, Boyd transferred to Portugal with Vitória de Guimarães but found his breakout last year on loan with Tondela, also of Portugal’s top flight. It was there that the speedy winger notched five goals and four assists during his first season as a top-flight starter. He also credit’s the development in Portugal to helping him become a well-rounded winger – most notably with his defense.

“I've been working my way up the ranks and I've been learning different styles from the various different coaches I've had here,” Boyd told ASN. “Basically I chose Portugal because it is a very complete league in terms of it being technical. Tactically it's very strong as well - as well the intensity, the speed, and the flair of the game. I chose it because it was a big step up from the Australian league. My dream as a kid was to play in Europe and it was the next step. I've improved so much over the three years I've been here because my mindset has been all about constant improvement. Still to this day, I am improving.”

“My goal is to play Champions League one day,” he added. “Still has that as an objective. I want to go to the highest leagues in the world. But Guimarães is a great club with some of the best supporters in Portugal. I am happy where I’m at.”

In the current season, Boyd returned to Vitória de Guimarães where he began the season as a starter. Unfortunately, he picked up an injury when a rough tackle resulted in a hematoma in his leg. Recently he returned to training and hopes to break back into the team in the coming weeks.

Earlier in December, Vitória de Guimarães hosted a banquet and Boyd was given the Revelation Award as the club’s best young player in 2018 by virtue of his performances at Tondela where he showcased his speed and technical ability with both feet. His former teammate at Wellington, American defensive midfielder Alex Smith, is not surprised that Boyd’s career has taken off in Portugal.

“Boydy came to us as a 17/18 year old,” Smith said. “He was part of a group of young academy players but he stood out strait away to all the older lads. He had a maturity for his age and was very talented. It took a bit of time to translate that into the games but once he did, he never looked back. He’s obviously shown his quality by staying in Europe when so many others come back to Australia or New Zealand after six months.”

While he moved away from the United States when he was 10, he is still very much in touch with his American side of the family. He keeps an eye on the United States national team and follows players he knows in MLS like Michael Boxall at Minnesota or his good friend Bill Tuiloma who is at Portland.

Every offseason he splits equally between California and New Zealand and notices the contrast between the two countries. Both have traditionally been dominated by other sports but he believes soccer is separating itself from the pack in the United States, particularly among the younger generations.

“America is absolutely thriving right now in terms of crowds,” Boyd explained. “The league is getting pumped up and world-wide it is getting more noticed. They have great facilities and great conditions to play. I love what they've done over there to make it a bigger league. In New Zealand we have one A-league team that is professional and the domestic league is sort-of semi-pro. Most of the top talent in New Zealand head off to Europe or to other countries.”

As for his international future, Boyd knows that success in Portugal could possibly present himself with a choice as he holds valid passports to two nations. He has played internationally for New Zealand at the youth level as well as for its senior team in friendlies. He is quick to point out that he is not cap-tied to New Zealand and that the door could be open to the United States, a country he feels equally loyal.

“It's tricky. It's kind of like choosing between your mother and your father, which is impossible” Boyd said with a chuckle. “I actually have spent 10 years in each country before moving to Portugal. Every offseason I go back to America for at least two weeks. I still have a lot of friends and family over there and I love it. I spend half my offseason in New Zealand and half in America. I have a parent from each country and I feel loyalty to each country. I'd be proud to represent either. At this stage I've only played non-competitive games for New Zealand. It's still a possibility for either nation. The U.S. team is looking to rebuild and qualify - that is an interesting process. The same goes to New Zealand.”