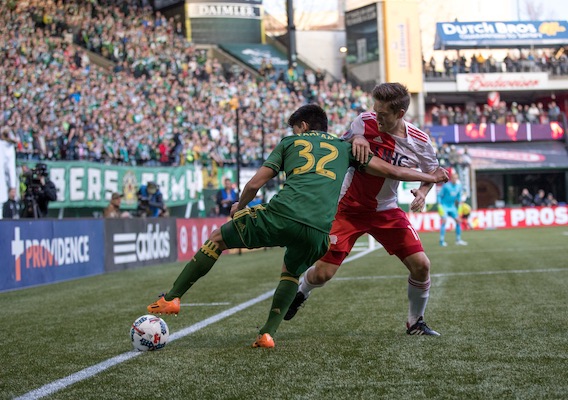 The 18-year-old left back got a chance to show what he could do for the Portland Timbers and impressed his coach and many observers. ASN's Brian Sciaretta spoke with the U.S. U-20 hopeful.
BY Brian Sciaretta Posted
May 05, 2017
7:30 AM

AFTER A DISAPPOINTING 2016 CAMPAIGN the Portland Timbers appear to be back to their winning ways. Portland has filled the net 20 times so far—best in the league—and the club is playing attractive soccer. Equally impressive: The Pacific Northwest team is succeeding with an eye toward the future.

Marco Farfan, 18, is still in high school but this year he became the Timbers' first homegrown academy player to play in MLS when he filled in for first-choice left back Vytautas Andriuskevicius. In those four games, the Timbers went 2-1-1 and conceded just three goals.

“It means a lot,” Farfan told American Soccer Now from Portland. “I wasn't expecting to be the first homegrown coming from the academy because there is a lot of talent in that academy. There are a lot of really good players there who dream of being professional players. It just shows the talent and the depth that the Timbers academy has and how the coaches manage to develop these players.

"It's been really fun. The transition wasn't much different from the transition from academy to T2—especially because the guys in the locker room really took me in and made me feel a part of them. That made it very comfortable.”

Andriuskevicius has returned from his injury and over the past few weeks Farfan has been moving back and forth between the first-team bench and the Portland Timbers II team in USL—where he was a standout in 2016. In that sense, he embodies the USL-MLS partnership that seeks to help younger players like Farfan earn meaningful minutes.

Timbers head coach Caleb Porter is optimistic that Farfan will be a big part of the team’s future, even if he is not a regular starter at the moment. Porter cited many factors as to why the club is bullish on Farfan’s future but he noted that he is strong defensively, in possession, and in the attack—partly due to the fact he is a converted winger.

“The things we like the most about him is just how complete he is,” Porter said. “He's deceptively athletic. He's got pace. He's stronger than you think. You can't teach that. For him to have the althleticism is a great starting point for an outside defender. But the combination of the athleticism and the technical ability is what drew us to him. He has kind of the rare combination.

“I think we're very pleased with how quickly he's transitioned to first-team football,” Porter added. “We obviously knew we had a gem and that's why we signed him. I'm a big believer in only signing young players that we really think are going to play. For me, you have to be ready. It has to be the right player that is going to be good enough. He's the first one. We signed him because we felt that he was good enough and he had the qualities we were looking for. We were going to put him in that No. 2 spot in the depth chart knowing that he would get some games. I think in the four games he played, he did extremely well. You hardly knew he was 18.”

Farfan's parents are both from Mexico but he was born and raised in Portland. In his family, soccer was a way of life. They all regularly watched Liga MX games and he and his family were all supporters of Pumas UNAM. His older brother played for Timbers youth teams, prompting Marco to become a big supporter of his hometown club.

While his allegiance is settled at the club level, he is still undecided on the international stage. As a dual-national, Farfan is eligible to represent both the United States and Mexico. Last October, he made his debut for the United States at the U-19 level for a camp in Europe. He enjoyed that experience, adding that following his strong wave of MLS performances, the U-20 World Cup is a current goal.

At this point it is unclear where Farfan stands with Tab Ramos and if he emerged too late in the cycle. Porter hopes that Farfan makes the U.S. U-20 World Cup team and believes the experience would be good for the team’s prized youngster. While Farfan has not played for the U-20 team yet, Porter pointed out that Farfan was called up by Ramos for the recent U-20 camp in London but Portland could not release him since he was playing with the first team at that time.

And while Farfan is hoping to book a late ticket to South Korea this month, he also says his mind is not entirely made up should Mexico show interest.

“I got my first call-up to the U-19s last October, I know what things are like with the youth national teams right now,” Farfan said. “The U-20s have been my goal for this cycle, I hope to get called up. If the opportunity comes right now with Mexico for the youth national teams, I'd probably take it to see what it's like and see the differences between the U.S. and Mexico.”

No matter what path he chooses for himself internationally, Farfan is likely to be a presence in MLS in the years ahead. Quality left backs are a rarity in American soccer. Portland helped produce current national team left back Jorge Villafana, who Farfan lists as one of his idols. Now the club has a chance to produce another.

“The most important think is the mentality," Porter said. "Long term, it's what's between the ears of a young player that's the key—the consistency, the ability to keep learning, his ability to cope with pressure. The honeymoon where he's just an 18-year-old kid is quick. People soon don't care about that. Now he's got to perform. He's not nervous or in awe. You either have a good head or you don't.

"He's got a great head on his shoulders.”