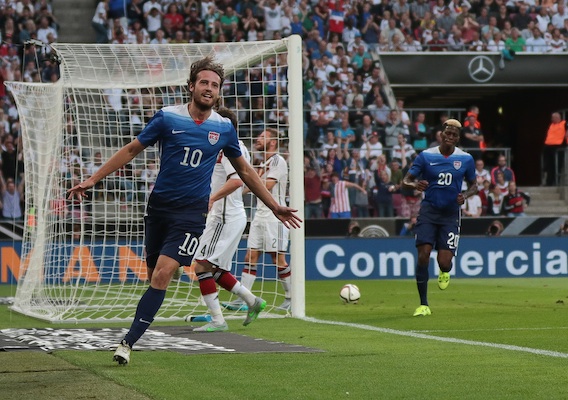 JUST A FEW DAYS after a stunning 4-3 win over the Dutch in Amsterdam, few would have expected the U.S. to go get a win against an even better European superpower. But the Yanks had other ideas, outplaying world No. 1 Germany’s B+ team for much of the night on their way to a famous 2-1 win.

Following a slow start, the Yanks kicked into gear in the latter stages of the first half, with Mix Diskerud scoring a superb equalizer to cancel out Mario Gotze’s opener, before Bobby Wood—Bobby Wood!—belted in a late winner to grab all three points for the fully deserving Americans.

From the opening whistle, it looked like the U.S. was in for a repeat of last summer’s World Cup beat down at the hands of the world champions. The likes of Gotze, Mesut Ozil, and Andre Schurrle ran the show in the opening exchanges, and the early German pressure culminated in Gotze’s 12th-minute strike.

The American defense and midfield appeared to put on a sort of biblical reenactment on the goal, as they parted the proverbial Red Sea to allow Patrick Hermann to cruise through three players before passing to a wide open Gotze, who made no mistake with a cool side-footed finish.

The German pressure continued for about 15 more minutes before the U.S. gradually began to grab some control of the match. The teams traded blows throughout the rest of the half, with Gotze nearly adding a second in the 31st minute but for a fine save from Brad Guzan.

Ten minutes later, the U.S. equalized via an outstanding passing sequence, capped off by a clinical finish from Diskerud. After 29 passes and 90 seconds of possession, Michael Bradley played a trademark gorgeous chip onto the onrushing Diskerud’s chest. The NYCFC midfielder controlled Bradley’s pass beautifully before lashing a creative volley past German keeper Ron-Robert Zieler.

The goal led to a clear increase in confidence for the Americans, who engineered a chance for Gyasi Zardes as the half wound to a close—and which the Los Angeles Galaxy star fired over the bar. It was a sign of things to come, and the U.S. would pick up right where it left off on the other side of halftime.

The U.S. created all the chances in the first 20 minutes of the second interval, looking comfortably more likely to score. Second-half substitute Sami Khedira nearly killed the U.S. momentum with a 66th-minute header, but once his effort trickled wide, it was right back to U.S. pressure for the rest of the half.

In the 80th minute, Bradley tried an audacious Olimpico corner kick, and Zieler had to be sharp to claw it off his line. Minutes later, the U.S. put on a clinical counterattack, with center back Ventura Alvarado winning the ball before setting off a move that found Bradley in open space in the German half. Bradley’s through ball to DeAndre Yedlin left the Tottenham right back with plenty of space on the right side of the box, and Yedlin cut it back to the arriving Bradley. The U.S. captain hit a solid left-footed shot, but Zieler made a strong kick save to keep the game level.

It would not remain that way for long.

In the 86th minute, Brad Evans—who acquitted himself extremely well in his first U.S. appearance for a long time—whipped in a pass toward Morris. The Stanford man cleverly dummied the ball to leave it for Wood, who was left one-on-one against the last German defender. Wood continued his stunning redemption tour, turning brilliantly before belting a beautiful left-footed strike into the far corner for his second game winner in a week.

Khedira nearly ruined the fun with a looping header off the bar ifour minutes into stoppage time, but it wasn’t to be, and the Yanks claimed their second huge win of the road trip.

So what do you think, ASN community? Is the Klinsmann revolution complete? Was this week just a flash in the pan? Let us know in the Comments section.