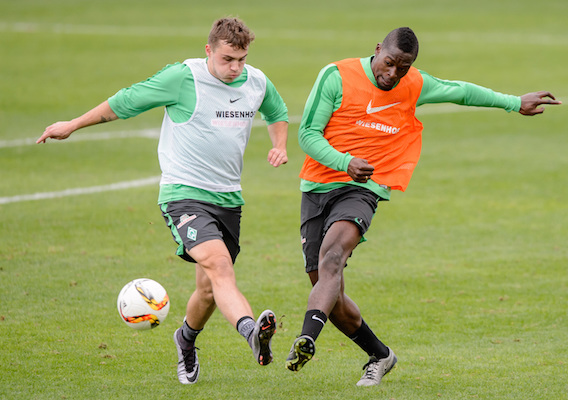 Dear Jordan Morris: Stay in Germany and Make It Work

The 21-year-old striker has an offer from Seattle but is currently training with Werder Bremen. According to Matt Hermann, Morris woud be a fantastic fit on the struggling Bundesliga side.
BY Matt Hermann Posted
January 16, 2016
10:00 AM

Maybe you’ve just been paying attention over the years. You’ve watched a string of America’s most promising talents maroon themselves on the the expensive upholstery of the top five league benches or kick and rush it in Denmark or Norway, places where the competition (and the wages) aren’t much better than in the U.S.

You have your reasons for wanting Jordan Morris to spurn Werder Bremen so he can come home and sign with the Sounders; the last one is even good. But this time, you’re wrong. Morris and Werder are a match made in heaven, and as long as he keeps on playing like he has been on his current training stint he should get games right away.

Mostly that’s because Bremen are a bad team, especially up front. The club is third from the bottom in the Bundesliga standings; it's the league’s second-lowest-scoring side; and it's the sixth-worst side at finishing its chances (which are the fourth fewest in the league). These are ominous numbers, but think about it: A bad team in a good league whose exact problem is one you can help solve is right where you want to be as a player making the leap to Europe.

Morris has shown he can produce at the college and international level, perhaps he’ll rise to the occasion in the Bundesliga too. (He served up a slick assist for Claudio Pizaro to volly home in a friendly in Turkey this week.)

Speaking of Pizarro, he’s another great reason for Morris to sign with Bremen. Not only because he’s an outrageously skilled player that any young striker could learn something from, but also because he’s 37 years old. The Peruvian, whose beard is taking on an increasingly salt-and-pepper cast, is principally a substitute and almost never goes 90 minutes anymore, meaning he wouldn’t stand in the way of Morris’ development.

At Werder, there’s only one striker who’s a nailed-on starter: Anthony Ujah. With seven goals, the Nigeria international is Werder’s top scorer by a mile (nobody else on the roster has more than two) and as long as he’s healthy, he plays. For what it’s worth, Ujah already seems to have taken a liking to Morris, answering a local paper’s question about the American with a succinct “we need fast players like him.”

Aside from Ujah and Pizarro, forward depth at Werder is wafer thin. Morris’ U.S. national team colleague Aron Johannsson’s recovery from a nerve injury looks like it may take a while yet, and his play in six league games prior to getting hurt was merely average. Bremen’s only other out-and-out striker, young local lad Melvyn Lorenzen, has yet to do much to prove he deserves more than the garbage time minutes he’s been getting. As long as Johannson is sidelined, Morris has a good shot at leapfrogging Lorenzen and seeing playing time right away. Hell, if Ujah gets hurt he might even start.

If putting an untested kid out on the pitch to face the likes of Bayern Munich and Borussia Dortmund sounds far-fetched, you don’t know Werder coach Viktor Skripnik. Previously the club’s youth team coach, Skripnik took over a flailing Werder first team in October 2014 and led it to midtable safety by trusting the homegrown youngsters he knew. This season Werder finds itself in trouble again, but this time it boasts one of the youngest squads in the league and seem determined to stick with them, come what may. The club is betting that as the season wears on, its core group of kids will mature and improve—and age-wise, Morris would fit right in with them.

In short, the Hermann Trophy winner isn’t going to get a better chance to play real minutes in a big-time league than he’s likely to find at Werder right now. His stock is high already, and a couple good years in a league few in Europe respect isn’t going to raise it much. The particulars surrounding striker depth at the club he’s trying out with are extremely favorable, and the coach he’s trying to impress has proven willing to give youth a chance.