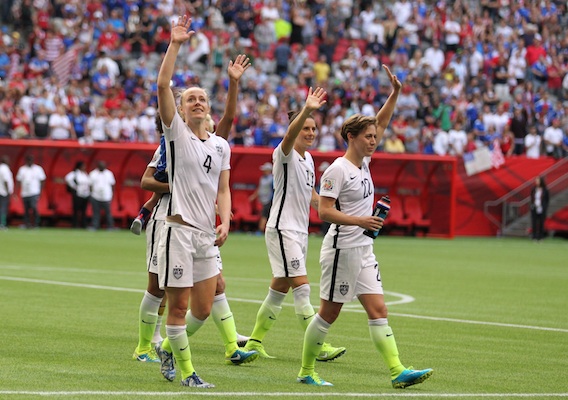 AHEAD OF THE UNITED STATES women’s national team knockout round matchup with Colombia on Monday, pundits everywhere have tried every which way to account for the U.S.’ recent defensive excellence, as well as the team’s offensive failings. And a lot of that is natural, as soccer is a game that lends itself to all sorts of subjective analysis.

But what happens when all of the tactical breakdowns, player bias, and analysis are stripped away and all that is left are the cold, hard numbers?

For many, the United States' failure to secure “beautiful” wins in recent months lies directly with head coach Jill Ellis. And many of those same fans seem to believe that the team would be better off if it has not fired previous coach Tom Sermanni. But the numbers reveal that the two coaches have nearly identical records.

One bright spot for Ellis of late has been the American defense, which has secured 11 shutouts in the team’s last 15 games. And a closer look at the statistics reveals two important reasons behind that success—the inclusion of Julie Johnston in the starting XI and Ellis finally settling on a consistent backline.

Johnston first became a regular starter in March’s Algarve Cup against Norway (her only previous start came in April 2013 under Sermanni). Ellis herself admits that she was “forced” to use Johnston at the time due to injuries at the time to Christie Rampone and Whitney Engen. But however it happened, it has worked.

In the 10 games that Johnston has started since March, the U.S. has picked up seven shutouts and only allowed three goals. And in the nine games since Ellis has settled on a back line of Meghan Klingenberg, Becky Sauerbrunn, Johnston, and Ali Krieger (with Hope Solo in goal), the U.S. has allowed just two goals in nine games—resulting in a remarkable 0.22 goals against average. Even more impressive is the fact that five of the seven teams the U.S. has shutout during that streak are ranked in FIFA’s top 20.

Decidedly less impressive, however, is the U.S.’ offensive production. The Americans have been shutout in five of the team’s last 13 games and, as ESPN’s Paul Carr pointed out last week, that level of offensive incompetence is unknown to the U.S. women in the modern era.

So what, or who, is causing this offensive malaise? Tactical analysis has its place, but can be incredibly difficult to quantify. So we decided to look at some statistics.

Looking at goals, assists, points (two points for a goal and one point for an assist), and minutes played, Abby Wambach is far and away the most impactful player during Ellis’ 29 games in charge.

And that narrative fits well with what most analysts said after the U.S.’s recent win over Nigeria—that while the U.S.’ tactics are still very direct, those tactics work much better when Wambach is on the pitch.

However, an interesting thing happens when the “cupcake” games—many of which take place against inferior CONCACAF competition—are eliminated. Of Ellis’ 29 games in charge since last April, the U.S. has played 16 games against teams that qualified for the knockout rounds of the 2015 World Cup. And looking only at those 16 games, a completely different picture emerges.

Using only the data from opponents of “knockout round” quality, Wambach drops from the most productive player (per minute played) on the squad to sixth while fellow strikers Alex Morgan, Amy Rodriguez, and Sydney Leroux all move ahead of her.

Also surprising is that Christen Press and Tobin Heath, both fan favorites and commonly accepted to be among the team’s most skilled players, are fairly low on both lists, regardless of the level of competition.

GETTING LLOYD ON TRACK

One final look at the numbers also reveals a possible reason behind the recent offensive struggles of Carli Lloyd. With 15 goals in the Ellis era and seven of those coming against top-level competition, Lloyd is clearly one of the top Americans in the game. But Lloyd has been in a funk lately, going scoreless in her last 10 games. For comparison’s sake, the last time Lloyd started a scoreless streak this long, one has to go all the way back to 2008.

So, why might Lloyd be struggling? Perhaps it’s because her legs are shot. In Ellis’ 29 games in charge, Lloyd has started 28 matches and gone the distance in 26. To put that into context, Lloyd has more minutes than goalkeeper Hope Solo and backup keeper Ashlyn Harris combined.

Of course, Lloyd has gone into funks before in major tournaments, only to come up big when the U.S. needed her most. In both the 2008 and 2012 Olympics, Lloyd’s only goals in the knockout rounds came in the tournament finals, when she scored the game-winning goal to lead the U.S. to the gold medal each time.