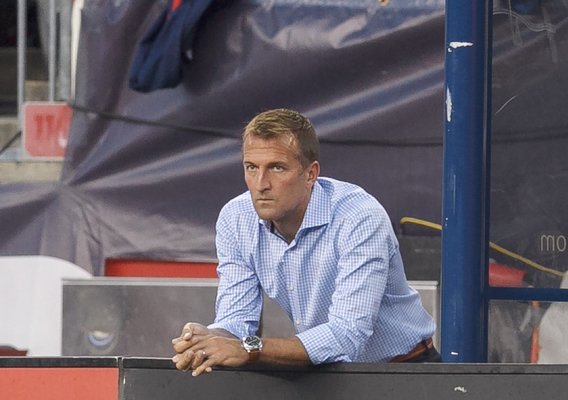 The first two weeks of September are going to be a very busy time for U.S. Soccer with four different national teams in action. ASN's Brian Sciaretta breaks down the U-20 and U-23 rosters which were released on Friday.
BY Brian Sciaretta Posted
August 30, 2019
4:55 PM
ON FRIDAY of Labor Day weekend, U.S. Soccer announced the upcoming rosters for a U-20 camp in Slovenia and a U-23 camp in Chula Vista, California. Combined, the rosters include many of the top American prospects in the game right now. With the U-17 and full national team also in action next week, it promises to be an eventful time.

The U-23 team, coached by Jason Kreis, is preparing for qualifying for the 2020 Tokyo Olympics in March and the team is seeking its first Olympic appearance since 2008. Their camp will run from September 1-10 in California and will feature a closed-door match with Japan on September 9.

Meanwhile the U-20 team is only just beginning its new cycle for the 2021 World Cup (where the host is yet to be decided). The team camp will take place in Slovenia and it will face Croatia on September 5 and then the United Arab Emirates U-23 team on September 9.

Here are the rosters and a few thoughts on them.


The last two U-23 teams were genuine disappointments. Jurgen Klinsmann stressed the importance of the teams and they came up short. This U-23 cycle is build off the last two U-20 teams – which each won CONCACAF – so expectations should be higher. The 1997-2000 birth years are overall better for American players when compared with CONCACAF.

The problem, of course, is that the U-23 team is essentially playing with players pretty far down the depth chart. If this team can qualify for the Olympics with players mostly from this roster, it will say something about the overall level of the American player increasing.

So this roster is the best Jason Kreis and U.S. Soccer could do without all those 24 players named in the paragraph above. So with that considered, this roster is pretty impressive because when you compare it with the rosters for Olympic qualifying in 2015 under Andi Herzog or in 2012 under Caleb Porter, it’s a step up in terms of difference makers.

That being said, help will surely be on the way. MLS clubs are sure to fall in line for Olympic qualifying and not deny releases for players. And unless an U-23 MLS-based player is starting for the national team or a key player off the bench, he will likely be part of the Olympic qualifying team. As for the abroad-based players, it all depends on clubs being willing to release players or if CONCACAF will allow for rosters to be augmented for the games in the international window.

Which brings us to this camp. The point is that these players are fighting for what could only be a limited number of roster spots. It is hard to know because this team has not even come close to establishing a core group. It’s only the third camp of the cycle and many players are in a three-way battle with U-23 team, the full national team, and clubs for their playing time.

Even with all the players missing, there are several players who have the opportunity at this camp not just to sneak into the backup positions, but also become a core player.

Here are a few:

Djordje Mihailovic: the only player on the roster to have been capped by the full national team. With that kind of experience, expectations should be higher on him not just to play well, but also to provide leadership.

Brandon Servania: the FC Dallas midfielder has been in fine form since the U-20 World Cup and this team needs more defensive midfielders who can also sneak forward and be part of goal-scoring opportunities.

Jesus Ferreira: Technically not eligible for to play in official games for the United States yet, Ferreira hopes to have that resolved soon. But he is having a nice season for FC Dallas and he can be a dynamic attacking option up front.

Alex Mendez: Fresh off the U-20 World Cup and a transfer to Ajax, Mendez has the ability to hit first-rate passes from central midfield while also being a threat to score from outside the box. He’s still young but is one of U.S. Soccer’s better midfield prospects.

Hassani Dotson: The Seattle native has been a revelation for Minnesota United this season and he can play in a wide variety of positions. He’s perfect player for a small roster at the youth level because he can provide cover at several positions. But is there an area where he can sneak into the starting lineup?

Mason Toye: The New Jersey native has quietly emerged into an important component of Minnesota's improvement in 2019. But now can he carry that success over to the U-23's? This team needs more established forwards and Toye has momentum?


Tab Ramos will start the 2021 cycle in Europe and this roster consists entirely of players born in 2001. As is the case every U-20 cycle, it changes dramatically throughout the cycle as some players breakthrough at their clubs while others stagnate. Plus, the players on the U-17 team are currently preparing for a World Cup in October and the best players from that team will get promoted to the U-20s starting in 2020.

In other words, this is just the first steps for a team that will change a lot over just the next six to nine months.

Ramos pushed to have Julian Araujo and Matko Miljevic for this camp but had their releases denied. Miljevic is sure to have been disappointing for Ramos as he is starting to get minutes in Argentina’s Primera with Argentinos Juniors and is also in the picture with Argentina’s U-20 team. Also, Ulysses Llanez was recently injured and unable to come.

This camp is still important for players and there is pressure to perform well given how quickly fortunes can change at this age. A sudden breakout for a player not at this camp can change the depth chart quickly.

At this camp, expectations are high for Celtic winger Cameron Harper who is a dynamic attacker. Johan Gomez and Charlie Kelman are also promising goal-scoring options. Tanner Tessmann and Thomas Roberts are FC Dallas products who can follow in the lines of Paxton Pomykal and Brandon Servania. Finally, David Ochoa has a huge opportunity to be one of the best U.S. U-20 goalkeepers since Zack Steffen in 2015.