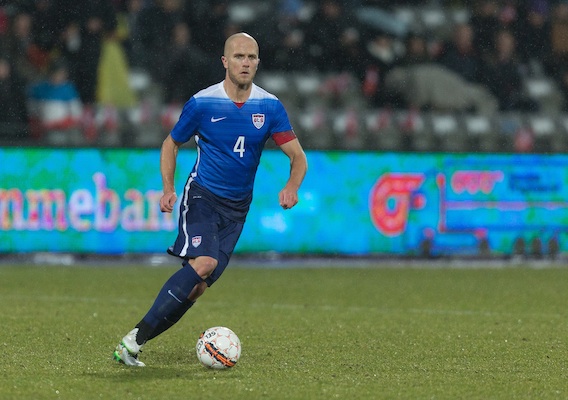 Bradley on U.S. Captaincy: "It's a Tremendous Honor"

The 27-year-old midfielder exudes passion and commitment on the soccer field, and on Wednesday he earned his first start as U.S. captain. ASN's Andrew Gastelum spoke to Bradley about the role.
BY Andrew Gastelum Posted
March 30, 2015
7:55 PM

ZURICH—Throughout his decorated international career, Michael Bradley has been called a lot of things: Bob’s son, Il Generale, MB90, Lex Luthor. But never had he been called upon as Captain America. That is, until Wednesday.

Last week against Denmark marked the first time Bradley wore the armband to start a match for the U.S. national team. In 81 starts, he had seen the captain’s armband tossed to him, gifted his way by a departing U.S. teammate and even sometimes temporarily adorned upon his arm.

It took start No. 82 to wear it out of the tunnel in all its pride and glory. The 27-year-old midfielder is expected to do so again Tuesday night as the U.S. national team faces 12th-ranked Switzerland in Zurich.

“It’s a tremendous honor,” Bradley said. “To captain the national team is really something special. To be able to lead the guys out as captain and have that experience is very special, and I won’t forget it anytime soon.”

A hamstring injury to Clint Dempsey sent the current U.S. captain back to Seattle for treatment last week, leaving Bradley as the obvious choice to lead the team. But Bradley said Jurgen Klinsmann waited until just hours before the match to tell him he’d get the chance to fulfill a lifelong dream.

“When you are given the captain’s armband it fills you up with a lot of pride and a little bit of happiness too,” Klinsmann said at his press conference Monday. “As a coach, you want a player who has had those types of opportunities to be your connection. You want them to be involved. You want to ask them all the time if everything is all right, is there anything we need to do differently to improve? You want them to speak up. The captain should be a second voice who knows what we’re trying to do, what’s the plan, and to help them implement that to success.”

Bradley said that his feeling of pride was palpable on Wednesday. Denmark coach Morten Olsen deemed him “marvelous.” But Bradley has never needed the captain’s armband to be a leader for the U.S. The Princeton, N.J., native is renowned for his intensity on the pitch as much for his composure off of it, but even he admitted to feeling more weight on his shoulders—or more specifically down the sleeve of his left arm.

“There’s a balance because you have to be yourself, you have to know who you are as a player, as a personality,” Bradley said. “But at the same time there is absolutely more pressure, not just to play well but more importantly to be a strong presence, to help the team win. There are a lot of factors that go into [being captain].”

Bradley is one of two players on the current U.S. roster remaining from the 2010 World Cup in South Africa, along with forward Jozy Altidore. The striker now lines up alongside Bradley at both a domestic and international level, but even Altidore said there was an discernable difference between Bradley as an MLS captain and the one he saw in Aarhus last week.

“Of course there was a difference,” Altidore said. “Playing for the national team is the highest honor you can have as a player. Every time you see the jersey hanging as you walk into the dressing room, it’s a blessing for all of us. For him, there’s no replicating that.”

Bradley will be the first to tell you Dempsey remains the standing U.S. captain and he is just doing the duty entrusted to him by Klinsmann, however temporary that may be. But to make his mark, the Toronto FC midfielder said he pulls from the leadership styles of everyone around him and those that came before him, from Dempsey to Donovan.

“Since I’ve been here there have been many leaders, big personalities and captains, so for me I just try to watch and learn from everybody,” Bradley said. “Guys I’ve played with, guys I’ve played against, top athletes in others sports, and see who are the real leaders, who are the real competitors, who are the ones that when the spotlight comes on they bring out the best in themselves and get their team ready to play. Just trying to do all of that here.”

No longer just Bob’s son, but with the same Lex Luthor look, Bradley was nicknamed “Il Generale” while at Cheivo Verona in Serie A back in 2011. But at least for the time being, “Il Capitano” seems to suit him best.