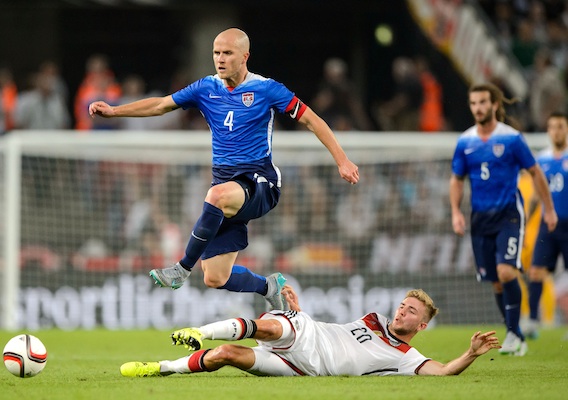 Brad, Bobby, and Bradley Lead the Way vs. Germany

Another European powerhouse. Another U.S. victory. And another batch of player ratings from Brooke Tunstall. Read his take on the individual performances and then create your own ratings.
BY Brooke Tunstall Posted
June 10, 2015
7:45 PM
WELL, THAT WAS A FUN little trip to Europe, wasn’t it?

The United States men's national team completed a remarkable two-game journey to the Old World with its second win over a Top 10 team in six days, rallying from a disastrous opening 30 minutes to defeat reigning World Cup champion Germany 2-1 in Cologne.

This win, the second for the U.S. over the Germans since the team's former boss took over the U.S. program in 2011, came on the heels of Friday’s similarly stunning 4-3 win over the Netherlands in Amsterdam.

Suddenly a U.S. side that was reeling as it stumbled through a 1-3-2 stretch last fall and winter heads into next month’s Gold Cup unbeaten in its last four games and oozing confidence. That’s bad news for the rest of CONCACAF, including fellow regional big dog Mexico, which the U.S. dispatched fairly handily 2-0 in April.

For the first part of the game against Germany the idea of taking momentum anywhere, let alone the Gold Cup, seemed laughable. The hosts showed their world champion class, dominating possession with ease and stretching the U.S. completely out of shape, leaving wide open players with too much time to find players who were even more open.

That the U.S. was only down one goal was a testament mostly to the play of Brad Guzan, who made a pair of stellar saves in the first half to bail out a defense that can only generously be described as shaky.

But somehow the U.S. found it’s sea legs and capped off a remarkable 90-second stretch of possession when talisman Michael Bradley found the mercurial Mix Diskerud and the New York City FC midfielder made amends for a defensive gaffe on the German goal to tie the game.

The U.S. actually had the better of play for much of the second half but seemed to be conceding a draw when Jurgen Klinsmann subbed on Jordan Morris and Bobby Wood. But the pairing that combined on the winning goal against the Dutch went to work again, with Morris dummying a superb ball by Brad Evans that drew the German defense out of position and gave Wood enough space to unleash a bomb from distance that curled in for the game-winner.

The U.S. had to scramble through the closing minutes and got a bit of luck when a last-gasp German shot hit the crossbar. But when the whistle blew one of the more remarkable weeks in U.S. Soccer history was complete.

It wasn’t just what Klinsmann’s men did, but combined with the women’s national team winning its World Cup opener against a game Australia side Monday, the U-23 men’s team taking third in the prestigious Toulon Tournament with a 2-1 win over England, and the U-20 men advancing to the quarterfinals of its World Cup early Wednesday morning, it’s been a great week for American national teams.

Maybe the soccer gods are paying us back for Loretta Lynch!

Brad Guzan—Two strong saves in the first half when the Germans were picking the U.S. apart gave the Americans a chance and that’s all you really want from your goalkeeper. Not much he could have done on the German goal and he’s pretty much ended any talk about who should start for the U.S. in the Gold Cup. Rating: 7.

Timothy Chandler—Caught woefully out of position on the German goal when he was far too slow to tuck in—leaving Mario Gotze, whose been known to score a big goal or two, wide open. Played better when he switched to left back in the second half but got caught out on the last German possession and he seems unable to shake a mental lapse or two per game from his repertoire. Rating: 4.5

Ventura Alvarado—Probably could have done better on the German goal but the defense was so out of shape by then that it’s hard to fault him too much. Otherwise, his strongest match in his brief time with the U.S. as he got better and more confident as the contest wore on. Rating: 5.5

John Brooks—Virtually a mistake-free performance by the German-American who once flirted playing for the other team. Had a couple of shaky passes but was strong in the air and in the tackle. More importantly, he eliminated the ball-watching trend that has cost him, and his team, in previous games. Rating: 6.5

Fabian Johnson—A strong 45 minutes at left back. Got forward well and could have had an assist and was confident defensively, raising questions about where he is best suited to play for the U.S. Rating: 6

Danny Williams—Unable to build on the momentum of his strong relief appearance in Holland, Williams spent most of his 45 minutes chasing German attackers, did little to help the U.S. maintain possession, and committed a silly foul that on another day could have been punished with more than a yellow. Rating: 4

Mix Diskerud—An up-and-down game, but the positives outweighed the negatives. He was beaten badly on the run that led to the first German goal, causing the U.S. defense to completely lose its shape. But he kept his head in the game, helped the U.S. get better in possession, and made a great run and even better finish to score the equalizer. Rating: 5.5

Michael Bradley—He has now become what Roberto Baggio was to the Italians in the 1990s: so goes Bradley, so goes the U.S. He was a touch off early in the game and the Americans struggled but he recalibrated his passing accuracy and the U.S. found another gear that enabled them to completely turn the game around. The caliber of his assist on Diskerud’s goal has become routine but not a lot of players in the world consistently make that pass. Rating: 8

Gyasi Zardes—A tale of two halves. Began the game as a wide midfielder but with the U.S. playing a diamond that saw the outside mids playing more compact, he was unable to use his pace and struggled to make an impact. He switched to his more familiar forward role in the second half and promptly provided possession help and added an element of danger. Rating: 5.5

Juan Agudelo—In his first start for the U.S. in four years, Agudelo showed little to warrant another one anytime soon as he struggled to make an impact. Granted, the U.S. midfield created little in the way of chances for him but he failed to adjust and find a way to help. Rating: 4

Aron Johannsson—Some flashes of skill that on another day would have led to an assist or two. Never really a direct threat himself but he played well in combination and seems to be at his best with a real target forward like Zardes or, ideally, Jozy Altidore next to him. Rating: 5.5

Brad Evans—On for Johnson in the second half, Evans had one of his best-ever games for the U.S. with a couple of well-timed tackles, a lovely nutmeg of Lukas Podolski, and the assist on the winning goal. Rating: 7

Kyle Beckerman—It’s hard to pinpoint one particularly outstanding play from the veteran but the U.S. got much better in possession when he was on the field and the Germans failed to score. None of that is a coincidence as Beckerman showed he still has a role on this team. Rating: 6.5

DeAndre Yedlin—Played right mid in the second half and created some near-chances and could have had an assist if not for a great save that denied Bradley a goal. Rating: 5.5

Jordan Morris—Continues to look every bit like he belongs despite his youth and amateur status. Barely missed scoring the game-winner with a great shot from distance and his dummy on Evans’ game-winning assist showed the kind of smarts that belies his youth. Surely European teams are noticing, right? Rating: 6.5

Bobby Wood—Another game, another game-winning goal off the bench. This for a guy who was struggling for minutes on a team that was relegated—to Germany's third division. Suffice it to say, after his beautiful two goals the past week he won’t lack for suitors. Rating: 7

Alfredo Morales—A quiet few minutes but he came on with his team tied and it ended with his team in the lead and he helped secure the fort in the hectic closing moments as the Germans surged for the equalizer. Rating: 5

Jurgen Klinsmann—Continues to push the right buttons, making the right subs and tactical adjustments. His faith in some call-ups that have raised eyebrows—like Morris, Wood, and Evans—continues to pay off as he has his team’s confidence surging heading into next month’s Gold Cup. Rating: 7.5