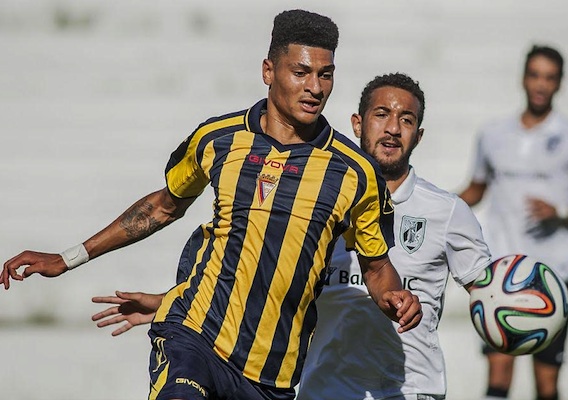 The 23-year-old forward, a six-foot-five dual-national, headed to Europe to pursue a career in professional soccer. After stops in Norway, France, Spain, and Portugal, he is making an impact in—wait for it—Bulgaria.
BY Brian Sciaretta Posted
June 03, 2015
3:00 PM

BORN IN NEW YORK CITY to a Norwegian father and an American mother, Bjorn Maars Johnsen spent his formative years in North Carolina, played a bunch of soccer in Norway after high school, caught on with professional clubs in the lower tiers of Spain and Portugal, and now finds himself starring in the Bulgarian top flight with the club Litex Lovech.

In other words, he's another ambitious dual-national willing to do whatever it takes to find success in soccer.

A tall center forward, Johnsen, 23, was a key part of Litex’s push for a spot in the Europa League. His standout moment came when Litex hosted league leaders Ludogorets on May 23. Johnsen produced a hat trick and also drew a penalty. Inter Milan scouts were in attendance to monitor a Ludogorets’ player but it was Johnsen who stood out.

“I didn’t understand the magnitude of it until today when I went to this restaurant and this guy looked at me like I was Ronaldo, “ Johnsen told American Soccer Now from Bulgaria. “It’s funny and surreal. But scoring those goals certainly helps your confidence. I’ve been getting better. It’s definitely different here in Bulgaria and it takes getting used to.”

Johnsen tied for the league lead in scoring during the championship round, a round robin tournament featuring the top six teams in the Bulgarian top flight. He has been one of the league’s stars since joining Litex in January.

His path to the little-known club in the 18th-ranked league in Europe is typically circuitous. While playing for Atletico CP in Portugal’s second tier he established himself as the league’s top scorer. In December, Benfica made an offer for Johnsen and it appeared to be a done deal. At the last minute, however, Atletico’s owner insisted on more money for Johnsen.

Atletico thought Benfica would increase its bid but instead the club walked away and signed someone else. Only a few weeks later, Atletico struggled to make its payroll and decided to sell Johnsen to Litex for a lower price.

“I really left with bitterness,” Johnsen said. “When I went to Europe, I knew I could perhaps move to a higher level. I never thought it would be Benfica. It was really frustrating. Benfica negotiated for months and got fed up. I wasn’t making much money and [Atletico’s owner] wouldn’t give me a chance to go and improve my lifestyle.”

Johnsen is happy now in Bulgaria. The move to Litex significantly increased his salary. It also offered him a chance to play first-division soccer and push for European competition.

Johnsen is hopeful that as he continues to succeed in Bulgaria, he will quickly move on to a bigger league. (Bulgarian teams are typically willing to sell top players.)

“Most of Portuguese second tier is really good because teams like Port B and Benfica B have really good players—it’s just that they’re young,” Johnsen explained.

Players in the Bulgarian league may not have the same high upside, but they tend to be more mature.

“The good teams here don’t make youthful mistakes," Johnsen said. "The players here are more experienced. Here you get one or two chances as opposed to four or five.

JOHNSEN EARNED all-state honors in high school but his best performances as a youth player came while playing for Triangle United, a youth team in Raleigh, N.C.,  that advanced to the U-18 national finals when Johnsen and current Houston Dynamo forward Robbie Lovejoy led the attack. The coach at the time was German-born Elmar Bolowich, the most successful coach in the University of North Carolina's history and currently the top man at Creighton.

“I recognized right away the ability and the talent level the kid had in terms of being dynamic,” Bolowich said of Johnsen. “He was good in the air, he was good with his feet. He was a player, as a college coach, that I would have had my sights set on getting him into a top-level University like North Carolina. He immediately mentioned that school was not his strong suit and wasn't all that interested.

“He had all the ingredients,” Bolowich continued. “Everything was right there. With a lot of other kids it’s the same way but they never make it. Bjorn was driven enough to mature and progress in the professional ranks in Norway and Portugal.”

After high school Johnsen bounced around the lower leagues in Norway without much success. In 2012 he traveled to Paris with a friend for a combine-like event to get noticed by scouts. That brought him first to Spain but then to Portugal in 2013 where his career took off at the age of 20. After scoring 10 goals in 28 games with third-tier Louletano, he moved to Atletico CP last summer and scored 14 goals in half a season.

Johnsen’s father, Hasse Johnsen, was his son’s youth coach at various times in North Carolina and firmly believes that Bjorn is only now approaching his potential.

“When he was 15, he decided he wanted to be a professional soccer player,” the elder Johnsen said. “The only thing that has held him back has been himself. At 18 and 19, there is a lot of stuff being thrown at you. Sometimes you need to prove yourself before you can get to the next level.

"He's got the talent. He's a late bloomer, I guess, but he's got some unique qualities. He's six-foot-five and he's very fast but very technical. He's got a great vertical jump. You don't see that a lot and that gets a lot of attention.”

Johnsen is in Bulgaria for now but he is eager to climb the ladder and quickly move onto the bigger leagues in Europe. One of his ambitions is to play internationally—he he has yet to play at any level for the United States or Norway.

While the Norwegian media is now actively covering Johnsen and listing him as a player in the mix for a call-up, the forward insists he's simply waiting to see who, if anyone, calls.

“I don’t have a preference,” Johnsen stated frankly. “I really don’t. These are big stages that you just want to play in. For me, I am American and I also am Norwegian.”

His Norwegian father admits to being biased in favor of Norway but hopes that there will be an international opportunity for his son with either federation.

“In Norway, it’s funny, they’re convinced that the United States is going to pick him up anyway because that’s what they always do,” Johnsen said. “Look at Mix Diskerud. He lived in the Norway his entire life. I am a Norwegian citizen, so for me it would be great if Bjorn played for Norway.