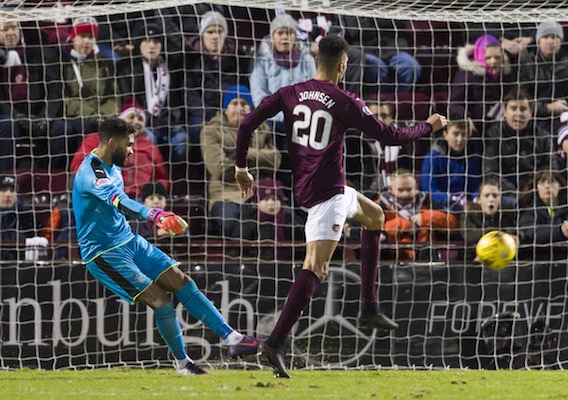 The Norwegian-American has endured a crazy 12 months, bouncing around Bulgaria and ultimately landing alongside Perry Kitchen at Hearts, where he won Scottish Premier League Player of the Month.
BY Brian Sciaretta Posted
December 15, 2016
12:00 PM

AS 2016 DRAWS TO A CLOSE, a number of American media outlets will be releasing their soccer Best and Worst lists, perhaps including categories like Most Improved and Biggest Surprise. If any of them opt to create a Wildest Ride ranking, that one would surely go to target forward Bjorn Johnsen. The New York native started of the year on a suspended club in Bulgaria, dealt with the shady owners of another Bulgarian club after a merger to negotiate a sale, and now ends 2017 as the Scottish Premier League Player of the month for Hearts.

A bit of context is in order: Almost one year ago today, Johnsen was one of the top forwards in Bulgaria’s top flight with Litex Lovech. In December 2015, however, the team’s manager refused to send his players onto the field to start the second half due to the team receiving two early red cards. As a result, the players could only play reserve and cup matches in Bulgaria.

All this time Johnsen wanted to move on and there was a deal in place to sell him to a Turkish club—but Litex ownership refused at the last minute. At the conclusion of the season there was an attempt to merge Litex with first division CSKA Sofia (whose owner used to own Litex before giving it to his son).

Johnsen, however, wanted out and argued his contract with CSKA was not valid. The problem was that Johnsen had to win that argument with CSKA owner Grisha Ganchev who was also on trial (along with his son) for organized crime and making death threats on a former head of Bulgaria’s National Revenue Agency.

Johnsen acknowledged it was a little “never-wracking” to be standing in front of a well-known mafia boss but also noted that this was not uncommon in Bulgarian soccer.

“Once you're there, it's very hard to get out,” Johnsen told American Soccer Now from Edinburgh. “I thought it was best to get out of Bulgaria because I was skeptical of the characters there. It's the jungle... you always have to be on your toes. You can't trust anybody.”

"My lawyer asked me: Do you want to continue in Bulgaria? I said I won't get anywhere in Bulgaria trying to get to the national team or anything like that,” he added. “Obviously I would like that if I could find anywhere stable. I just got lucky that Hearts already knew me and had scouted me. I didn't know anything about them until they called me and told me they wanted me to sign…but I didn't know if I would be able to."

The move to Hearts in Scotland took a little while due to the complex nature of his departure but eventually he won his right to move out of Bulgaria. And while Johnsen is happy to be playing for a normal and functioning club, Hearts is just as happy to have him as he has been one of the more promising newcomers in the Scottish Premier League.

Congratulations to @BjornMaars - The Ladbrokes Premiership Player of the Month for November???? pic.twitter.com/o8HVOBSg6i

It took a few games for Johnsen, 25, to break into the starting lineup for Hearts but eventually he did and his six-foot-five frame has been proving very difficult for defenders in Scotland to contain—not just his aerial game but also with his work on the ball. On Tuesday he was named the Scottish Premier League Player of the Month for November with his best outing coming on November 26 when he scored twice in a 3-0 rout of Motherwell.

So far this season Johnsen has four goals and three assists in 804 minutes of work for fourth-place Hearts. He is improving fast and will be a big part of the team’s push to make the Europa League next year.

Born in New York City but raised in North Carolina, Johnsen is not the only American on the team. U.S. national team midfielder Perry Kitchen was named the captain for Hearts in the fall and while the two never met before Johnson arrived in Scotland, they have become great friends. Johnsen notes jokingly that he is mad at losing this weekend to Kitchen in Fantasy Football as they both share an interest in the NFL.

"I didn't know him before but he's come in and done really well,” Kitchen said recently. “He's a point striker. He's tall but he's very fast and can run the channels. He's a good finisher and good in link-in players. He makes great runs and I enjoy playing with him.”

The heavy American presence is not lost on the fans in Edinburgh either as “USA” chants and American flags are now visible at Tynecastle Stadium when Kitchen or Johnsen do well.

“He's great, he's the captain,” Johnsen said of Kitchen. “Playing with him has been great. Playing with him makes you realize that American soccer is making the right steps in the right directions. He's very influential over here. I want both of us to do well here and really show what we're made of and that American soccer is no joke…..It's resonating with the people around the league - not just in our locker room.”

"They love us here,” Johnsen added. “They've opened their arms for us. We really appreciate that. Giving back to them when we're doing well—we want to show them we can do well."

But the move from Bulgaria to Scotland has also made Johnsen more visible to American fans as well as his goals are now mentioned among media covering Americans overseas. With that interest, Johnsen is hopeful that he can make in-roads with his next goal: getting a call-up to the United States national team.

Johnsen follows the U.S. team closely and is excited that Bruce Arena has taken over. While there are a number of successful forwards in the player pool—including Jozy Altidore, Jordan Morris, and Bobby Wood—the health status of Clint Dempsey and the uncertainties of other players may open the door for Johnsen.

Even if all of those players are involved, Johnsen is a traditional target forward—a type of player the U.S. current lacks. Johnsen is also eligible for Norway internationally but he grew up almost exclusively in the United States until he was 18 and is excited about the potential of representing the Stars and Stripes.

“I do really want to play for them,” Johnsen said. “I know that I want to show myself on the big stage. America can give me that and I am also a patriot. Hopefully that will come with a call-up. I think everyone is positive of a new change. We were all waiting for a change. We want America to do well in the next World Cup and the next Gold Cup. We didn't win at the last Gold Cup and we expect more and better.”

Johnsen is grateful for his opportunity in Scotland but also has his eye on bigger challenges.

“The Scottish league is good,” Johnsen explained. “People don't give it enough credit. When it comes down to it and you play against the best teams, the level is really high. These are players that play on national teams, in World Cups, and in Champions League. Almost every week I am playing against players that have played in England and have played in places I want to play in. Those things resonate with you

“I am really excited it went the way I hoped it would go,” he continued. “I wanted that opportunity to show everybody and now I just have to go out on the field and do it. It's been a long road but I am definitely excited. Hopefully this will bring more things.”