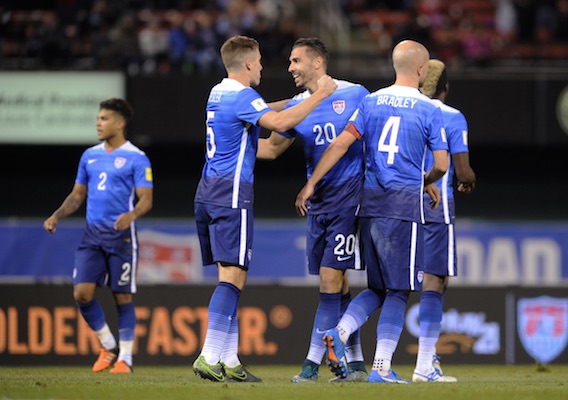 Jurgen Klinsmann used young central defenders in the 2015 Gold Cup and paid a price for it. Last night he started Matt Besler and Geoff Cameron, and Noah Davis wants to see more of the same.
BY Noah Davis Posted
November 14, 2015
11:00 AM

ST. LOUIS–Over the summer, it looked as though John Brooks and Ventura Alvarado were not just the center back pairing of the future—they appeared to have the present covered off as well. The duo started in wins against the Netherlands and Germany and three of five matches during the Gold Cup.

Meanwhile, Matt Besler and Geoff Cameron—the pair that appeared side by side in two 2014 World Cup games and started the three fixtures in the send-off series—were not on the roster, relegated to the bench, or in the case of Cameron and the Gold Cup, asked by a club to skip the tournament.

Fast forward a couple months, however, and the veterans are starting once again while Alvarado watches from the sidelines and Brooks leads the U.S. under-23 team as it takes on Brazil.

While Besler refused to say whether he thought he and Cameron were head coach Jurgen Klinsmann's No. 1 choice—"I don't know," he said after the 6-1 win over St. Vincent and the Grenadines. "That's for you guys to debate"—right now they are. And they should be.

Friday night's match wasn't a perfect showing for the two as the visitor's only goal came following a flubbed Cameron clearance. But overall the pair defended well and provided attacking options on set pieces, with Besler nearly scoring on a header and Cameron actually doing so moments after his teammate's miss.

They looked comfortable with each other and communicated well, providing outlets and helping to circulate the ball on a night when the U.S. was always going to have the majority of possession but could have struggled to break down a bunkered opposition.

For Besler, it was a simple role to fill.

"It's always easy playing with someone you've played with before, especially when you are trying to defend," the Sporting Kansas City center back said. "Any time you can be familiar with the other person, it is going to help you."

Later, he added, "I do think it's important to start getting consistent games with people."

That's the conundrum for Klinsmann. Besler, who turns 29 in February, and Cameron (31 in July) aren't young, but they aren't exactly old, either. It's easy to think that they can still be in their primes when the 2018 World Cup in Russia rolls around a little more than two-and-a-half years from now. While Alvarado and Brooks might have more potential, Besler and Cameron are much, much closer to realizing theirs.

Should Klinsmann place a priority on continuing to develop the veteran partnership or focus on bringing up the younger players with an eye on both 2018 and 2022?

The head coach and technical director was coy, recognizing the value of both and the difficulty of the situation. "We need answers over the next three years," he said. "Obviously, we need first of all to get the points, to get the results, and to qualify."

"At the same time, we also need to make [the younger players] grow and help them grow. That's why it's so important to get them out there and have a run and learn."

And it is. And they should. And they will. Klinsmann has shown he's more than willing to throw inexperienced talent into the fray and see who came handle the pressure. Some, like DeAndre Yedlin, succeed. Some, like Alvarado, showed flashes but struggled.

Regardless, now is not the right time to give less experienced players opportunities. Now is about winning. Now is about going with your best backline, the guys who have been there before and succeeded, the guys who can defend and who can get forward and help score as well.

Now is the time for two center backs who know each other's game and are comfortable enough to poke fun in the middle of a match.

Following Cameron's goal, he and his defensive partner shared a smile on the field.

"We were joking because I had missed a header about five minutes earlier," Besler said. "I told him that he one-upped me."

After the first few minutes, Friday night was good fun for the entire U.S. national team. But the Road to Russia gets more difficult on Tuesday, and when things get serious, Besler and Cameron have to be the answers at center back.

Do you agree with Noah's take? What is your preferred central defense pairing? Tell us below.