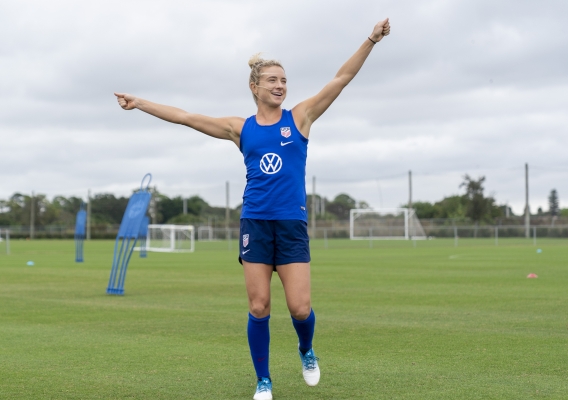 Back with the USWNT for the first time since 2014, Mewis remains ambitious

As a youth player, Kristie Mewis was one of the top prospects in the game. But injuries and frequent trades limited her ability to grow. Now back with the USWNT for the first time in years, she is ambitious as ever. ASN's John Halloran reports
BY John Halloran Posted
December 16, 2019
10:00 AM
GROWING UP, Kristie Mewis was one of the most heralded prospects in the U.S. national team’s youth setup. She represented the team at the U-17 World Cup, the U-20 World Cup, and won U.S. Soccer’s Young Female Athlete of the Year in 2008.

That success translated into a regular run of call-ups with the senior team, as she went on to earn 15 caps between 2013 and 2014.

Then, however, Mewis fell off the national team radar and began bouncing around on the club level. Between 2013 and 2017, she was traded five times in the National Women’s Soccer League—often in exchange for some of the best players in the game—and also spent time abroad in Australia, Japan, and Germany.

By 2018, Mewis had finally settled in Houston, but then another hurdle hit, this time a torn ACL.

That meant she would be spending anywhere from nine months to a year on the sideline, and fighting her way not only through a physical recovery, but the mental battle that comes along with it.

“You’ll try to do something that you used to be able to do so easily and you can’t do it anymore and it is really discouraging,” Mewis told American Soccer Now. “There’s a lot of crying. I probably called my sister or my dad every day just crying to them about it. I think that’s just part of it. You have to hit some lows to get better.”

“It is such a struggle for such a long time and things that used to come so easily to you no longer do,” she added. “But I’ve never learned so much about myself than in the past year and a half, so I feel like a lot of good came out of it too.”

In 2019, Mewis made her return to play about three weeks shy of the one-year anniversary of her injury, and ended up starting 20 out of 24 games for the Dash this past season. Then two weeks ago, her hard work paid off in another big way—she was one of 24 players named to U.S. head coach Vlatko Andonovski’s December ID camp.

“Putting the U.S. crest on again was pretty cool. I always hoped that I would be able to do it again,” said Mewis.

“It was definitely a special moment for me since it has been a really long time.”

The 28-year-old contends that she’s back to 100% again since her injury and now aiming even higher. She says that her recovery showed her where her weaknesses were and that she took the opportunity to make herself physically stronger.

“I have made huge strides to get back,” she explained. “But I obviously don’t want to just get back to where I was, I want to get back to an even better place. So that’s what I’m striving for. I want to be better than I was before I tore my ACL. I don’t just want to be the same.

“It definitely has been a long process, but I do feel that I have never worked so hard in my entire life and I’ve never pushed myself as hard as I am right now.”

In addition to moving around the world as part of her club career, Mewis has spent much of her career moving around the field. With such a diverse skill set, different coaches have played her everywhere from left back to left midfield to center midfield. And while having multiple coaches’ confidence to play in numerous spots is a compliment, it has also made it harder for the Boston College alumna to excel in any one position.

“Through my career, I’ve been a utility player for quite a few teams,” said Mewis. “In my first couple years with the national team, I was kind of the utility player. I went where there was an open spot. I do think that it has been hard growing my career as that utility player because you never really get to narrow down that one position, or excel in one position.”

This past season, many had tagged the Dash to be a possible playoff team in the NWSL. However, that didn’t happen. The team struggled, finishing 7-12-5 and seventh in the league. Still, Mewis thinks the team is finally headed in the right direction after years of underperforming and, in her third year with the club, she now also feels like a part of the community in Houston.

“I’ve grown to love the city and the team,” she said. “James [Clarkson] is a great coach, the organization just has so much potential, so I’m really looking forward to this next season to see what we can accomplish.”

Mewis also has high hopes for herself and her future with the club.

“I want to be one of the best midfielders in the league,” she said.

Back with the American team for the first time since 2014, Mewis has also been reunited with head coach Vlatko Andonovski. The two worked together before in Mewis’ rookie season after FC Kansas City drafted her with the third overall pick in 2013.

“[Vlatko’s] a character,” said Mewis. “I love him. We go way back because he drafted me to Kansas City. He’ll always have a special place in my heart just because I started my professional career with him.”

As for her own personal goals during the camp, Mewis has high aspirations.

“I want to be the best player here,” she said. “I want to be a leader. I know there’s a bunch of younger girls here. I want to be someone that they look up to. I want to set a good example for them. Honestly, I just want to play as best I can and just have some fun.”

“What’s soccer without some fun.”