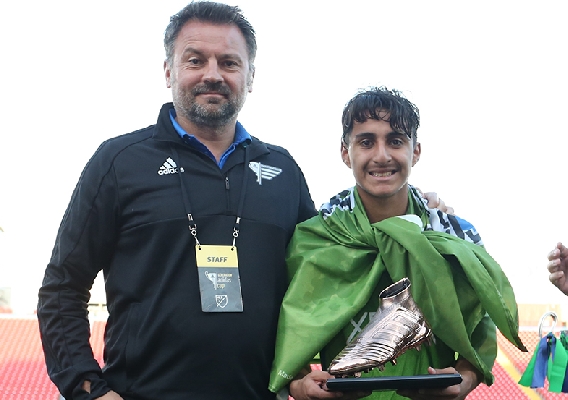 Wednesday brought blockbuster news that US Soccer terminated the Development Academy due to financial reasons. To fill the void, MLS quickly announced an elite youth competition that would also try to consist of youth teams outside of MLS. ASN spoke with the league's Technical Director of Youth Development, Fred Lipka about the program's goals.
BY Brian Sciaretta Posted
April 16, 2020
7:55 PM

ON WEDNESDAY, U.S. Soccer formally announced that would terminate the Development Academy for financial reasons. As the federation’s top youth initiatives that helped to provide structure for youth development in the country, its absence created a void. Later that same day, Major League Soccer announced the creation of an elite youth competition that would help step in to the hole left by the DA’s termination.

Specifics are still being put together but the announcement on Wednesday highlight an approach that would also include non-MLS academy teams and have a wide-ranging emphasis.

“Major League Soccer today announced it will launch a new elite youth competition platform which will provide year-round high-level matches for MLS club academy teams and non-MLS academy teams that previously participated in the U.S. Soccer Development Academy,” the statement read. “The new platform will provide elite competition against domestic and international teams, and MLS is evaluating expanding participation to include clubs beyond the former Development Academy.

“The new platform will include league season matches and both regional and national tournaments with international teams,” the statement added. “It will also expand coaching education and improve the approach to player identification to ensure top players have the opportunity to participate in a high-level development environment.”

While the program is still being assembled, ASN spoke with Fred Lipka, the Vice President and Technical Director of MLS Player Development, to get a better understanding of the approach, goals, and ambitions of this program at a very early stage.

Previously, Lipka was at Le Havre in his native France where the club's academy helped develop players such as Paul Pogba, Lassana Diarra, Steve Mandanda, and Dmitri Payet.

Brian Sciaretta for ASN: This program seems to be in its very early stages since the sudden end of the DA. How long had this been planned?

Fred Lipka: This wasn't planned at all. It was surprising. Everyone was expecting continuity with the competition pathway, the DA in particular. The decision was announced the day before yesterday although three or four days before the announcement the rumors were so intense and present that we needed to think and realize it was coming... we needed address a clear message to our players, to our families, to our clubs, and also the community. I think we also have an objective to be responsible of all key players which play in our clubs but also to all the others which are around and love the game and have an individual objective to become professional or play at a good level. The first objective was to think about our players but it is selfish to think we are only going think about us.

ASN: Was this agreed upon all MLS owners that this had to happen? Were most on board with undertaking this?

Lipka: I am going to be honest. Nowadays, spending money and investing money is not an easy decision. This was a very important one and wasn't discussed much. We didn't need to discuss a lot to make this decision. The owners created this league when soccer was kind of a new sport in the country. They always had in mind, not the short-term view but also the long term. This project is a long-term thing.

ASN: The age groups being discussed right now in this competition, are they similar to what was in the DA?

Lipka: For the sake of everyone and the kids, we are going to first and foremost going to guarantee the same categories and the same teams and the same capacity as we played last year, and should have played this year. It'll be the status quo in the way we play. There may be some adjustments but if you are in Texas and you are a U-14 team in the DA, we will find a way and guarantee this level of competition.

ASN: Is that for the foreseeable future?

Lipka: I think we have to think about it but those ages are important. I will tell you I don't tell you all MLS clubs will have to have a team in those categories - like U-14 because sometimes it makes no sense when you are isolated and it makes more sense to count on your affiliated network and alliance program to do the job for you and maybe optimize your development model at those ages. But we can provide the platform. We want to give the flexibility of our clubs to sign up the teams they need and speak with their own development project.

ASN: What has been the initial receptiveness among the non-MLS clubs?

ASN: Is it going to be very different from the scheduling and format of the DA? The issue of travel was always big.

Lipka: First, we have to build the department for this. I can't tell you today what it is going to be. But I think logically, I will give you an example. We are [concerned] about the cost and the travel. Traveling maybe can be done at a certain level and a second way for some clubs. I think about MLS because we need to address a specific environment and some teams are isolated. As an example, the summer showcase we absolutely needed. It was necessary for all of the teams. Can we think maybe about regionalizing the showcase to try to avoid maybe to fly the teams? I won't tell you what will happen but the idea is to say how we can maybe avoid some travelling for some non-MLS teams. We have to address the travelling according to the objective that each teams has.

ASN: International tournaments were mentioned in the announcement. Do you have goals and objectives for this?

Lipka: The international component is a key piece of development pathway, especially in MLS. So we are going to keep going. We are going to try to find more flexible ways to do it with our close partners. We need to give more opportunity to our teams to be able to compete. I can say today what it will look like but as an example, the GA Cup was good example and a very important event to realize all the work we need to do and also validate and benchmark all the good work we are doing over the past year.

ASN: What are the next steps and the big challenges in the weeks and months ahead? I know the COVID-19 shutdown limits you a little.

Lipka: I think the next thing to do is design the right model and be able to forecast - which is very important when we can start. Ideally it will be for the next season in September but I am not sure it will be possible....For now, the priority is to communicate to the non-MLS clubs and with our clubs to think about the model. To have an interaction with the non-MLS teams and not pressure anyone - to understand there is no rush to make a decision today. We are weeks and maybe months away to find the best solution.