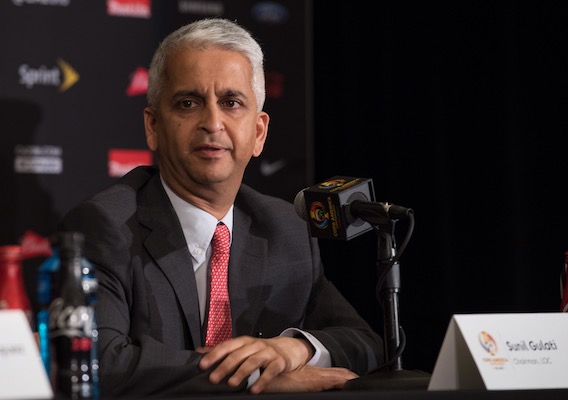 As Winter Sets in, All Eyes Turn Toward Sunil Gulati

The U.S. men's national team is in disarray, the players seem have to quit on Jurgen Klinsmann, and World Cup qualification is in jeopardy. So what are you going to do about it, Sunil—fix it or look the other way?
BY Brian Sciaretta Posted
November 16, 2016
7:10 AM

CONTRARY TO THE GENERAL SENTIMENT among American soccer fans Tuesday night, the sun did in fact rise Wednesday morning. The silver lining on the heels of an embarrassing loss that jeopardizes the United States national team’s World Cup qualifying is that at some point, much better days are ahead for the program. The cold reality, however, is that many tough decisions need to be made to right this ship which has gone far astray.

No matter what happens, American soccer now has its own version of the Winter of Discontent. Here is what Costa Rica made clear to the U.S. team and its fans.

This has been a brutal week for the U.S. men's national team. It lost to Mexico on a sloppy unforced error. The coach sent the team out in a formation that made absolutely zero sense given that it had never played in that formation before—and it was playing against a well-coached arch-rival who picked it apart with ease. By the time the U.S. adjusted, they were chasing the game.

Then, last night against Costa Rica was a total mess. Every player on the U.S. team just looked like it had given up by the second half. The bottom line and the leading indicator right now is that every American player on the field last night is now performing better for his club than he is with the national team. The team is playing so far below the sum of its parts that it is alarming to all those who have a working knowledge of the player pool.

Whether players are stars in MLS or the Bundesliga, they arrive in the U.S. setup a shell of their former selves. This has been apparent with Michael Bradley for over a year. John Brooks, howeer, has been a standout in the Bundesliga but against Costa Rica he had maybe the worst performance in decades by an American central defender. Klinsmann was critical of Brooks after the Mexico game, naming him as the culprit for missing his marker on Rafa Marquez’s winner. Days later, his confidence was nonexistent.

The list goes on. Timothy Chandler is having a career year at Eintracht Frankfurt and he was poor for the Yanks. Fabian Johnson and Bobby Wood probably acquitted themselves the best and they were merely average. You would never know Omar Gonzalez just won a Liga MX title with Pachuca.

The international game is vastly different than club soccer. Over the course of a 40-game season at the club level, talent tends to win out over the long haul and both players and teams find their true level. The international game, however, is not the marathon. It is a series of short sprints. All sorts of intangibles—emotion, heart, bleeding for the shirt, playing for your countrymen and the flag—play a big role.

Frankie Hedjuk had limited skill but he was an outstanding national team player that was instrumental at the 2002 World Cup playing out of position at left back. Not only could the U.S. team have used Hedjuk against Costa Rica, the team could have used 11 Frankie’s.

When Johan Venegas, a bench player for the Montreal Impact, schools John Brooks several times there is an indication of a big problem.

Are the players not buying into Klinsmann’s system? Are there better players who would be better on this stage or in the system who might not have the nice resumes of the current core? Or is the problem worse in that it is such a toxic environment that the players don’t even want to be there anymore?

These are important questions that need to be addressed now and unfortunately it couldn’t have come at a worse time as there is no margin for error in qualifying.

It is about heart

With all the problems listed above, you connect the dots and it leads straight to Jurgen Klinsmann. He has been given unprecedented power within U.S. Soccer as both the national team coach and the federation’s technical director. He assumed full control of the program and with that comes tremendous responsibility.

For years the U.S. was known for its heart. The Americans always outworked their opponents. Sometimes it would lose but it would also lead to surprising results. Last night, the team resembled Holland's 2015 squad, which played far below its potential and somehow did not qualify for the European Championships despite superior talent.

There is no shame in losing to Costa Rica on the road, but when the team looks like it gives up in this sort of game it is the sign of a far bigger problem. As Holland showed, these things can be very difficult to correct. Winning becomes exceptionally difficult against any opponent when the team simply does not believe in itself, or its coach.

CONCACAF's qualifying format can be forgiving but there is no indication right now that the U.S. should beat Honduras at home in March. On paper the U.S. should win but the reality is far, far different.

American fans are calling for Klinsmann’s job right now en masse. And there is plenty of evidence right now that would point to the need for a change. The problems obviously run very deep.

With any other federation, Klinsmann probably would have been fired at the stadium last night. But U.S. Soccer values the patience it has given its coaches as just four people have held the national team coaching job since 1995. That is not necessarily a bad thing, as federations that hire and fire coaches at an alarming rate struggle to build a program.

But that does not mean Klinsmann’s job is safe. And, it's worth pointing out, right now is the last decent chance to make a change. The next qualifier is not until March and with January camp in between there is plenty of opportunity for a new coach to get settled.

But that would require a huge gut check from U.S. Soccer president Sunil Gulati to make a difficult choice. He wanted Klinsmann to run the U.S. team dating back to before the 2006 World Cup. When he finally landed him five years later, he gave the German an unprecedented extension before the 2014 World Cup and expanded his powers.

Gulati has been Klinsmann’s biggest supporter and to fire him could reflect poorly on his own judgment. On the other hand, Gulati simply cannot not afford to see qualifying for the 2018 World Cup jeopardized. That would be an enormous black mark on the program under his watch. So there are huge factors at play.

If Gulati does decide to make a change, the replacement would almost surely be someone close to the program who knows the players and the problems at hand. All signs point to Bruce Arena as being the most logical candidate.

There is an understandable urge to hire a tactical wizard like Marcelo Bielsa or Guus Hiddink. After all, Klinsmann was brought in to change things in that regard. Unfortunately in the current situation, the team is so far beyond needing tactical instructions. The loss to Costa Rica revealed that the problems are fundamental.

This isn’t about building a team, this is about salvaging a cycle. Right now the team needs man management and someone who can have the players excited to report to a U.S. camp. Arena had a tough job in 1998 to rebuild the team on the heels of the mess Steve Sampson left but he did it rather quickly—all while working with veterans like Claudio Reyna and Eddie Pope, introducing youngsters like Landon Donovan and DaMarcus Beasley, and managing total wildcards like Clint Mathis. At this point, the situation is not much different.

If Klinsmann does stick around, he is going to have to make serious changes. January camp needs to introduce new blood and find players who can thrive on the international stage. Tough cuts need to be made and honest discussions need to be held with established veterans as to what the real problems are.

Right now, the ball is in Gulati’s court.

Share your thoughts below, soccer people. We want to hear your take.