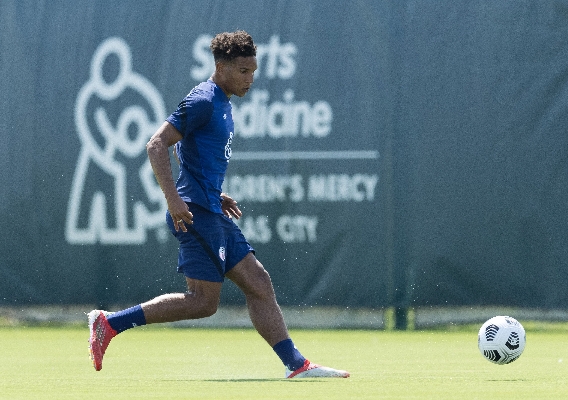 Gioacchini left his native Kansas City when he was eight years old and through his life has lived in places such as Italy, Washington, D.C., and now France. Now a member of the United States national team, he will have the opportunity to make an emotional homecoming to where his soccer and life journey began. ASN's Brian Sciaretta is here with his story.

ONE OF THE MANY benefits to being a professional soccer player is the opportunity to see the world. With games, leagues, and tournaments all over the globe, players have the chance to regularly travel to different countries and continents to see different cultures and languages. For SM Caen attacker Nicholas Gioacchini, however, soccer is providing the rare opportunity to return home.

A native of Kansas City, Gioacchini left when he was eight years old to move to Italy with his family for his father’s pasta machinery business. When he returned to the states, he lived in Bethesda, Maryland before returning to France – where he would eventually begin his professional career in his later teenage years.

Through his many travels, however, he never lost sight of where it all began for him.

“It's a special moment,” Gioacchini said. “It's an emotional moment. I got off the plane and I recognized the airport from about 10-12 years ago. I saw changes. I smelled the air, it smelled the same [laughs]. It is a great feeling. It warms up my heart being able to hopefully play in front of people from my town. It is going to be great - it is going to be fantastic. Honestly, I couldn't be happier.”

Gioacchini, who will turn 21 during the Gold Cup, will have a smaller group of about 10 family and friends in attendance throughout the group stage games. Jay Burgess, the coach of his youth team – the Orange Stars of the Blue Valley Soccer Club will also be in attendance along with his wife and son - who was a teammate of Gioacchini on the Orange Stars.

The Blue Valley Soccer club has long been one of the top youth clubs in the region and Peter Vermes was the club's Technical Director at the time. In 2011, the club became Sporting Blue Valley and was an affiliate of Sporting Kansas City. 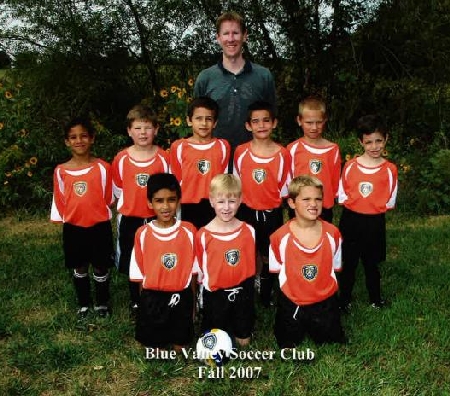 "He was always a very attentive player on our team," Burgess said of Gioacchini. "He obviously was very focused and at that age, was quicker than a majority of the kids. At that age, the fundamentals are trying to be figured out. We worked the drills, I told people that we just wanted the kids to have fun and come to practice and understand the game. Most kids at that age want to screw around but he was always very respectful and very attentive. He tried hard to do the drills well. You can see kids that want to be on a soccer field with those who don't. He wanted to be there and get better."

While Gioacchini has how moved onto to the professional level and the international level, he says his roots in the sport were started in Kansas City when he fell in love with the game. 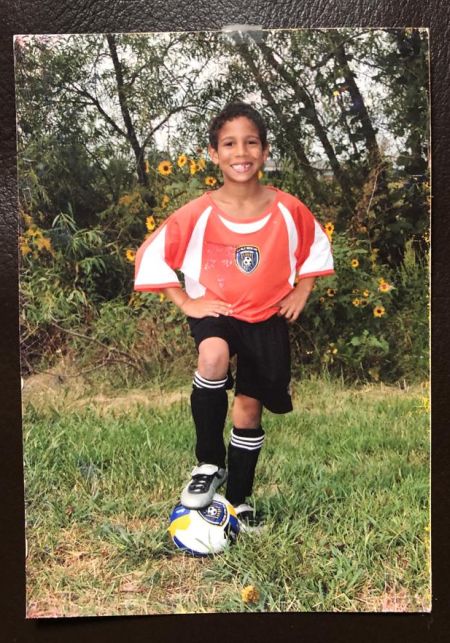 “Kansas City is really home for me,” Gioacchini said. “I've lived in a bunch of places and on and off the pitch, Kansas City is home. I just feel back to where I came from and maybe eventually where I belong. But back to the soccer part, sometimes I think about when I was young, and I just played soccer for the pleasure. I didn't think about any of the stress or the teams where I wanted to be. I just saw the ball, saw a bunch of guys playing with a smile on their face, and I wanted to feel the same. It's just a home where I want to bring back this pride. This is Kansas City and I see soccer has developed extremely over the past 10 years. I just want to keep it that way.”

“That is my dream - to make this the center of soccer in the United States,” he added.

On the field, Gioacchini has wrapped up his first training sessions and he said that right now he is trying to learn as much about his teammates as possible as many of them are new to him. Off the field, he frequently studies his teammates as players and gathers information constantly to learn about how they play, the runs they make, and the way they read the game.

While every player offers something different to the team, Gioacchini believes his mental strength can be an asset. Playing in France’s 2nd tier is not the highest levels of the game, but it is tough and every game in the league is a battle. 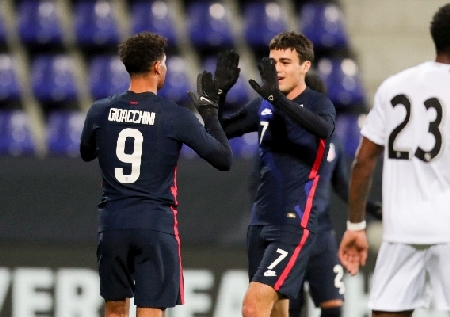 Gioacchini was not part of the Nations League roster but he watched the U.S. team’s memorable 3-2 win over Mexico in the final and pointed out just how important this area of the game is.

“Mexico has an extremely strong mental game,” Gioacchini explained. “The U.S. in the end was triumphant because mentally we were more relentless. WE knew we came back from Mexico having scored first and we had nothing to lose in the end. We had to just give everything, and it came through. Mexico has a team where they are technically strong, physically strong, and they don't give up. I come from a league in France which is technically not very strong but it's very physical and very mentally challenging. Those are the areas I can bring superiority to.”

“We had our first training today, which was fantastic,” he continued. “[Gregg] asks us all for a few things in common - determination, being relentlessness, the characteristics of never giving up, bravery. Those types of things. As long as we have those things as a group, that will make us stronger from the grand perspective.”

The final against Mexico was a big moment for the U.S. team under manager Gregg Berhalter and it was the first significant test of the core group of the current player. While Gioacchini is yet to win silverware at the professional level, he recently was part of an experience that put his toughness to the test. 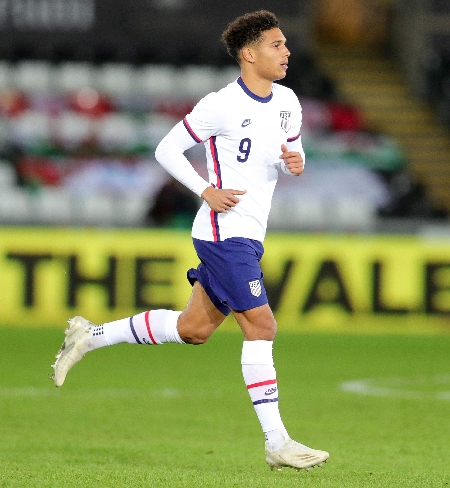 Down the stretch of the Ligue 2 season, SM Caen tumbled badly. Entering into the final week of the season, the team had won just once in 21 games. It needed a win in the final game of the season against Clermont Foot along with needing two other teams in the standings to drop points.

Caen ended up getting the help it needed in the standings but its own game against Clermont Foot was wild. Reduced to 10 players in the 38th minute, Caen took a lead in the 82nd minute but conceded an 89th equalizer in what appeared to seal its fate for relegation to the third tier. But Caen was able to find a stunning winner deep into stoppage time via a penalty. Gioacchini played the entire second half in the critical and improbable victory.

Battle relegation amid a horrible skid in the second half of the season was not a pleasant experience but Gioacchini believes he is better for it and that its successful outcome taught him a lot as a player. 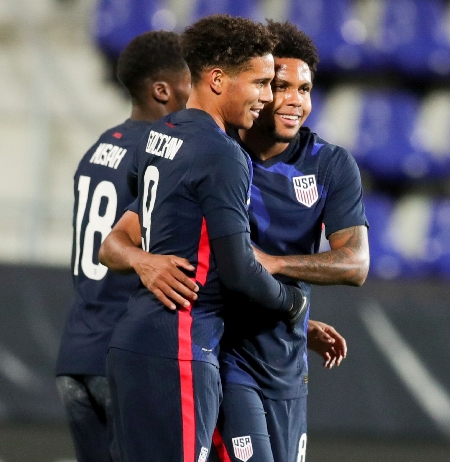 “It's a tough experience but a very important experience,” Gioacchini said. “It's a learning one. It's one as a young player, the sooner you learn to be in situations in those circumstances, the better it is. It makes you stronger mentally. It gives you those characteristics of a player who doesn't give up. It's not something you necessarily want to experience but you know that it is only going to help you. It's coming from a club who shouldn't be where we were. It's difficult but we got through it because our heads were into it. In the end of the day, we remained in the same division because we had that bravery, and relentless mentality.”

Gioacchini has been through a lot the past year with the relegation battle and his first USMNT callup – which included a two-goal outing in November against Panama in what was his second cap. Heading into this summer, he has even more on his plate. The Gold Cup will mark his first major international tournament and it will cap tie him to United States (his mother is from Jamaica and his father is from Italy, thereby giving him eligibility to both countries). It is also very possible that if he plays well at the Gold Cup, it could open doors for a move to a better team that Caen.

Before he moves forward with his next steps, however, Gioacchini is happy to make his long awaited homecoming and return to where it all started for him in the neighborhood of Overland Park.