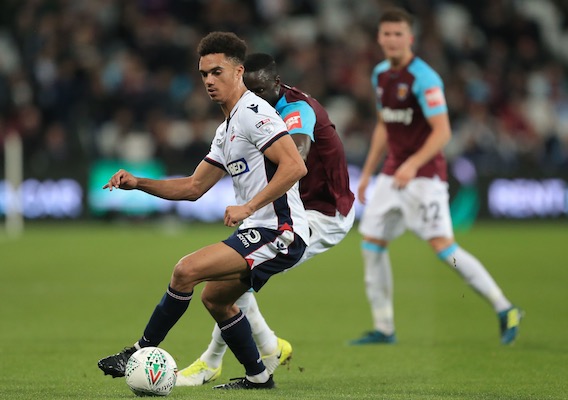 Antonee Robinson Making Most of Loan to Bolton

The 20-year-old Everton left back has returned from a serious injury and is now on loan to the bottom-dwelling Bolton of the English Championship. Brian Sciaretta spoke to the British-American athlete.
BY Brian Sciaretta Posted
October 30, 2017
7:00 AM

DESPITE BEING only 20 years old, Antonee Robinson has been through a lot in his young career. A few years back he signed a Premier League professional contract with Everton and had been on the verge of a breakthough both with the club’s first team as well as with United States youth national teams. A serious injury put those plans on hold but Robinson is back on track while on loan with Bolton of the English Championship.

Back in August, Bolton announced that it had acquired Robinson on a loan from Everton through January in a rush to sign players after its promotion from third-tier League One last season. It was a win-win situation as Bolton was looking for a left back and Robinson was looking to start his professional career.

Many expected Bolton to struggle this season, and so far that has proved to be the case as Bolton sit in last place after 14 games. But things have been looking slightly better for the Wanderers lately who have secured five points from their last three games.

Robinson has made six league appearances with Bolton and has seen action in three Cup appearance, marking the start to his professional career. On Saturdayhe came on just after halftime in a 1-1 draw with Fulham.

“It's been going really well,” Robinson told American Soccer Now. “It's obviously a new experience being with a first team. The results aren't going our way at the moment but it's a good group of lads. It's good to be around men instead of boys and playing against men. It's been a good experience so far. I feel like I’ve been playing well.

“Realistically, you never know if you’re going to stay at one club or not. I’ve been [at Everton] since I was younger but it’s good to have the experience of going out and meeting a new group of lads and getting out of your comfort zone.”

Bolton manager Phil Parkinson was happy to have him.

“We have been looking for a left back for a while,” Parkinson said. “We like the look of Antonee, he is a good defender. eHe has great athleticism. He’s young, hungry, and was keen to join us. He is a good addition to the squad.”

Robinson's journey to the professional ranks has been a rollercoaster ride. A longtime member of Everton’s Academy, Robinson was named Everton’s U-18 Player of the Season in 2015. Afterward he signed his first professional contract.

At just 17, he joined the club for preseason in 2015 but in his very first game with Everton’s first team he suffered a very serious injury that required microfracture surgery in the cartilage of his knee—a procedure from which some never fully recover.

“But I got a serious knee injury and I was out for the whole season. At the time I was really scared. I knew I was going to be out for a long time. I only had one year left on my contract and I knew I would miss the rest of the season. I didn't know if another team was going to give me a chance. It was frightening but I worked hard to get back fit. The youth team manager just looked at me and said that we'll give you another year to prove yourself. I did well the following year.

“My Dad always told me that any injury you get will test your mentality, and if you get through it you'll be a better player for it.”

After missing all of  2015-16, Robinson rewarded Everton’s faith in him during the 2016-17 campaign, making three appearances in last season’s Checkatrade Trophy, including Everton’s 2-0 victory over Bolton at Macron Stadium. He also was a regular with Everton U-23 side that won the Premier League 2 title.

As this season got underway, Everton and Robinson both agreed that he needed a loan to play first-team soccer. Despite his short-term status—the loan is only through January—Robinson is determined to help his new squad avoid relegation.

“To be honest, we just need a bit of luck,” Robinson said. “There's not much else the lads can do. Especially at the start of games, we've been playing well. Obviously it's been disheartening when you concede a goal late when you 've been playing well. But when we get the momentum, we'll start getting a few more results and hopefully avoid relegation.”

Of course, Robinson is also adamant on returning to international soccer and hopes to be part of the future plans for the United States. Left backs in particular have been especially tough to come by for the U.S. and Robinson has been playing the position for years. Formerly a left wing with Everton's academy, Robinson filled in at left back when another player was injured and the position fit like a glove. Since then he has never looked back.

The England native is a dual-national who was born in Milton Keynes and raised in Liverpool. His father, Marlon Robinson, was also born in England but moved to White Plains, New York, during his childhood and was a standout on Duke University's soccer team from 1981-1984 and helped Duke advance to the NCAA final in 1982.

During his time in the United States, Marlon acquired American citizenship which he was then able to pass onto Antonee. Growing up, Antonee has made an occasional trips to the United States to visit and holds particular fondness for his family trips to Florida as well one trip to Texas to play with Everton at the Dallas Cup.

In 2014, the younger Robinsone was briefly a part of the United States U-18 team under Javier Perez but he eventually fell out of the picture following his injury. He was not part of the 2017 U.S. U-20 team.

Robinson recalls the experience of playing for the United States as a career highlight. Even after his injury, he kept in touch with a few of his teammates including Brooks Lennon who played for nearby Liverpool at the time. He even recalls with laughter talking with Tim Howard when he was still at Everton although he Robinson believes Howard “didn’t know I was even American.”

Robinson is well aware that despite the setbacks of the United States internationally, the Olympics are a big priority and that Americans in his age group are doing well professionally. When the U-23 team begins to assemble for Olympic preparation, he hopes to be a part of it.

“It was brilliant,” Robinson recalled of his previous U.S. involvement. “I got to meet the team and take my first steps in international football. They were very welcoming even though I was from England. It was nice to represent them and they showed a lot of faith in me in asking me to come along. I'd love to go again.

“If they called me up, I'd be more than happy to play for them. Especially for a big tournament like the Olympics.”