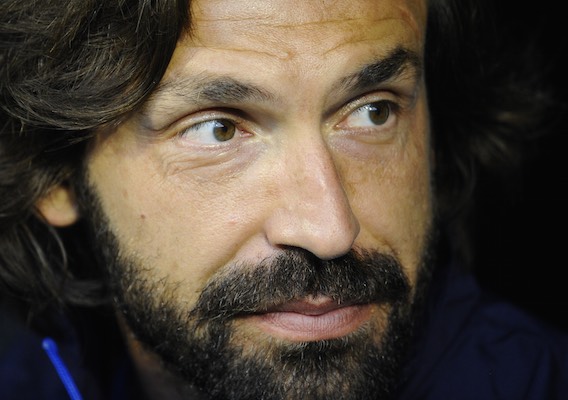 The Business of Soccer

Andrea Pirlo Signing Is a Shrewd Deal for NYCFC

A month ago the 36-year-old Juventus midfielder was playing in a Champions League final. Soon he’ll be drawing fans to the Bronx and eyeballs to TV sets. It’s a brilliant signing for NYCFC and MLS.
BY Ted Philipakos Posted
July 17, 2015
11:15 AM

A BONA FIDE LEGEND, with singular talent and iconic style, in the autumn of his career but only one month removed from playing in the final of European football’s top competition, is the latest catch for a club that’s in its inaugural season and looking for some quality and star power to compete in a tough marketplace.

It takes a special kind of insecurity and defeatism to immediately look for something wrong with this picture.

Welcome to the American soccer community.

Last week, New York City FC announced the acquisition of 36-year-old Italian international Andrea Pirlo—a FIFA World Cup winner, two-time UEFA Champions League winner, and six-time Serie A winner (including the last five seasons in a row)—from Juventus. Sure, that may read impressively. But some observers have framed the signing as an overpayment for an over-the-hill player.

So, what’s the deal? Is Pirlo good business?

There’s massive potential in merchandise. And there’s new potential in corporate partnership, as brands will be enticed to associate with Pirlo’s image through the club.

Furthermore, Pirlo delivers brand equity that serves as a springboard for future business growth. To illustrate the point, consider David Beckham. Beckham completely changed the perception of the Los Angeles Galaxy brand, making it something especially distinctive and attractive, something that represents success and glamour, and the club has managed to harness that energy and carry it forward. And although he’s retired, Beckham is still a component of the club’s brand; when you see the L.A. Galaxy’s name or logo or jersey, it’s likely that Beckham is still in the mix of your emotional response. Such brand equity has significant influence on the thinking and behavior of both sponsors and fans, supporting association and engagement.

There’s a related impact in the player market as well—without Beckham, “L.A. Galaxy” would’ve meant something different to Steven Gerrard; without Beckham and Gerrard, “L.A. Galaxy” would mean something different to Giovani dos Santos. While Pirlo doesn’t possess Beckham’s celebrity status, he’s still an iconic figure, one of the most recognizable and revered players of a generation, and he’s a game changer for the NYCFC brand.

And Pirlo’s value extends beyond New York. His arrival is critical for MLS as a whole—most notably, on the television front.

Television revenue has become the lifeblood of major American sports. As networks engage in vigorous competition for live sports programming—inherently valuable in the age of the DVR and “time-shifted” viewing—billions of dollars are pouring into the traditional four major leagues. But there’s only a slow drip into MLS, which has historically struggled to attract viewers, despite robust live attendance.

While MLS has been encouraged by the growth of the television audience this year, it’s very modest growth. More than anything, star power has the potential to make the difference. And the signing of Pirlo is part of a broader effort to reach a critical mass of star power that may finally set off substantial growth.

In this context, Pirlo’s beard alone is worth a couple million. Seriously, though—go ahead and type “Pirlo” and “beard” into Google. The results include Buzzfeed’s Definitive Proof That Andrea Pirlo’s Hair is God’s Defining Achievement; Deadspin’s Andrea Pirlo’s Bomb from 30 Yards Out is Almost As Majestic As His Beard; and The Mirror’s 21 reasons why Andrea Pirlo is the coolest footballer that ever lived.

This is where stardom transcends sport. This has immense value. Some fans may resent it, but it’s the reality of the business.

To be clear, this isn’t to suggest that the league will be or should be focused on this type of player only. In the last few years, there’s been unprecedented commitment to player development. Just a few days ago, MLS unveiled a new mechanism called Targeted Allocation Money designed to stimulate investment in the $450,000 to $1 million range. And, like Giovinco and dos Santos, the Designated Players slots will be used on players in their prime where it’s feasible. But players of Pirlo’s stature are a crucial part of the mix.

In addition to television, growing star power also has the potential to further MLS’s momentum with blue-chip brands in the sponsorship space (recent deals include Coca-Cola, Johnson & Johnson, Audi, and Mondelez).

A significant boost in television and sponsorship—central revenues in which each club has an equal share—would be the best way to prop up some of the league’s low-revenue clubs, which in theory should make them more willing to ultimately agree to expand the league’s spending structure, which in turn would raise compensation for average players.

As for the cost, Pirlo reportedly earned about €3.8 million net last season with Juventus. He’ll reportedly earn $8 million gross per year with NYCFC—and when you account for the top federal tax rate (39.6%) and top combined state and city tax rate (12.7%) plus an estimate for “jock taxes” (variable by state) and the exchange rate (1€ = $1.10 this week), Pirlo’s take-home pay in New York City should be roughly equivalent to his take-home pay in Turin. (If you want a precise breakdown, jump on Twitter and pester Robert Raiola, @SportsTaxMan.) The Juventus contract was signed just last summer, so it’s not a completely obsolete figure, and NYCFC is more or less matching it.

It’s impossible to say with certainty whether Pirlo could have made as much elsewhere in the market. Although there were a few rumors, it’s unknown whether offers were made, and if they were, at what level. At least in theory, one could argue that other European clubs would have offered less. But if NYCFC did pay a premium, that’s part and parcel of luring an elite player to a nascent league.

In any case, Pirlo’s value to NYCFC and MLS is unrelated to his value to anyone else.

Moreover, Pirlo’s salary compares reasonably to MLS’s other recent deals with star players from abroad. According to various reports, Kaka is earning $7.17 million; Giovinco, $7 million; Gerrard, approximately $6 million; Lampard and David Villa, also about $6 million. Among this group, Pirlo was arguably playing at a higher level than any of the others at the time they signed their respective deals, when you consider the team for which he was playing and the quality and consistency of his performances. As such, the Pirlo contract does not unreasonably stretch the Designated Player market.

Basically, either all of these contracts are outrageous or they’re a reflection of MLS’s economics and the forces of the market. If you’re unsure, it really should be fairly easy to give the benefit of the doubt to a league whose business has been marked by conservatism for 20 years.

Maybe this is all meaningless if you’re convinced that Pirlo is essentially washed up. There’s an argument that he’s slowed down considerably, and the wheels are bound to fall off any day now.

But Pirlo doesn’t really run. He’s famous for imposing his influence with efficient movement guided by intelligence and instinct. It’s almost a magic trick. In the first leg of the Champions League semi-finals against Real Madrid in May, Pirlo covered more ground than every player but one (his notoriously tenacious teammate Arturo Vidal), a revelation that left even long-time observers amazed. But this performance didn’t really stand out in any significant way from his body of work over the course of the season. It was just vintage Pirlo.

Let’s just take a quick snapshot of the last four seasons. In 2011-12, 2012-13, and 2013-14, Juventus won Serie A and Pirlo won Serie A’s player of the year award. In the recently completed season, Juventus won Serie A yet again, and advanced all the way to the UEFA Champions League final, with Pirlo still playing the role of l’architetto. It should be emphasized that the UCL final was just 30 days prior to the NYCFC announcement.

It’s difficult to imagine him struggling against lesser competition just a month later. Yes, MLS is a physically demanding league. But Serie A is not exactly a spa treatment.

Pirlo will be fine. And even if he’s not the perfect fit for NYCFC’s midfield, he makes it significantly better. Not to mention, this is a player with the rare ability to decide a game with just one inspired pass or one swerving free kick.

It seems for some fans a star player is a star player…right up to the point that he actually wants to come to Major League Soccer, because then there must be something wrong with him. Maybe in a few cases, but not this one. In sports cliché-speak, Pirlo’s Pirlo.

Ultimately, this move was a no-brainer.

Ted Philipakos is a professor of sports marketing at New York University’s Tisch Institute for Sports Management, Media, and Business. He is the author of On Level Terms: 10 Legal Battles That Tested and Shaped Soccer in the Modern Era. This is his first article for American Soccer Now.