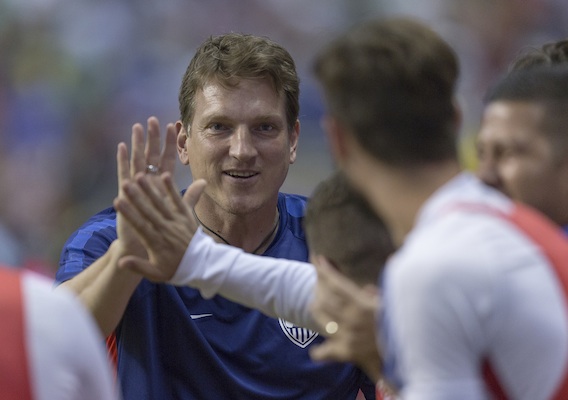 Andi Herzog Discusses His U-23 Team and Mexico

Andi Herzog's U.S. U-23 men's national team faces Mexico's under-23 team tonight in Carson, Calif., and the head coach spoke with ASN about his preparations and plans for Olympic qualifying.
BY Brian Sciaretta Posted
April 22, 2015
11:05 AM

AFTER RUNNING HIS FIRST CAMP as head coach of the United States U-23 team last month, Andi Herzog will now face a major challenge when his squad takes on Mexico tonight at the StubHub Center in Carson, Calif. It will be the most important test in the team's run-up to the CONCACAF Olympic qualifying tournament in October.

The Olympic team is particularly challenging for the United States given that at this age, many players are beginning to break into the first teams at their respective clubs. While the American U-20 team consists of few regular club-level starters, most of the U-23-eleigible players are now key contributors at the club level.

This presents a challenge in that clubs are never obligated to release players for youth national team games even if the games fall within FIFA international windows. With so many U-23 players—including Matt Polster of the Chicago Fire and Khiry Shelton of New York City FC—earning minutes, Herzog will face obstacles as he tries to assemble his best squad. That said, U.S. Soccer expressed that it is very happy with the cooperation it has received from MLS to date.

ASN spoke with Herzog about the state of his team ahead of the Mexico match. This interview was gently edited.

BRIAN SCIARETTA FOR ASN: This is your second camp—how confident are you with where the team stands right now?

SCIARETTA: There are a bunch of players on this roster who are not getting first-team minutes. Does this concern you?

HERZOG: Of course it would be much better if everyone on my team was already starting in MLS or in another first team. At this age, they should already start. But the only thing I can tell the players is that they have to improve and show in training that they’re better than their teammates. In the end it is the decision of the coaches and the club teams. I can only expect from my players to work has hard as possible and fight for the starting spots on their teams. Of course it would be better if they had more playing time with their clubs and not just playing time here with the national team.

SCIARETTA: Do you have an idea as to the core of your team or is it a situation right now where things could change very quickly if several young players begin to do well this season? Does the fact that Olympic qualifying is so close limit your ability to try new players?

HERZOG: It’s a big pool and there already are a number of players on the full national team and a few players on the U-20 national team going to the World Cup in New Zealand. We had a few players in Bosnia that are here again. Finally there are other players in MLS whose club teams didn’t release them. So we have to wait until September or October to talk about the final roster. I have to get good results to give the players an idea of what we want to get out of them and our philosophy of how we play. In a few months we will see what team we can bring to the Olympic qualifiers.

SCIARETTA: Has it been a struggle to get players released for camps?

HERZOG: It’s not easy but I was expecting it. Overall, I think most of the MLS clubs support me right now. It’s difficult because they want to have the best team and they are league games too. Overall it’s not an easy situation for me, for the players, or for the coaches of the club teams. We have to have a good communication between us to make the best out of the situation. Right now it’s difficult:Wwe have MLS, we have the national team, we have the Olympic team, and the U-20 team. So I have four groups fighting for my roster. [Laughs.] But that is what I was expecting and I am not scared. I think we have a good group. But honestly, it could be a completely different group at qualification. The players right now have to show me that they are playing really good soccer right away against Mexico. Then they have a real good chance to be part of us in the future.

SCIARETTA: Are you envisioning any scenario in the future where John Brooks, DeAndre Yedlin, or players who are deeply entrenched with the full national team could be part of your team for qualifying?

HERZOG: We have to be prepared for both situations. It would be great to get them with us but on the other hand, I’m not able to be 100% sure that they will be able to come to us. I have to find the best team available and see what goes on in the future.

SCIARETTA: How much does it affect you that the fact that the second half of Olympic qualifying in CONCACAF falls on a FIFA international date? Does that change the way you are going to plan for the tournament and put together your roster?

HERZOG: Right now there are still a couple of months ahead of us but overall we have to be really smart. Hopefully it will mean we can get our best players released at least for the second half.

SCIARETTA: Could it be that a few players miss the first half of the Olympic qualifying tournament but are available for the second part during the FIFA window?

HERZOG: We’ll see. Maybe we’ll talk about four, five players but it is still a few months away and what is going on right now is that I’m making a bunch of decisions to find the best team available.

SCIARETTA: How difficult has the timing of the Olympic qualifying tournament for you in regards to the U-20 World Cup? There might be a bunch of players at that level who can help your team but you won’t have them until after the World Cup in June.

HERZOG: On one side it’s a limited time but on the other side I’ve already spoken with Tab Ramos and Jurgen Klinsmann and we made the decision that the U-20 World Cup has priority because it’s a World Cup. But for sure, it’s better afterward if I get a bunch of players to get good experience at the highest level. Maybe they can benefit from this and I can benefit from this because I’d have a bigger group of quality players and there would be more competition inside the group. That is much better.

SCIARETTA: How closely are you working with Ramos and Klinsmann in putting together these U-23 rosters? Is it a joint effort?

SCIARETTA: How frequently will this team assemble in the months ahead of the Olympic qualifying tournament?

HERZOG: We’ll have the tournament in Toulon and it’s a real tournament. It will be tricky because MLS has a lot of games during this time. So it is going to take communication to get a good group together. We have to find maybe a couple of other players in Europe. We still have a few weeks to go. It’s great quality tournament and it’s huge for us to be a part of it. We have one friendly game in August and we have two games in September during the FIFA international window. They will be in Europe and will be the last games before Olympic qualifying in October. So there’s a lot of game in front of us and that’s good for me and the players as well.

SCIARETTA: Your selection of Sam Strong caught a lot of people by surprise How did you discover him and decide to bring him into this camp?

SCIARETTA: Have any leaders emerged on this team—players who you think can be a big part of the team moving forward?

HERZOG: Every coach has his ideas and who are very important players. Shane O’Neill is big for us and he played very well the last two games so hopefully he will get starting time in Colorado as soon as possible. We have a couple of other players as well. Jordan Morris had a great week last week against Mexico and we hope he will do it again Wednesday night.