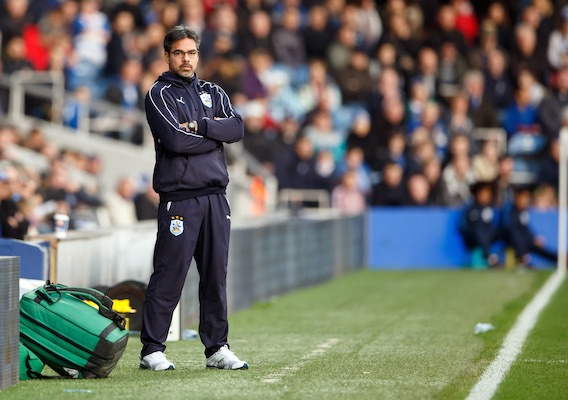 The German-American and former U.S. international never made a huge impact with the U.S. as a player, but he is on a compelling path as head coach for English Championship side Huddersfield Town.
BY Brian Sciaretta Posted
January 05, 2016
10:20 PM

The son of an American serviceman father and a German mother, Wagner would not be at all out of place in the current U.S. national team setup, which saw Jurgen Klinsmann start two players fitting that exact description—Jermaine Jones and Fabian Johnson—in all four games at the 2014 World Cup.

But when a 24-year-old Wagner entered the U.S. national team setup in 1996 under Steve Sampson, he was one of just two—the only other was defender Thomas Dooley, who had recommended him. Sampson, for his part, had never seen Wagner play. He would ultimately give the striker just eight caps for the national team, the last coming in 1998.

“When David came in, it was a weird time,” former U.S. mainstay Eric Wynalda said. “Obviously Sampson was in charge. David didn't get a fair shake. He really didn't. It was a tricky time for him. He was a good player, very mobile. We had some good interactions, and I enjoyed hanging out with him. He's just a great guy. He was very serious, and I think he was kind of holding back. I think he was a little more reserved than I think he really is.

“It's kind of funny because I don't think we were ever introduced to the real David Wagner. We got the other version of a guy who didn't know what the hell was going on or if this was going to work out for him.”

Plenty has worked out for him since.

On Nov. 4, after five years of assisting his good friend Jurgen Klopp at Borussia Dortmund, Wagner was named the manager of English Championship side Huddersfield Town. The 44-year-old thereby became not only the first non-British coach in the club’s 107-year history, but also the first-ever American coach of a professional English team.

Huddersfield, one of the best clubs in England in the 1920s, fell on the decline following World War II, making its most recent top-flight appearance in in 1972. When Wagner arrived this past fall, he found the West Yorkshire side sitting just above the Championship’s relegation zone.

His unlikely appointment has, at least for now, reversed the club’s fortunes: After impressive results over the holiday season, Huddersfield is suddenly pushing midtable.

“It’s very exciting times,” Wagner told American Soccer Now from England. “It’s a lot of work and something completely new for me. For example, in England they have much more manpower and use a lot more time to analyze your opponents and analyze your own game. I was also a lot more surprised about the character of the English players. It’s a very positive character. They always like to work if they are on the pitch. I am a little surprised that they are not so often on the pitch [as] I thought. …

“A lot of things we do are completely new for the people here in England. In the end, I felt it gave me the chance to open my mind to get a new view and a new football culture. I think, in Germany, I knew nearly everything, so there would be no surprise for me in Germany. I am completely satisfied with my decisions.”

Following his retirement as a player in 2005—closing a career that had included time with Eintracht Frankfurt, Mainz, and 1997 UEFA Cup-winning Schalke—Wagner was not immediately inclined to coach. He enrolled in a university to study sports science and biology. (“I was always interested in the past, what the head coaches would do with us, but I tried to build up a new background for myself,” he said.) But only after finishing his studies did he finally feel compelled to begin a coaching career. Fortunately for him, his connections gave him a golden opportunity to work under Klopp, a former Mainz teammate, for his first gig.

Wagner’s official title: Dortmund’s U-23 coach, a position in which he guided U.S. youth and occasional senior national team players Terrence Boyd and Joe Gyau. But Wagner also worked extensively with Klopp on coaching matters throughout the organization—which grew to be one of the best teams in the world during this time. Wagner’s role within the powerful club was a key selling point when Huddersfield’s opening arose.

Klopp’s tutelage, like his friendship, has been immense. At Klopp’s wedding, Wagner was his best man. In turn, Klopp served as the godfather to Wagner’s youngest daughter. And when Klopp moved on from Dortmund and took the Liverpool job, he wanted Wagner to come with him. Wagner, instead, decided to finally step out on his own.

“It doesn't surprise me, because you need to get a chance to show what you can do,” said Dooley, now the coach of the Philippines national team. “I can see him as a good coach when you're with someone like Klopp, who is an unbelievable, great guy. Now you can imagine a guy like David, who is a part of it and can learn and watch—also with being very, very close friends with the coach, you discuss a lot. It's a huge advantage, and he's putting that into his own perspective.”

Mentor and mentee have similarly ambitious goals these days. Klopp has been very clear that he wants to help Liverpool return to Premier League contention; Wagner, meanwhile, is helping lay a foundation at Huddersfield that he hopes will bring about stability—and possibly even a chance to push for top-flight promotion after nearly 45 years in the lower leagues.

"On the other side, it’s one of the smaller cities in the Championship. But they are very innovative, very open-minded to go in new ways. This is long-term in what we are trying to build up. Hopefully with this new way and new ideas, we can make a surprise in the future.”

While the U.S. national team has generally progressed over the past three decades, Wagner’s period with the team was perhaps the darkest during that span, as Sampson gradually lost control of the squad and the U.S. limped to a last-place finish in France in 1998. Wagner could be forgiven for trying to forget those days, but instead he looks back on his time representing the United States with pride. “It’s a part of me and a part of my life,” he said.

Now an analyst for Fox Soccer and Sirius XM, Wynalda had been part of the fairly strong U.S. forward corps, along with Brian McBride, Earnie Stewart, and Joe-Max Moore, that Wagner once was trying to break into. Wynalda, who until 2008 was the United States’ all-time leading scorer, has himself tried his hand at coaching, leading amateur side Cal FC on a Cinderella run to the fourth round of the 2012 U.S. Open Cup.

In discussing Wagner’s possible path from here, Wynalda pointed to his onetime teammate’s ability to handle both the pressure and the politics of a huge club like Dortmund. He pointed also to the impact Wagner already has made at Huddersfield.

But Wynalda’s belief in Wagner’s potential as a coach, in truth, had come much earlier. During one postgame dinner after the United States had defeated El Salvador, Wynalda recalled, the two spoke at length about soccer in the CONCACAF region, with Wagner asking question after question. Long before his sports-science studies, Wynalda saw, Wagner already was a highly dedicated student of the sport.

“He looks at the game in the kind of way where, even when we played together very briefly, it was very clear this guy was going to take the managerial route,” Wynalda said. “Some guys you just know. If anything, he was just a big sponge and wanted to learn and understand everything about his surroundings. The real leaders are the ones that never stop learning. He is the kind of guy that will fall into that category.

“In such a very short span of time of playing with David, my impression of him was an extremely positive one. I think with the path that he is on right now under the tutelage of someone like Klopp, the experience he has had, the players that he has worked with, he's already in a position where he might find himself landing a really big job in the near future.”

And Wynalda, in spite of Wagner’s frustratingly limited playing experience with the program, had a very particular “really big job” in mind.

“I'm rooting for him,” Wynalda said of Wagner. “I want him to be successful because we spent all this time looking for a German to be the new visionary of what we’re trying to do at U.S. Soccer through Jurgen Klinsmann. I would love to see U.S. Soccer entertain the idea of someone like David. But he's going to have to earn his stripes, and that is why I am a big advocate of him continuing on with this path and learning his trade.

“He might end up coming full-circle and coming back to us as the manager of the U.S. national team someday. I don't feel like I am going out on a limb there. I think he would be great.”