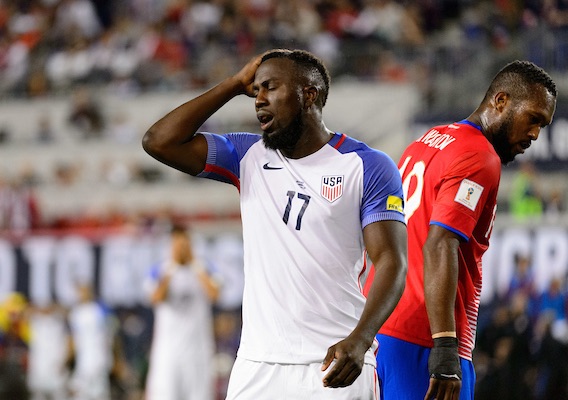 The United States men's national team forward hasn't looked himself in recent weeks. Franco Panizo takes a look at what ails the Toronto FC star and wonders how it's altering his play.
BY Franco Panizo Posted
November 08, 2017
4:25 PM

The aftermath of the U.S. men’s national team’s World Cup Qualifying debacle has likely not been easy for anyone involved, but one person who seems to be taking it harder than most is Jozy Altidore.

Ever since the U.S. embarrassingly missed out on the World Cup in last month’s loss in Trinidad & Tobago, Altidore has looked beyond frustrated. No, it is not just his involvement in this past weekend’s showdown and halftime fracas with the New York Red Bulls, but rather the sum of several moments that have demonstrated that he is not playing with a clear head these days.

It started with his reaction to scoring against Atlanta United on Oct. 22. That day, Atlanta fans booed Altidore and Toronto FC teammate Michael Bradley loudly every time the veteran duo touched the ball. Altidore responded with an "I can’t hear you," celebration after scoring in the second half.


A week later, Altidore spoke out about being jeered by fans of his former club at Red Bull Arena during the first leg of Toronto and New York’s Eastern Conference Semifinals series. The star striker went on to say that it was not the boobirds from the thousands of Red Bulls that perturbed him but rather comments made by one fan that criticized Altidore’s patriotism.

Fast-forward to this past Sunday when Altidore found himself in some heated confrontations on the field, first with Tyler Adams and then with Sacha Kljestan. Altdore’s run-in with Kljestan carried over into the tunnel at halftime, as the former U.S. teammates skirmished to spark a large fracas—even head coaches Greg Vanney and Jesse Marsch were involved—between the two clubs that ended with both Altidore and Kljestan getting ejected from the match.

If that was not enough, Altidore then proceeded to author a tweet directed at Kljestan. The New York midfielder told media postgame that Altidore came up to him and shoved him into a wall to start the intermission melee, an account that irked Altidore enough to publish and then delete a possibly playful but more than likely trash-talking tweet.

It must be said that Altidore has continued to perform on the field during this stretch, contributing goals and solid overall play, but all these moments together still paint a picture of a player who seems frustrated or, at best, unfocused.

This is not the first time that Altidore has allowed his emotions get the best of him. The forward also got sent off twice in a matter of months in 2015 for abusive language directed at referees. The first came while playing for the U.S. against Switzerland in a friendly, and the second while on the bench for Toronto FC in a road game vs. the Red Bulls that followed a pair of disappointing defeats at the international level.

[VIDEO] Toronto FC's Jozy Altidore sent off for what appeared to be language in United States' draw w/Switzerland. http://t.co/DbeVQYNVs4

While Toronto FC's Giovinco scored a solo goal [video] Altidore got sent off from the bench http://t.co/KM2cCs92TB pic.twitter.com/ypur0ShJhx

While there is still a chance for Altidore’s most recent red card against New York to be rescinded, the forward likely knows that he needs to get back to being solely concentrated on what happens inside the white lines in order to help Toronto in its quest to become the first MLS side to win a treble. Doing that to help the team win its first MLS Cup will not be easy, though, as Altidore now has a large target on his back that both opposing fans and players will likely try and hit via pointed insults or physical play in order to elicit a reaction.

Having turned 28 on Monday, Altidore should be handling these heckles and criticism from the stands better. He has long been an international player that has played in hostile environments like Mexico and Honduras—he understands and speaks Spanish—and knows full well how fickle and bitter fans can be when things do not go well.

It is true that the World Cup Qualifying failure does not fall strictly on his shoulders, but he needs to do a better job of blocking the outside noise. If he needs an example for how to do so, he should look no further than Bradley, the U.S. captain who has also been booed, criticized, and insulted plenty since the Americans' unforgettable letdown in the Caribbean in October.

“The Biggest Losers” banner with a photo of Bradley and Altidore. Amazing. pic.twitter.com/sB0c29Rccs

Unraveling at this late point in the MLS campaign does Altidore no good and Toronto FC a disservice. He might be frustrated with how things are playing out as of late, but he needs to help his cause, not hurt it. Altidore might miss out on another big opportunity otherwise, and things will only be even more frustrating if that happens.