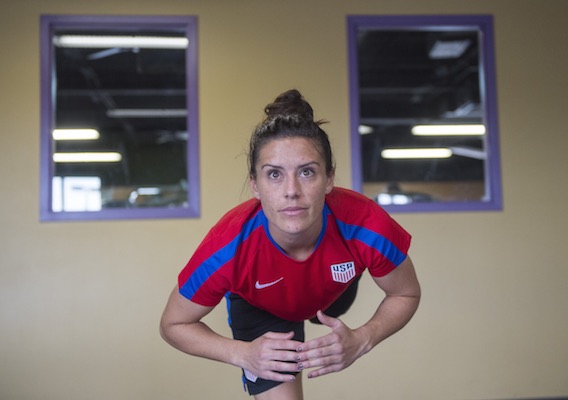 Ali Krieger to ASN: "I Want to Play in Olympic Games"

SOME SOCCER OBSERVERS might assume a player as experienced as Ali Krieger would view the upcoming Rio Olympic Games as just another tournament.

After all, the United States women’s national team defender has represented her country on the international stage for nearly a decade, starred in two World Cup (starting all 13 matches in those tournaments), and helped lead the Americans to the ultimate prize in 2015.

But despite playing in two World Cup finals, winning a UEFA Champions League title, and a Bundesliga championship, there is still one major accomplishment missing from Krieger’s resume—an Olympic gold medal.

Debuting for the U.S. women in 2008, Krieger narrowly missed the official Beijing Olympic roster that year, instead being named an alternate. Then, after establishing herself as a mainstay on the American backline in a standout World Cup performance in 2011, Krieger tore her ACL during qualifying for the 2012 London Olympics and missed that tournament as well.

Speaking to American Soccer Now ahead of the U.S.’ friendly against Colombia this Wednesday (7pm ET, Fox Sports 1), Krieger said those experiences have made her more determined than ever to pursue her Olympic dream.

“Suffering that injury just motivated me even more to want to get back," Krieger said. "That’s why playing in the [2015] World Cup for me was a success. I was motivated and determined to get back to where I was and even came back stronger.

“The World Cup is over, the gold medal is received, and now it’s, ‘Focus on the Olympics.’ I gained experience in the World Cup and this is a different tournament, but it’s the same mentality playing against the best teams in the world,” she later added. “No team has ever won a World Cup and Olympics back-to-back, so I think this is a great opportunity for us. I’m so happy to be a part of that experience and, hopefully, that success.”

Coming off its 2015 World Cup title, many pundits assumed the U.S. squad would simply recharge and then move on to Olympic qualifying. However, a series of retirements, pregnancies, and injuries have forced changes to the team quicker than expected.

Krieger, an established 31-year-old veteran with 85 caps, now finds herself in a new role: mentoring an up-and-coming generation of youngsters.

“A lot of the young girls having to mold into the team and jump into the squad—they’re under a lot of pressure,” the Virginia native observed. “They have taken this challenge and have done so well with it and succeeded in the roles they’ve been asked to play. As an older player, I try and help in those situations and try and integrate the young kids and support them because I think that’s important and that’s what I looked for when I was younger.”

With many of squad’s veterans stepping away from the game in the last few months, Krieger argued this process is more important than ever.

“We need to make sure we’re producing our youth and we’re integrating them as early as possible. Because once the Abby’s of the world, the Christie Rampone’s, the Shannon Boxx’s of the world are out, that leadership is really, really important to still have for the young kids,” added the Penn State alumna. “I was lucky enough to have their leadership when I was young. I’m just hoping to take that position and help mentor these younger kids.

“It’s important to have the experienced players and that knowledge in order to kind of hold their hands through this process. But it’s been great so far and they’re fast learners. They’re willing to learn, they’re willing to work, they’re determined and focused and ambitious and that’s what we need. That’s the mentality we have in the group.”

The Americans head into two friendlies against Colombia after winning March’s inaugural SheBelieves Cup. Krieger said the level of competition provided crucial experience for the U.S. as it prepares for the Olympics.

“It was a great tournament for us because we always want to play against the best teams in the world," Krieger said, "so having a tournament like [the SheBelieves Cup] was amazing. I wish we could play against France and Germany every friendly that we play. You’re playing against the second, third, and fifth best [teams] in the world. It was a great chance for some of our younger players to have that challenge and gain experience and gain confidence.”

The SheBelieves Cup took the place of the Algarve Cup on the U.S.’ schedule—a tournament held each year in Portugal. Despite the fact the U.S. has made the trip to the Iberian Peninsula each spring going back to 1997, Krieger said she is happy the Americans stayed home this year.

“Obviously, it’s such beautiful weather there, being on the beach, it’s a dream to be over there and have that tournament. But I was actually happy [not to go this year] because we’ve been doing so much traveling. It’s so much fun to have a tournament here that we can call our own and bring some of the best teams in the world and have the opportunity to play them on home soil.”

In the last game of the SheBelieves Cup, the U.S. faced Germany with the championship on the line. Krieger started the match and helped the U.S. to a narrow 2-1 win.

Having played in Germany for five seasons before coming home to the National Women’s Soccer League, Krieger said every opportunity to play against the German national team is special.

“I love Germany, I still call it my second home. I have an itch to even go back [at some point],” said Krieger. “I have five or six old teammates that I used to play with at Frankfurt on the German national team. I was able to see them and connect with them and it just brings back such great memories for me.

“I’m able to speak German with them and see how they’re doing. I really, really enjoy playing against them. I have a soft spot in my heart for them, and the team, and the culture.”

At the club level, Krieger plays for the Washington Spirit, which made the semifinals of the National Women’s Soccer League playoffs in 2015. She said the NWSL, entering its fourth season—a record for top flight women’s professional soccer in America—will be especially important in helping keep the national team players sharp before the Olympics in August.

With only four months to go until Rio, Krieger knows time is short for the Americans to make some final adjustments and fine tune their preparation.

“You can never get complacent. It’s a bit of an evaluation period right now. In the next few months, it’s going to be solidifying the personnel that’s going to be playing in these games.”

“Ironing out the details, figuring out the personnel—we can have so many different lineups—we have so much confidence within the squad,” Krieger continued. “Any players you put out there are going to be successful and do their job well.”