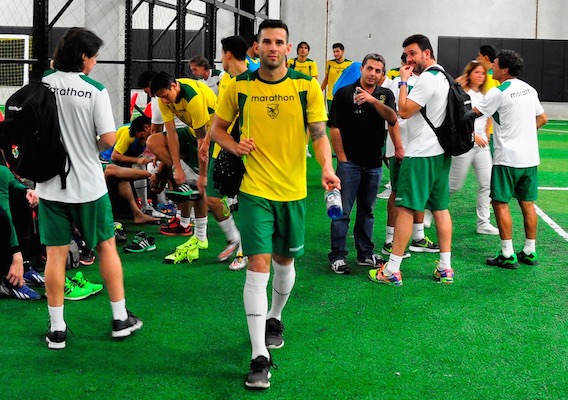 The 28-year Miami native is a Bolivian-American who will likely suit up against the U.S. national team Saturday night in Kansas City. Kan. ASN's Brian Sciaretta spoke to the midfielder about his homecoming.
BY Brian Sciaretta Posted
May 27, 2016
4:30 PM

FOR ALEJANDRO MELEAN, the opportunity on Saturday night to face off against the United States is going to be a special experience. While he plays for Bolivia, the Miami native has an all-American personality and strong love for his birth country—but has never been able to make a name for himself here.

Copa America Centenario could change all of that.

“I think I can finally be seen,” Melean told American Soccer Now from Bolivia’s national team camp. “I've been playing on U.S. soil most of my life but I don't think I've ever really been seen. This is an opportunity for that to happen. I've got to take advantage of that.”

There are plenty of reasons for Melean, 28, to feel confident these days. Over the years he has emerged as one of top box-to-box midfielders (as well as an occasional central defender) with Bolivian side Oriente Petrolero, his club since 2011. He has been a regular in the Copa Libertadores, South America’s top international competition, and so far has earned 11 caps with the Bolivia national team, playing in both friendlies and World Cup qualifiers.

Now he is returning home to play in his first major international tournament.

Growing up in South Florida, Melean was a good prospect but not considered elite. Alejandro Bedoya, a contemporary of Melean's, was one of the top players in the region, and it was Bedoya who was widely recruited and ended up being a Hermann Trophy finalist at Boston College.

Melean, on the other hand, went to the College of Holy Cross in Worcester which is not even close to the top echelon of NCAA teams. His coach at the time, Elvis Comrie, recalled traveling down to Florida on recruiting trips and seeing Melean as a diamond in the rough on a West Kendall club team loaded with top talent.

"He was the ugly duckling of the group,” Comrie said of recruiting Melean. “He wasn't flashy. He was skinny, tall. But he wasn't the best player on that team. At Holy Cross, we weren't a sexy school that top players wanted to go to. I had to find players that had great academic profiles that could get in on their own merit. I also had to find players that presented something I could work with. You had to have a good eye. But of all the players that appealed to me, it was Alejandro. When I called his coach about him, he said, 'Of all the coaches who called me about my players, you're the only one who asked about Alejandro. But trust me, he's a kid that has a tremendous upside.'"

He did well at Holy Cross, earning all-Patriot League honors twice in his four years. Still, the Crusaders never made the NCAA tournament and that hurt his stock as he tried to transition to the professional ranks.

“It was a little disappointing but I think it was because my college was underrated,” Melean recalled. “I remember at the time there was a publication that ranked college players, from A to F, as to whether they would make it as a professional. I think I got a C- [laughter]. In my case, I took that and used it as motivation and didn't let it get me down.”

Unable to even secure MLS trials, Melean made a deal with his father that he was going to take a year and try to find a club. Otherwise, he would return to school. Both of his parents were from Bolivia and Melean spent time there during the summers growing up. His father had contacts at Blooming which was a top team in the Bolivian League.

Unfortunately for Melean, he arrived too late in the season to be signed by Blooming but instead trained with the club for months as it went on to win the title. After the season, Blooming made an offer to Melean for a five-year deal on a miniscule amount of less than $500 per month. The offer was quickly rejected.

Instead, Melean signed for the tiny club of La Paz FC in 2010, 11 months after his deal with his father. Fortunately, he quickly moved onto Oriente Petrolero in 2011. It paid off, and in just his first year he got a chance to play in the Copa Libertadores—including appearances in wins over Brazil’s Grêmio and Peru's León de Huánuco.

His strong play for Oriente lead to a call-up from Bolivia’s national team in 2011. With no interest from U.S. Soccer, Melean accepted.

Melean is interested in playing in Major League Soccer and has already rejected a few offers from MLS teams because they would have required him to take a pay cut.

A strong performance at the heavily scouted Copa could lead to better offers from MLS. While content in Bolivia, a return home with his family, including a daughter born April, is appealing to Melean.

“I'm actually very happy because I've made a name for myself here in Bolivia—which has been very difficult after beginning with La Paz, one of the smallest clubs in the country,” Melean said. “At first I was earning very little. Little by little, I've managed my contracts well to be earning a lot. I've had offers from teams in the States but it was offering less than what I've been making.

“If I get offered the same amount of money, I would definitely choose the States over Bolivia,” he continued. “Especially because of the conditions [in which] we train. Professional teams in the United States are much more developed than teams here.”

Copa America Centenario will provide a stern test for Bolivia which was drawn into a group with Argentina, Chile, and Panama. Currently in ninth place in South American World Cup qualifying, Melean is quick to point out that the team is optimistic and he cites last year’s Copa America, where Bolivia upset Ecuador and drew Mexico to advance out of its group.

The second game against Chile on June 10 will be of special meaning for Melean as the game will take place in Foxborough, Mass. Melean will supply college friends with a ton of tickets.

“There is a lot of optimism,” Melean said.  “We want to improve on our performance last year at the Copa. We are definitely a team that can surprise people. We can pull off upsets.”

Of course before Copa starts, there is a friendly against the United States on Saturday night in Kansas City. It’s a game that carries meaning for Melean on many levels.

First is due to his rivalry with Bedoya which will now continue onto its third level.

And of course, playing against the United States will be special because of his affinity for the country and its national team.

“During the last World Cup, I actually posted a photo of me wearing U.S. jersey with the caption, 'One of the two teams I will always support,'” he added. “Since Bolivia wasn't in the World Cup, I was definitely going for the USA. That's the best part for me, getting to play at home and that I get to play a friendly match against the United States. It's going to be very exciting for me.

"I have to see if they will let me sing both anthems. I was hoping for a chance for like this since my first Bolivian call-up. Now that it's happening ahead of Copa America, on U.S. soil, it's amazing.”