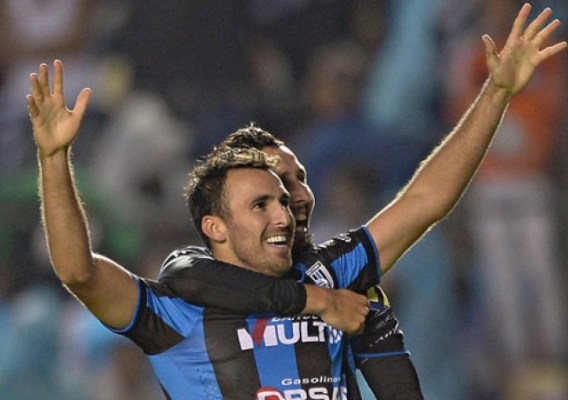 At 33, Jonathan Bornstein still has a lot he wants to accomplish in the game of soccer. With his move to Israel announced last week, Torrance, California sets forth on a fulfilling a childhood goal of playing in a major European competition.

BY Brian Sciaretta Posted
June 12, 2018
12:00 PM
FOLLOWING THE United States national team’s failure to qualify for the 2018 World Cup in Russia, most of the attention in American soccer has deservedly fallen on the promising next generation of players who will be picking up the pieces of the mess and moving forward.

And that makes sense too. There is plenty of reason to be excited over a group that includes Christian Pulisic, Weston McKennie, Tyler Adams, Zack Steffen and many others.

Jonathan Bonstein is not one of this group. The left back from Torrance, California realizes that as he enters into his mid-thirties that time is no longer on his side. But that doesn’t mean he is winding down. In fact, it’s just the opposite.

After leaving MLS in 2011 for Mexico, Bornstein was recently affected by a change of rules in Mexico that now count him as a foreigner due to his American birth, despite him holding a Mexican passport. At this point, many would have expected him to look for a return to MLS. While he considered that, he instead accepted an offer to move to Israel to play for Maccabi Netanya.

“I am hoping to play for quite a few more years,” Bornstein told ASN from Mexico. “But at 33 years old I have to take advantage of that opportunity when I can.”

Bornstein had always entertained the idea of playing in Israel and in 2007 went to Maccabi Tel Aviv to consider a potential move. Due to his Jewish background, there is an opportunity for him to play there and not count as a foreign player.

And Maccabi Netanya makes sense too as it is a club making a strong rebound after a downward spiral saw it relegated in 2016. In 2016/17 the club earned a quick promotion back to the top flight, Ligat ha'Al. Then most recently in 2017/18, the club finished in a surprising fifth place.

So now at an age when American players of his age consider a return home to the U.S., Bornstein is now moving abroad. The reason is that he wants to take a chance at playing in European competitions and understands that this might be his last shot.

“I think it's an interesting league because they do get to play in the Champions League and the Europa,” Bornstein explained. “I want to help Maccabi Netanya get into one of those tournaments - for the club, for the players, it's always on a big stage in those types of tournaments. Those are the best games to watch. To have the opportunity to maybe play in those tournaments would be a dream come true and it is one of the reasons why I am making the move over there.”

Leaving Queretaro will be tough for Bornstein, for both soccer reasons and personal reasons. On the field, he has been successful with the club. After signing for Tigres, Bornstein joined Queretaro in 2014 at first on loan, and then on a permanent deal.

Over the years, he became a regular and on May 24, 2015, he scored the biggest goal in club history when his second half strike against Pachuca sent the club to its first ever Liga MX final.

Professionally, it was also hard. His daughters were settled. His wife had a nice job in a law firm and he also owned a successful and growing automotive company, Bornstein Automotive, that he founded due to his love of cars.

As he heads to Israel, Bornstein is knows that eventually he will have to decide what he wants to do after his playing career. He has his business in Mexico but would consider operating it in the United States to give his daughters access to the American education system. He is also considering getting his coaching licenses.

Before that, however, he also wants to eventually have a final stint in MLS. Following a collegiate career at UCLA, he played for now defunct Chivas USA from 2006-2010 and won the league’s rookie of the year. While he has been removed from the league for seven years, he has been following it and admiring its growth – especially compared with Mexico.

“Playing in the league for a number of years helped me grow as a player,” Bornstein recalled. “I've watched the league grow while I was in Mexico and the league has grown into something that is very, very big internationally. I would like to one day go back and play there. I just think at the moment it wasn't the right decision.”

“This past year we saw the gap between MLS and Liga MX close quite a bit,” he added. “My team played in the Champions League three years ago and the gap was much bigger. The semifinals had four Mexican teams when in the quarterfinals had four MLS teams. The timing hurts MLS because the tournament is in preseason. This year MLS put more focus on it and came into preseason earlier. If you want to compete, that is what you have to do. They finally took note of why they were losing and took remedies to fix it. In terms of level of play, the leagues are very similar. On any given day, any one team can beat another. I hope it stays that way. I think it’s better for both countries to have healthy competition.”

But Bornstein’s ambitious quest to play in high-profile European competitions has delayed his return to the United States and his strong ambition, whether it be at the club levels or entrepreneurial endeavors, also remains at internationally.

As a player with 38 caps, Bornstein is proud of his career with the U.S. team. While his career with the team had ups and downs, there were plenty of impressive highlights while he played a left back position that has historically been tough for the team to fill. He was part of the 2007 Gold Cup win, the 2009 Confederations Cup that advanced to the final, the 2010 World Cup qualifying campaign where the U.S. team won the Hexagonal for the first time, and most importantly the 2010 World Cup where the U.S. team won its group for the first time.

While he has not played for the U.S. team since a tough 4-2 loss to Mexico in the 2011 Gold Cup final when he was 26, he still does not give up hope of returning to the U.S. team. Above it all, however, he takes pride in the team and watched in disappointment at the qualifying downfall last cycle. Whether he ever returns to the team or not, it is something he doesn’t want to see happen again.

“I've been training hard here in Mexico,” Bornstein said. “I've never given up hope on returning to the national team. Circumstances out of my control have been the reasons why I have not been there. I think I've been playing well to get a chance. I am still hoping for a chance and maybe going to Israel and doing really well there will hopefully show whoever the next coach is that I am here if they need me.”

“Watching the national team not qualify for the World Cup and their problems throughout qualifying was tough to watch,” he continued. “We're all disappointed. You see all the pre-World Cup games going on now and it's a lot of fun and it's exciting. To not have that, for our culture and for our country, is disappointing. I don't know where it went wrong, exactly. But this can't be happening again in the future.”