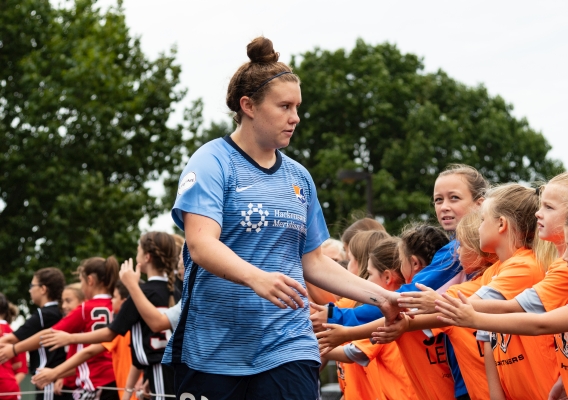 After a difficult stretch following the folding the Boston Breakers and a losing season with Sky Blue, Savannah McCaskill finds herself at a high point after leading Sydney FC to the W-League title this past winter. Now the South Carolina native will hope to boost an improved Sky Blue in the NWSL and make a return to the USWNT.
BY John Halloran Posted
March 28, 2019
6:45 AM
SHORTLY BEFORE the 2019 W-League Grand Final, Savannah McCaskill learned she’d be receiving an unexpected boost—her parents would be making the 9,000-mile journey to Australia for the big game.

Texting with her dad a few days after knocking out Brisbane Roar in the semifinals, he informed Savannah of the trip by simply writing, “See you in two days.”

It takes nearly 24 hours to get to Sydney from McCaskill’s home state of South Carolina, meaning her parents were only on the ground in Australia for roughly the same length of time they spent traveling to and from the match.

“They’re amazing,” McCaskill told American Soccer Now. “They have missed very few of my games and are just always there for support.”

In the match, McCaskill put on a dominating performance in front of her parents and everyone else watching. After assisting on Sydney FC’s opening goal, she went on to score two of her own, winning for herself Player of the Match honors and helping lead her team to the title.


The @SydneyWFC Goal of the Season, as voted by you, is Savannah McCaskill's stunning header in the W-League Grand Final.#SydneyIsSkyBlue pic.twitter.com/nFWxKJgAHz

Each winter, a few dozen Americans spend their winters abroad, loaned out to various teams competing in the W-League. And even though this was McCaskill’s first season in Australia, the trip couldn’t have come at a better time.

After leading her team to the 2017 College Cup in her senior season, McCaskill started to receive regular call-ups to the United States women’s national team and earned six caps early in 2018. But then her professional career hit a few bumps.

The Boston Breakers selected McCaskill with the second pick of the 2018 National Women’s Soccer League draft, but shortly thereafter, the team folded. Then Sky Blue acquired her in the dispersal draft, but the team struggled on and off the field last season, winning only one match.

“No one likes to go through a season like we had last year,” she recalled. “I wouldn’t wish that upon anyone. It’s just hard to keep having fun and enjoy what you’re doing. Being able to go to Australia and kind of find that love for the game again and have fun again was really big for me.”

It took McCaskill some time to process the experience of going from the pinnacle of the game in college and on the international level to a rough year in her rookie professional season.

“[Eventually], I was actually able to take it all in and realize what had happened over the past year,” she said. “It was definitely a roller coaster—a lot of highs and a lot of lows, but definitely a learning experience.”

In Australia, McCaskill was able to play on a team with a number of American and Australian internationals, find joy in the game again, and bring her form back to the top level.

“A friend of mine that was going to Sydney FC reached out to me probably about a month before the season over there was going to start and asked me if I would be interested,” McCaskill explained. “I said yes, but then nothing really came of it.

“[Then] I actually got an offer two days before I needed to leave to go out to Australia for Sydney FC. It was kind of a game-time decision, but I’m so glad that I decided to go and hop on a plane and go ahead and go for it because it was so much fun.”

Danielle Colaprico, who also played for Sydney this past winter, clearly remembers the moment McCaskill arrived with the team.

“I’ll never forget, it was the first day she landed in Australia and we were playing 11 v. 11,” recalled Colaprico. “She had just landed, so like most of us took a couple days [to adjust]. But she just landed, steps on the field and says, ‘Yeah, I’m in.”

“We play her the ball wide and she is running at the outside back full speed, megs her, crosses the ball, and we score. Not only did she just get off a 22-hour flight, she just ran at that girl full speed, megged her, got a cross off, and we scored. That’s one thing I’ll just remember. She’s just so creative and it’s pretty amazing to see.”

Now back with Sky Blue, McCaskill is hoping to help her NWSL side find more success and reestablish herself with the U.S. team. She thinks the two can go hand-in-hand.

“I’d love to get back in with the national team at some point. That’s always my goal in the back of my mind,” she said.

“[Sky Blue] being successful is one of those things that can help me. If the players around me are playing well—it’s a lot easier to perform at your best when the whole team is doing well.”

McCaskill owns the type of skill set most players would love to have. She can stretch a backline, hold the ball up, combine with short passes, score, take players on the dribble, and provide service from the flanks.

However, the attacker isn’t complacent. She freely admits that she needs to keep developing her game, find more consistency, and keep “fine-tuning little areas of weakness.”

Despite Sky Blue’s struggles last season, McCaskill also says that everyone on the team has been working hard through this preseason and feels that things at the club are moving in the right direction.

“We’ve seen good, positive change so far. We just hope that continues to carry on throughout the season.”