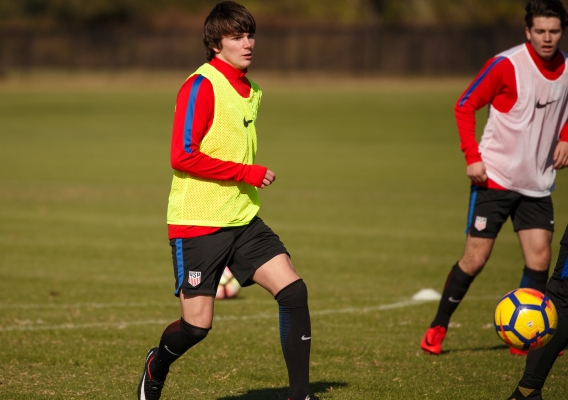 Last week, Taylor Booth completed his long-awaited move to Bayern Munich. ASN's Brian Sciaretta spoke with the Utah native about the move to the big club and his future with the U.S. youth national teams.
BY Brian Sciaretta Posted
February 12, 2019
9:00 AM
THE DECISION over where to start a professional career can be very difficult one for young players. For Americans, there are more options than ever before. Some still opt for college and put off turning professional, some sign domestically, others move abroad to lower level clubs in the hopes of working their way up. Then there are those who make the gutsy decision to sign directly for the biggest clubs in the world.

Tayler Booth, 17, made such a decision when he finalized his contract with Bayern Munich last week. The deal had been in the works for awhile and normally he would have to wait until he turned 18 to move abroad, and that is something Bayern Munich was expecting. But Booth was able to accelerate the deal when he acquired an Italian passport – which allowed him to move abroad at an earlier age.

His Italian heritage actually is on his father’s side (“I know Booth doesn’t sound very Italian,” he joked), with his great grandfather immigrating from Sicily and his name getting changed somewhere along the way. But the process of getting all the paperwork took a year and a half and it was the missing piece on allowing him to move to Munich in 2019.

For the rest of this season, Booth is expected to be part of Bayern Munich’s U-19 team where he will play alongside fellow U.S. U-20 defender Chris Richards. He was recently with Bayern’s U-23 team in Texas for a friendly against FC Dallas but was not able to participate in the game, a 4-0 loss to Dallas, as the team held him out for precautionary reasons over a minor injury.

“I had a bunch of different options with a bunch of teams in a bunch of different countries,” Booth told ASN in Texas. “For me, I always wanted to play in Europe and that was my goal. I went on a few trials in Germany and Germany is super-good for young players, specficially young American players because it is easier to adapt and for paper-work. For me I was interested in that. After the trials, the best option for me was Bayern. I am really happy with that.”

“So far it's been great,” he added. “Everyone on the team has accepted me. For me, I've been living alone since I was 14 years old. The jump to Germany wasn't as much of a change for me in terms of being away from home. Of course there are cultural things that are different but being out of the country for me hasn't been too difficult. I've been studying German for a year. I wouldn't say it's great but it's coming [laughs].”

The trip to Texas was fun for Booth who formally kicked off his time with the German club. As part of an initiation he humorously had to get up in front of the whole team and sing Party in the USA by Miley Cyrus (“I had to,” he stressed). When asked if there would be video of this surfacing, Booth sighed and replied “unfortunately” before laughing.

But things will be getting serious soon for Booth as the U-19 Bundesliga is expected to be a challenge for him and Bayern currently sits in third place in the Southern league. But the important priority right now for the native of Eden, Utah will be getting back into the routine of playing competitive matches on a weekly basis again.

“It's definitely a super-intense league,” Booth said of the U-19 Bundesliga. “All the teams are good and all the players work really hard. That pushes you to become a better player. The league gets a lot of attention and a lot of people are always watching. If you play well there, you'll get a lot of exposure. You can make a name for yourself.”

Growing up in Utah, Booth came from a soccer background. Both his parents played collegiately as his father, Chad, played at Weber State and his mother, Kelli, was a star at Utah State. As he began to blossom as a youth player, Booth was given the opportunity to play for the academy of Real Salt Lake which was based in Arizona. There he began to take his game to another level and earn regular call-ups to higher-level U.S. youth national teams.

At first signing with Real Salt Lake was an option for him by Bayern Munich was something that was simply too tough to turn down. Booth believes, however, that he left Real Salt Lake amicably despite the club’s uncompensated loss (which also came on the heels of losing Richard Ledezma and Sebastian Soto to Europe without compensation).

“I had the option to stay and sign a homegrown deal with Salt Lake,” Booth said. “I definitely thought about it but for the one thing has always been Europe. The good thing is that I give Salt Lake a lot of credit for being so understanding about my decision. It's not easy when they lose good players from their academy and they don't get any compensation for it. I understand that can be frustrating. But they were understanding and wished me the best on the move to Bayern. They understood that was a deal I couldn't turn down. They realized that. I am happy that we kept a good relationship. Hopefully sometime down the road, if I ever come back to MLS, Salt Lake will definitely be my first choice.”

But internationally, Booth is also optimistic that he can begin to climb the ladder again. The past year has been difficult for him due to the pending move to Bayern preventing him from playing regularly but with that now cleared, he believes it won’t be wrong until he is back on track.

Former U.S. U-18 head coach Omid Namazi was Booth’s coach in recent years and is optimistic for Booth’s future both at Bayern and with the United States.

“There is always that question when they make these moves to big clubs whether it's beneficial to their development,” Namazi said. “Are they going to get playing time? Are they going to move along as they should be to eventually get first team minutes to make the jump to the next level? That remains to be be seen. As we've seen with certain players, the big club move hasn't been the answer. But with Taylor, I think he's talented enough to make the jump."

“When I had him in camp, he played both the No. 6. and the No. 8 position and he's comfortable for both,” Namazi continued. “He can be the link up guy - getting ball from defenders and distributing it or he can be the box-to-box midfield. For me, he's as good of a two-way player as there is in our youth national team program. He can do everything. He can shoot. He can pass. He can dribble. He's athletic enough. There really is no weakness in his game. It's just wanting it and having the desire to make the level.”

But the current U-20 team is pretty deep in central midfield as Brandon Servania and Chris Durkin occupy the No. 6 positions and Alex Mendez, Richard Ledezma, and Paxton Pomykal play in the more creative roles. Despite the competition, Booth is pushing for it.

“The U-20 World Cup would be awesome and that is kind of in the back of my mind right now but as a short-term goal I just want to get back on the field and put on full 90-minute matches,” Booth said. “Hopefully I get an opportunity in a camp with the U-20's where I can prove myself and prove I belong on that team. It's been difficult for me over the past year with the U-20s because I haven't been getting matches every weekend. But now that I am going to be playing, I should be getting back to speed quickly. I am definitely going to be looking forward to hopefully making that roster.”

It's definitely a challenging route but with all the paperwork now cleared, Booth sees big things ahead in the near future for both club and country.