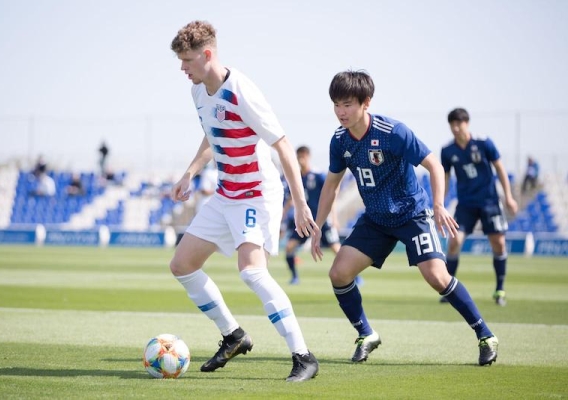 After a strong U-20 camp, Cappis now "waiting on the edge of my seat"

It's never fun for a player to be anxiously waiting for final cuts ahead of a major tournament, but after two goals against France and Japan in March, Hobro midfielder Christian Cappis has boosted his case to be on the United States U-20 World Cup team.

BY Brian Sciaretta Posted
April 03, 2019
12:00 PM
WHEN TAB RAMOS names his U-20 World Cup roster next month, there are going to be some very difficult cuts he has to make. The player pool this cycle is very deep and there are people who would have made the team in any previous cycle, but will have to stay home in 2019.

Christian Cappis, 19, knows he’s on the bubble for the World Cup in Poland. But the good news for the Texan is that he is certainly trending upward. One month ago, he was probably on the outside looking in. But in mid-March, he was invited to the team’s final camp prior to World Cup preparations in Spain and seized the moment.

In a friendly against France, Cappis came into the game with just minutes to go with the United States trailing France 2-1. In stoppage-time, Cappis found the equalizer when he finished a beautiful sequence that began with a beautiful line-breaking pass from Andrew Carleton which found Jonathan Amon on the wing. Amon played to central defender Boubacar Keita, who made a dangerous run into the box. Keita fed Cappis in the middle of the box and Cappis found the back of the net for a 2-2 draw.

Two days later, Cappis earned the start against Japan and after the team’s difficult first half, Cappis was key to an improved second half and found the winner in the 75th minute for a 2-1 win.


Here are the goals from the US U-20 team today in the 2-1 win over Japan. The first was scored by Andrew Carleton & the second was scored by Christian Cappis pic.twitter.com/BK13Lt5Jtj

“I like to say I am confident in going to Poland but so much can happen,” Cappis told American Soccer Now. “There is so much quality within this group that I am kind of waiting on the edge of my seat. The team as a whole is probably deeper than I've ever seen it. I think there were six midfielders at the camp and there are three I can think of off the top of my head that weren't at the camp that could very easily go to the World Cup. There are nine or ten midfielders going for five spots, maybe six. All ten of us could do the job exceptionally well and there is no drop off.”

The U.S. U-20 team was impressed with Cappis and what he brought to the table in Spain. Freiburg’s Alex Mendez, who was named the best payer in November’s CONCACAF Championships particularly noted the fight Cappis displayed.

“Cappis definitely gave a spark to the team when coming onto the field,” Mendez said. “I think he did well with the opportunity given to him and he would be a great help to the team if he is called up because he’s a player that’s willing to do whatever it takes to win.”

On the heels of his strong camp with the U-20 team, Cappis is starting to make strides with his Danish Superliga club, Hobro. In his first game after the international break, Cappis earned his first professional start and went 70 minutes as Hobro played to a 3-3 draw away against Vendsyssel FF to help in its battle to avoid relegation.

Cappis only joined the team in December during the winter break and it has taken a little bit longer for him to break into the first team due to a managerial change early in March as the manager who signed him, Allan Kuhn, was fired and replaced by Peter Sørensen. It took Cappis a few weeks to build his case that he could be an effective starter and the turning point came as Sørensen was following his performances with the U-20 team.

“I don't have a lot of pro experience to my name,” Cappis explained. “So it takes a little bit of time to gain that trust and we are in a relegation fight and every single point matters. It's been difficult these past few weeks but I believe I am starting to break through with the new coach. He's spoken with me and told me he has a lot of confidence in me. He pulled me aside when I got back from Spain and said he was so happy I played so well there.”

The journey that brought Cappis to Denmark began with controversy. Born in the Houston-area, Cappis never played for the Dynamo academy and instead played for the Texans SC which won the 2016/17 US DA U17/18 Championship with Cappis being named Central Conference Player of the Year. Cappis, along with Texan SC and now U.S. U-20 teammate Chris Richards, then found an opportunity to move north and play for the FC Dallas academy.

When the time came to turn professional, he had an offer to sign with FC Dallas – which he wanted to do. But due to the homegrown geographic restrictions in MLS, the Houston Dynamo objected to him signing with Dallas since he is from their area. MLS sided with the Dynamo. When Houston approached Cappis to negotiate a homegrown deal, Cappis rejected.

“I figured that I played for Dallas, I never played for Houston, I should be able to sign for Dallas,” Cappis said. “The Dynamo made a big deal about how I belong in their territory. The league decided I could only play for Houston. Dallas told me they would love to have me but there was nothing they could do. The Dynamo were in contact with me but my thing was growing up in Houston they never showed hardly any interest in me. I thought if they didn't show that much interest in me then, why should I go and become the face of their homegrowns? We told the league we only wanted to play for Dallas in MLS. Otherwise we would go elsewhere.”

Not wanting to play for the Dynamo, Cappis went to Europe for trials. He quickly realized that he needed a place to establish roots so he could grow as player as the trialing with different teams every two weeks wasn’t helping with improvement. The trial at Hobro was successful and Cappis was drawn to the Danish Superliga due to the opportunities it gives young players.

Regarding the quality of play in the Danish Superliga, Cappis is also satisfied. He believes the top teams in the league have high quality throughout the lineup and that all the teams have at least a few really good players. What he also likes is how every team is very different and that the variety of approaches and styles allow all the teams to compete well.

“The Danish league is a good league known for developing young players. It's a place where I will really get minutes,” Cappis said. “We thought this is a good place to start. Since I've come here, it's been a great place to grow as a player. It's been a great move here to learn the European way of playing and dealing with the pressures. I've learned so much and I've only been here six months.”

The next month will be a pivotal time for Cappis as he attempts to build a case to go to Poland. As a tall 6’1” central midfielder, Cappis also has the added value of versatility. His main position is the box-to-box No. 8 but he can also play the No. 6 (which he did at FC Dallas) and the No. 10.

Cappis clearly helped his case to go to the World Cup in Spain and might now be on the inside of the bubble. But it can still go either way and the next month will be critical.

“For me, personally, going into this last camp I was kind of on the bubble - maybe, maybe not,” Cappis said. “I didn't go to qualifying and I was probably on the outside looking in. But playing well and scoring two goals never hurts [laughs]. I think in the end of the day, I did all I could. I left it up to Tab to do what is best for the team and who is playing well at that time because part of it is how we do at our clubs.”