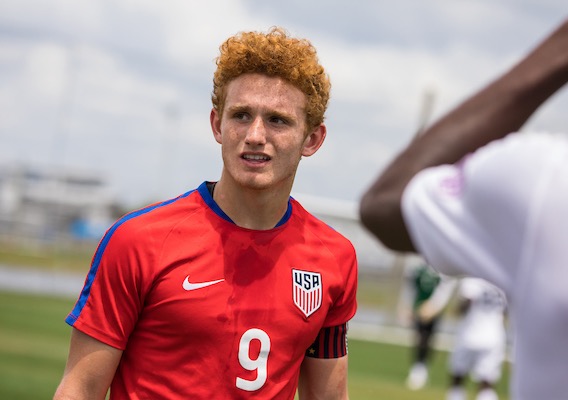 A banner year in 2017 leaves Sargent excited for the future

In 2017 Josh Sargent agreed to terms with Werder Bremen of the German Bundesliga and also achieved the rare feat of playing in both the U-20 and U-17 World Cups. ASN's Brian Sciaretta spoke at length with the St. Louis native about his stellar year and his future ambitions.
BY Brian Sciaretta Posted
December 13, 2017
9:55 AM
THERE IS NO QUESTION that the end of 2017 marks a transitional and uncertain period for U.S. Soccer. The national team has no coach, no technical director, no competitive games on the horizon, and a lame-duck federation president. Despite all that, there is a lot known as to which players will be part of the rebuilding process.

Of course Christian Pulisic and John Brooks will play a huge role. But 2017 made it clear Weston McKennie, Jonathan Gonzalez, Matt Miazga, Cameron Carter-Vickers and Tyler Adams will be firmly in the mix as well.

Yet another player who is eager to enter into this equation is Josh Sargent who turned heads in 2017 after playing in both the U-17 and U-20 World Cups and will formally sign for Werder Bremen on his 18th birthday in February.

November’s friendly against Portugal indicated that U.S. Soccer is going to steer the national team in a younger direction quickly, even before naming a permanent coach. Despite not yet being a professional, Sargent was surprisingly called up for that game but did not take part due to an injury.

And starting on January 1, it will be full steam ahead for Sargent who will take part in Werder Bremen’s winter break camp. That will essentially mark the start of his professional career after spending almost all of 2017 with three different national teams.

But like with any top young player, Sargent had important decisions as to where to begin his career. He admitted that staying domestically and playing for Sporting Kansas City (which held his homegrown rights under MLS’s geographic rules) was an option for him but one of the driving concerns was the lack of playing among top young Americans based domestically. In 2017, the only America teenagers in MLS to receive significant playing time were Tyler Adams and Djordje Mihailovic.

“Ever since I was a little kid, I always told everyone I wanted to go to Europe to play because you can see those are the best teams in the world,” said Sargent. “But as it got more and more realistic in terms of going pro, it became a long process trialing at clubs. I went to K.C. here. I had to see what was best for me and I talked to my mom and dad for a while and we decided that the best option was for me to go to Europe.”

“MLS was definitely an option for me at first. It would have been nice. Everyone speaks English and it's only three hours away. But I believe in life you have to do what is hard for you in order to build yourself as a person. When you look at MLS, you don't see many young players getting minutes. But Weston and Christian are getting minutes. I don't know how you can refuse that.”

But it was also not just about staying domestically vs. going abroad. Sargent had various European options after trialing with PSV Eindhoven, Stuttgart and Schalke. In the end he decided on Werder Bremen, a club that is currently flirting with the relegation zone. The club also made a managerial change in October and has scored just 11 goals through 15 games.

Sargent, however, was thinking big picture with Werder and felt at home with the club right away. Overall the prospect of relegation didn’t concern him and he is confident it will remain in the Bundesliga. The new manager, Florian Kohfeldt, previously managed Werder Bremen’s U-23 team and is familiar with Sargent.

“When I looked all these clubs, they were all such great teams,” Sargent recalled. “But what set Werder apart is that there was such a 'homey' feeling. When I went there, I could tell in my heart that this the place. The coaching staff was very nice and welcoming to me. Werder isn't doing too well but the fans are amazing and are still attending every game. It's an amazing atmosphere. The city is amazing, same with my teammates. I just loved it when I went there.”

As a native of St. Louis, Sargent was a product of the famed Scott Gallagher Soccer Club that has produced elite players such as Taylor Twellman, Tim Ream, Will Bruin, Brad Davis, Pat Noonan, Steve Ralston, Mike Sorber – all of whom have played for the United States national team. Kevin Kalish was the Sargent’s coach at Scott Gallagher from around the age of 11 through 16 and played a big role in his development.

“You could tell at a very young age he moved extremely well,” Kalish said. “He had tremendous insight and a great mentality. He was just a natural finisher and a goal scorer. While we helped with his development with the environment we put him in, he definitely was extremely naturally gifted. We've had a lot of tremendous players come through the club and Josh would be right up there with the best of them in terms of where we thought he would project out at.”

“Not to put pressure on Josh, but I just feel he has the physical profile that fits the Bundesliga well,” Kalish added. “He's a player that can deal with the physicality of the game but also he's technical and intelligent enough to play that style.”

Of course there is also another huge part of his career beyond Werder Bremen and that is the United States national team. Looking ahead Sargent knows that he is still eligible for the U-20 team and is not opposed to returning to that team for the 2019 U-20 World Cup but for now he is focused on the senior team.

“I hope to be playing up with the big boys from now on” he says while laughing but quickly adds: “I have to prove myself each day - first with Werder and then with the national team. I hope to do the best I can and hopefully the coaches believe in me and let me play as much as possible.”

In addition to signing with Werder Bremen, Sargent was nominated last week by U.S. Soccer for its Young Male Player of the Year along with Jonathan Gonzalez, Tyler Adams, Tim Weah, Luca de la Torre, and Erik Palmer-Brown. If the sole criteria was international play, Sargent would probably easily win after playing in two World Cups and scoring 12 international goals in 15 official games between the U-17 and U-20 national teams.

“It's quite a feat and it's not something that happens often,” Kalish said. “But there are so many variables that go into all of this. I don't know that I'd use the word surprised because I thought he had the ability, but to have all of it work together and come to fruition is just a tremendous feat for him. He seized the moment and actually performed.”

But looking back on 2017, Sargent acknowledges it is lot to take in. He knows that in one year he accomplished feats that few others have.

“The World Cups were two different experiences as a whole,” Sargent said. “Going into the U-20s, I didn't know if I'd even play but it turned out very well for me. But going in there I was just going for the experience to start, to see where I am against them. Then going from the U-20s to the U-17s, there were a lot of expectations since I did well with the U-20s. But I knew at the same time I couldn't worry about that. I just had to do the best I could and help lead the team since I had the experience of going to a World Cup.”

“It has definitely been an amazing experience for me,” he added reflectively. “It's been pretty hectic going from one plane to the next but I feel pretty honored. Not a lot of kids are able to do that. I'd redo it if I could. It's been a great year.”