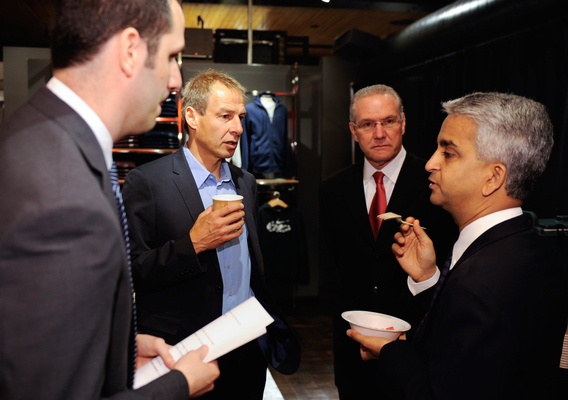 Jurgen Klinsmann has two big jobs within U.S. Soccer. Since December 2013 he has performed remarkably well in one role but has struggled badly in the other. Wendy Thomas gives her take here.
BY Wendy Thomas Posted
October 21, 2015
12:00 PM

DURING HIS FIRST TWO YEARS as U.S. men’s national team coach, Jurgen Klinsmann compiled an overall record of 27-10-7, won the 2013 Gold Cup (and all six matches during that tournament), secured the United States a first-place finish in CONCACAF qualifying for the 2014 World Cup, and set records for wins (16), winning percentage (61.4%), and consecutive wins (12) achieved during a single year.

In December 2013, on the back of the most successful run of games in recent history, U.S. Soccer signed Klinsmann to a four-year contract extension and expanded his role to include technical director of U.S. Soccer.

Klinsmann’s dual functions with U.S. Soccer require different skill sets and task him with different responsibilities. His job as coach is to develop the skills of his players, recruit players to the national team, monitor the performance of his players at their respective clubs, manage the other U.S. men’s coaches (goalkeeping coach, fitness coach, etc.), oversee training sessions, plan tactics for games, scout the opposition, select rosters for games, interact with the media, and win games.

As technical director, Klinsmann is responsible for supervising and expanding the country’s infrastructure for developing soccer talent, which includes selecting coaches for the youth national teams, helping design the curricula for the coaches of youth clubs, overseeing scouting, and increasing the federation’s footprint both in terms of its commercial presence (i.e., increasing revenues) and international reputation.

Since December 2013, U.S. fans have experienced a tale of two Klinsmanns—the coach and the technical director.

Klinsmann the coach has compiled a record of 15-11-7 during this span. He has led the team to the knockout stage of the 2014 World Cup, lost the 2015 Gold Cup, and lost the (newly conceived) CONCACAF Cup, thereby eliminating the U.S. from competing at the 2017 Confederations Cup. Klinsmann’s winning percentage has dropped precipitously from 61.4% for games played during his first two years as coach to 45.4% for games played since December 2013.

Klinsmann the technical director, on the other hand, has overseen an astonishingly fruitful, ambitious, and expansive two years of U.S. soccer development.

Regardless of whether one approves of or is willing to credit Klinsmann with the changes implemented during his tenure, there is no denying that a raft of improvements have swept across the U.S. Soccer landscape in the past two years, the more radical of which (such as those that challenge the pay-to-play foundation on which U.S. Soccer was built) have convulsed the bedrock of U.S. Soccer. These changes include:

AS YOU CAN SEE
, Klinsmann’s big-picture influence on the development of U.S. Soccer is significant and largely positive. But his influence on the U.S. men’s national team is, at least for now, not.

Klinsmann’s very real deficiencies are almost all small-picture problems: a lack of tactical acumen; an over-reliance on fitness training resulting in a disproportionately high number of soft-tissue and muscle injuries; fielding players out of position; excessive lineup experimentation (which minimizes the development of team chemistry); preferential treatment of certain players not empirically based on their performances (which results in Klinsmann fielding players who are injured and overlooking players who deserve call-ups); airing grievances with players publicly; accelerating youth prospects to the national team too quickly; and refusing to accept responsibility for game losses.

For me, it’s easy…In the last 10 years the Americans have had 30 to 40 players in Europe. We have two or three players in Europe, and that it is the great difference. Mexico doesn’t have that type of competition.

The pool of players from which Klinsmann has to draw is notably shallower than his predecessors in terms of the number of players competing at the highest level. Klinsmann is at a disadvantage in this regard and demands that he produce better outcomes should be tempered when comparing the pool of players at his disposal to the pool from a decade ago. Which is not to say Klinsmann’s head should not laid on the chopping block when the U.S. fails but rather the public should appreciate that, just as Barack Obama and Ben Bernanke had a finite ability to actually alter the condition of the economy using public policy during a recession (even when employing untested tools like Michael Woodford’s quantitative easing), a coach’s fate is predicated on not only his performance but other factors such as public will that punishment be effected.

Klinsmann’s focus on implementing performance-driven standards, increasing the intensity of practices, and encouraging players to focus on individual development and accountability is part of the dialogue that is necessary for developing a first-rate national team. While it’s fine for a contingent of the national team to play in MLS, when a player’s development reaches the outer limits of what MLS can offer, it is laudable that his coach wants to nudge him out of the nest.

Though no one path is ideal for every player, there are players who would be best be served by someone telling them, “Wil Trapp, Matt Miazga, Jordan Morris, Perry Kitchen, Bill Hamid, Darlington Nagbe, Sebastian Lletget, Luis Gil, Dillon Serna, Kellyn Acosta, Tommy Thompson, Erik Palmer-Brown, if you can get a European passport, do so and go to Europe. Go to the best team you can find that will still give you regular first-team minutes and learn all you can.”

Assuming that Klinsmann is not going to beneficently volunteer to step down as coach but remain as technical director, the only feasible options are for U.S. Soccer to either fire or keep both Klinsmanns. Presented with these choices, I would vote to keep the Klinsmanns. Here’s why:

1) U.S. Soccer can hire a tactician to work for Klinsmann, and it’s easier to hire a coach with a deep understanding of soccer tactics than it is to hire a technical director with a deep understanding of both how to restructure a country’s soccer architecture and U.S. soccer culture. Understanding tactics is only one component of Klinsmann’s job and he has enough strengths as a soccer coach (e.g., recruiting) that his tactical naiveté need not be a death knell for the national team.

Steve Jobs famously never wrote a line of computer code or designed original software for Apple. Instead, he partnered with the most talented software engineer he could find, Steve Wozniak, and delegated the work for which he was clearly unqualified. The best companies, government agencies, NGOs, and militias are led not by those who are best qualified to perform every task that falls under their chain of command, but rather those who identify those most qualified and then delegate to them. Klinsmann once said of his time in Germany, “I had to delegate authority to the people on my staff. That means you shave away the hierarchy.” So if Klinsmann doesn’t understand tactics let’s hire him someone who does.

2) There is no viable alternative. The Klinsmann-out bandwagon has bona fide justification for seeking his ouster but with whom should he be replaced? None of the MLS coaches commonly bandied about as alternatives are ready, not Jason Kreis (eight years head coaching experience), Peter Vermes (five years), or Óscar Pareja (four years).

Bruce Arena was a professional soccer coach for 20 years before being appointed national team coach. Ditto Bob Bradley. Both had proven winning records before they took over, and giving the job to someone whose curriculum vitae consists of a few seasons in MLS seems imprudent.

If U.S. Soccer wants an international candidate, it faces different concerns, namely that U.S. soccer culture is totally different from that of Europe, and any coach who assumes the reins of the national team needs to comprehensively understand and accept these differences.

One can only imagine the look that would befall Carlo Ancelotti’s face upon being told that MLS does not abide by FIFA international breaks or that Sporting Kansas City doesn’t want to release Matt Besler because it has a game against RSL that weekend. Who wants to explain pay-to-play to David Moyes? Or why there are only nine full time soccer scouts in this country?

Mexico’s Federation faced a similar problem when it attempted to hire Marcelo Bielsa following his resignation from Marseille. Many top coaches accustomed to the European system are unwilling to accept arbitrary and anachronistic limits on their authority.

Klinsmann lived in this country for 13 years before becoming national team coach, and like it or not he is uniquely qualified to appreciate MLS as the weirdly interesting amalgam of European soccer league and American sports league that it is. Before Klinsmann took over, he met with and studied great American coaches including Phil Jackson, Pete Carroll, and Mike Krzyzewski. And his vast network of connections and influence in Germany (where one of the strongest soccer leagues is located) is of genuine value to all U.S. national teams.

Above all, it’s hard to imagine that Sunil Gulati, who spent years wooing Klinsmann and doubled-down on his investment in the coach with the December 2013 contract extension, would abandon Klinsmann and admit that he erred in his assessment of Klinsmann’s coaching ability.

Of the 15 members that have voting rights in U.S.S.F, at least seven have direct or indirect ties to Major League Soccer. Don Garber is MLS Commissioner; Sunil Gulati is former deputy commissioner of MLS; Jeff Agoos is a former MLS player; Cindy Cone is a former Manager of the Portland Thorns (the Timbers’ NWSL team); John Sutter’s organization, U.S. Youth Soccer, is situated in the same facility complex as FC Dallas’ Toyota Stadium; Fabian Nunez led lobbying efforts that sought to have MLS award Sacramento an MLS franchise in the suburb of Elk Grove; and Donna Shalala was solicited by David Beckham during his efforts to land a joint stadium with the University of Miami when Shalala was the university’s President.

There are two primary operative forces in U.S. Soccer, personified by Don Garber on the one hand and Klinsmann on the other. Garber, undoubtedly the most successful soccer commissioner MLS has ever had, represents one school of thought about soccer in this country. Klinsmann represents the other.

While it is proper and necessary that MLS have a substantial voice within U.S.S.F, it is worthwhile to include a counterweight to MLS among U.S. Soccer’s biggest decision-makers, since it would be foolish to ignore that in a “Universe of Soccer” Venn diagram, MLS’ agenda does not perfectly overlap the interests of the national team.