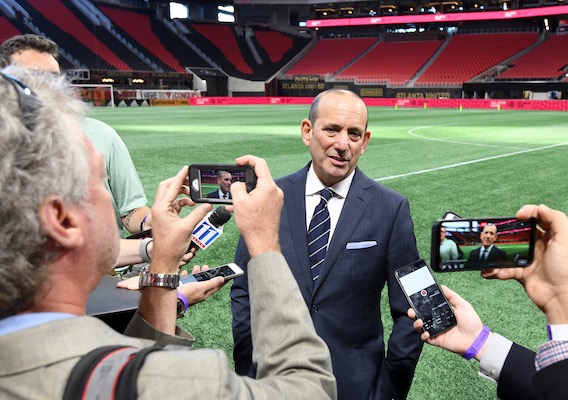 A Simple-But-Radical Way for MLS to Help U.S. Soccer

ONE DAY AFTER the U.S. men's national team’s elimination from World Cup qualifying, Major League Soccer issued a statement stating that it was going to seek to find areas that would help the national team improve. This line in particular stands out:

“We will take stock in the coming days and work to determine how we can continue to help the men’s national team become stronger and more successful going forward.”

We can all hope that in the future, MLS is serious and does look for ways to change for the better. But now that the dust has settled a bit from the U.S. team’s disaster, allow me to float one serious idea that doesn’t take a lot of work but could produce major benefits down the road: End geographical restrictions on players looking to sign with the league, end the draft, allow any college player to leave school whenever they feel the time is right, and allow young and incoming players the opportunity to sign with whatever team is the best fit for them.

It’s simple but revolutionary. For its entire existence MLS has been opposed to free agency and it has especially sought to regulate how players enter the league. It’s time to move beyond this and open to doors to allow the league’s teams to compete with each other for young players, thereby forcing clubs to build a case as to why players should sign for them.

Respecting that teams are different

One thing that is often not discussed but is very true is that MLS teams these days are vastly different from one other. This is one of the healthiest developments in the league and a reason why policies need to change.

Different teams have wildly different approaches in regards to developing players, using USL teams as a realistic pathway to the first team, selling players to Europe, and giving young players meaningful and important minutes during the regular season and playoffs.

The Red Bulls/Metrostars organization has helped the national more than any other MLS franchise. Tyler Adams, 18, was a regular starter for the the Red Bulls after winning the USL title with Red Bulls II in 2016. Homegrown players Alex Muyl, Derick Etienne, Connor Lade, and Sean Davis were also promoted to the first team. The Red Bull organization also was the launching pad for Tim Howard, Michael Bradley, Tim Ream, Jozy Altidore, and Matt Miazga. Most importantly, head coach Jesse Marsch and his predecessors have shown no hesitation about giving young players opportunities.

But compare that with the Portland Timbers and you find little in common. In Portland, you have a team where young players and homegrown products find it very difficult to play on the first team. Aside from Darlington Nagbe, the team has offered very little to the U.S. national team.

In between New York and Portland are a wide range of philosophies.

MLS rules are very complicated but the gist is that if a young player wants to turn professional or join an MLS academy, he has to sign with a local MLS team. If he wants to go to a different team, his options are to either sign in Europe or stay domestically at a lower level. Or he can go to college and hope to later get drafted by a different team.

What is missing here are true domestic-level choices. If a top teenager from Boston wants to either turn professional or join an MLS academy, he has to join the New England Revolution. But what happens if he believes the best fit for him is FC Dallas? And what if FC Dallas had interest in that player? There is no avenue for him to go to the team he believes is the best fit for him and the best place for him to develop as a player..

Some players have the option. A good example would be U.S. U-15 standout Gianluca Busio who grew up in North Carolina with no local MLS team. He was able to sign with any club he wanted—he opted for Sporting Kansas City—after receiving several offers from other teams in the league. But as MLS expands, fewer young players will grow up outside of an MLS market

MLS does not give young players in the United States nearly enough choice and there is a lack of competition for athletes. This is vastly different from other areas in the world. In England, if a top young domestic player from Manchester wants to join West Ham’s academy or sign with Fulham, he can relocate to London and do so. Aside from minor rule restrictions, his options are not limited to a local club but rather any club in England.

The need for competition

As a result, there really is a total lack of competition between MLS teams for youth-level talent. Everything is divided and each team has a slice of the pie. The teams compete with each other and are incentivized in the sense that they can use their resources provided to them in order help their club’s first team. But these teams do not compete at all for resources themselves.

For example, the Seattle Sounders organization knows it is going to get the best players from the Seattle region and it knows it is not going to get a top young player from Los Angeles or Dallas. But what happens if MLS teams had to compete for resources? This would mean ending these geographic restrictions and the draft.

MLS teams would have to sell themselves to players as opposed to automatically being assigned players. If an MLS team is not good at playing young players with the first team, the chances are young players from that team’s geographic region will look for another team in MLS.

What is particularly interesting is that small-market clubs would benefit too. If a club like Minnesota United developed a great academy, played young players, and was willing to sell its top talent to Europe—like the Red Bulls have done—it could atract top talent from all over.

The current rules and restrictions were created at time when MLS teams were still trying to create the infrastructure to develop players. In return, the teams wanted to be able to have strong draw for local talent. Each team got a monopoly on the players inside of its market.

But the training wheels need to come off now. Some MLS teams are clearly better than others at developing players. It's time to have a system that makes teams compete and gives players more options as to what is best path for them to begin a career.

The rewards could be huge

MLS is crucial to the advancement of American soccer and the league has come a long way. It has enormous potential but many of the rules and restrictions it created years ago are now more of a burden.

But if the league truly wants to help American soccer, it needs to focus on how players enter the league by rewarding the best MLS academies and forward-thinking coaches who give young players meaningful minutes. These academies are true resources for American soccer and getting top American athletes into them is ideal goal—not only to help players but also to incentivize the other clubs to do the same.

This is how the league is going to ensure that more young players get on the field—which will in turn help build a new generation of American players. Some will eventually move to top European clubs, and that's fine. MLS will have done a fine service to help the players get there and will generate revenue as a result. Some top players will remain in the league and become stars here. Either way, the league will be playing its part in helping the progression of the U.S. national team and American soccer overall.