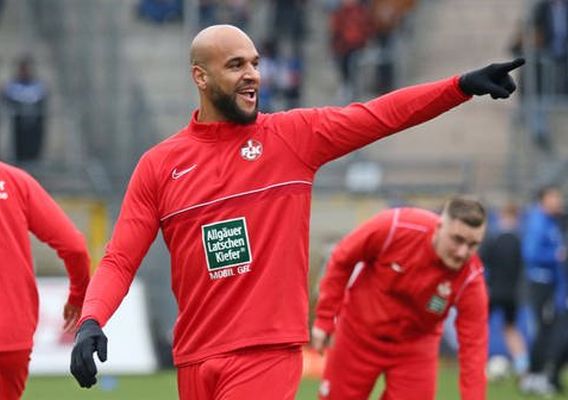 Younger fans might not realize it, but FC Kaiserslautern was once one of Germany's biggest and most popular clubs. The past decade has not been easy for the club but its fan bases remains big and passionate. At the heart of the team's attempted rebirth is American forward Terrence Boyd, who has been very effective so far to start the 2022/23 season. He spoke at length with ASN about the club, his past, and his future.
BY Brian Sciaretta Posted
October 14, 2022
10:50 AM

HISTORICALLY, FC KAISERSLAUTERN is one of Germany’s biggest clubs. They have won two German Cups and have won Germany’s top league four times, with the last coming as the 1997-98 Bundesliga champions where they advanced to the Champions League quarterfinals the following year. Since 2005, however, the team has mostly played in the second tier but 2018, the club was relegated to the third tier and in 2020 the storied club filed for insolvency.

The club managed to survive that ordeal and is in the gradual process of picking itself back up – with an eventual eye on a return to the Bundesliga.

Terrence Boyd, 31, has been at the heart of the club’s initial steps of rebuilding. With the club in a promotional hunt in the 3.Liga last January, Kaiserslautern were successful in acquiring Boyd from Hallescher, a smaller club in the 3.liga. Kaiserlautern had tried to sign Boyd in a previous window by Hallescher refused.

That move proved critical to Kaiserslautern’s promotional efforts as Boyd scored nine goals in 13 appearances to return to the 2.Bundesliga. For Boyd, it was a big test to be part of the rebuilding efforts of one of Germany’s biggest teams.

“Last winter was a crossroads. I was asking myself if I wanted to take on the challenges of Kaiserslautern or do I stay at Hallescher where I could miss every practice and still start on the weekend?” Boyd said. “Kaiserslautern wanted to get promoted and there was pressure. They had financial problems. But they needed a striker.” 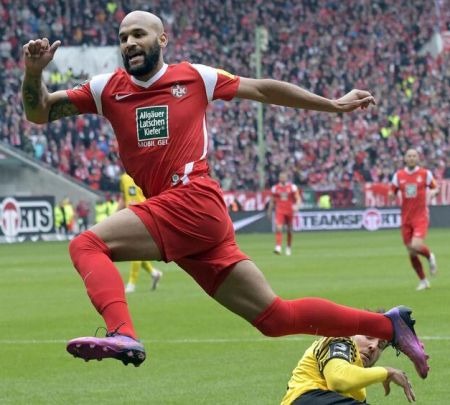 “I said, let's do it,” he added. “Take on the challenge. Prove yourself. And show that you still have it. I am 31, which is getting old for a footballer, but I feel like I am in the best shape of my life.”

Earning promotion to the 2.Bundesliga is only the start of Kaiserslautern’s rebuilding efforts. The club is home to one of the largest and most passionate fanbases in Germany. The 50,000 capacity Fritz-Walter-Stadion is regularly filled, and it backs the team with an electric atmosphere. But with that level of support comes added expectations.

So far, things have gone well for both Boyd and Kaiserslautern to start the 2.Bundesliga season. Through 11 games, Kaiserslautern has 16 points to sit in eighth place. Wins, however, have been difficult to come by lately and the club has drawn its last six games.

Boyd has been very effective in the 2.Bundesliga and he remains critical to Kaiserslautern’s attack. He has five goals, two assists, and is just two goals off the league’s scoring lead.

“While I am still in the second league, I feel like I am a way better player now than I was at Rapid Vienna or Leipzig,” Boyd explained. “I feel like I found my game. I know who I am, and I know what I can do. You have experience and you find an inner rhythm as a football player.” 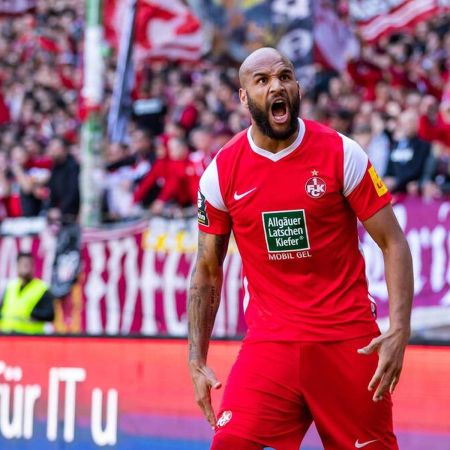 Regarding a return to the Bundesliga, Boyd is preaching patience. Even with the strong start to the season, Boyd stresses that the club is still recovering from the bankruptcy setbacks – particularly with staffing and youth development. The club’s U-17 and U-19 teams were relegated out of their respective youth divisions and this has made it harder to develop players.

“We still have a long way to go to get back to the Bundesliga,” Boyd said. “So many things. You have to set the base… Right now, we are just being humble and giving 100% to every game. Focus on staying in the league and continue to get this club back to full strength. Playing the underdog role for now and then building ourselves back up… The stadium one of the best in Germany with the environments. Kaiserslautern is a sleeping giant that has just woken up again.”

For the German-born Boyd, his career has been a roller-coaster with highs and lows. It started when he was a top performer for the youth teams of Hertha BSC and then Borussia Dortmund. That put him on the radar with U.S. Soccer and Boyd went through the process of obtaining an American passport. After playing for U.S. youth teams, Boyd made his debut for the full U.S. national team in February 2012 before making a first team club appearance. 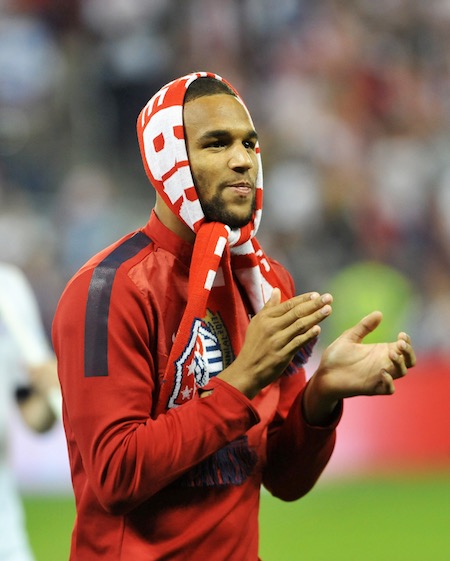 That year, however, his club career started to take off as he moved to Rapid Vienna and was a top scorer in the Austrian Bundesliga. He moved to RB Leipzig in 2014 and a series of serious knee injuries limited him to just seven appearances with Leipzig from 2014-2017. That year, he moved to Darmstadt in the Bundesliga.

“When I was at RB Leipzig, I tore my ACL,” Boyd recalled. “Then when I went to Darmstadt, I didn't play there. You have that feeling of being needed and being a starter - then all of that is gone. It's a strain and when you only make the bench, it is frustrating for any player. I kind of lost the passion and love. At Darmstadt after Leipzig, I wasn't the same player because it takes a while and I underestimated it when I was out for one and a half years. I thought I was good to go, and I was back to my old self. That wasn't the case. I didn't give myself the time mentally or physically.”

In 2019, Boyd made the bold decision to sign for Toronto FC. The move was short-lived and he played just 11 MLS games without scoring a goal. While Boyd was born and raised in Germany, he developed a close attachment to his American heritage and playing for the U.S. team has always been a source or pride. While Toronto is in Canada, playing in the top American domestic league was a dream for him and his short run still disappoints him. 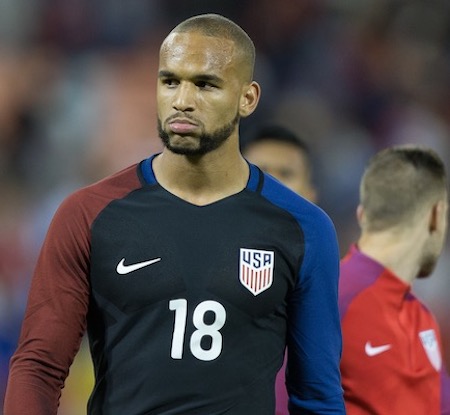 “In Toronto, even when I had the chance, I sucked. I didn't perform,” Boyd said bluntly. “That's frustrating. I was there all by myself. I had a baby and another baby on the way. They were back in Germany. But that's not the reason you play poorly. Toronto just didn't work out… I still love and rate MLS. It's a nice league. I just wish that I would have performed well. Players here still come up to me and ask about the league and I always tell everyone that I recommend it, even if I didn't succeed there.”

“My first start was in the CONCACAF Champions League and I missed that penalty. After that, I called my wife and told her that I am not sure we need to find an apartment here. It might be a quick ride…. I scored in the first, second, third, and fourth leagues in Germany but I never scored in MLS or with the U.S. national team, and that really sucks.”

Boyd is still very much feels connected to American soccer even if his national team days are likely over. He watches the highlights of all the U.S. national team games and points out that he is optimistic for the team’s future success. On the club level, he is aware of the numerous American players that are now playing in Germany and throughout Europe and is in touch with many of them individually.

“I feel love for all the American talents popping up there or here in the German setup. Every time I play against an American here, I speak with them and tell them to keep it up. I want to see them on the national team. I get a lot of joy seeing Americans thriving in Europe. I just want to see them be successful.”

As for Boyd’s future, it is bright despite now being over the age of 30. He has fought through injuries, physical and metal fatigue, and poor club situations to now have him in position to help in the rebuilding of a big club.

There is also a focus on his future beyond his playing days. He is already starting to work with younger players at Kaiserslautern and is exploring the idea of becoming a youth coach. He realizes that this is a long process to learn the job of coaching and is working with Kaiserslautern about this role.

But for now, his priority is Kaiserslautern and lifting the club back to where it feels it should be. At this point, Boyd believes he is the right striker for the job. His performances thus far support his belief.

“At my age, you're not looking at what is the next move and if you want to get transferred again,” Boyd said. “My motivation right now is to make the team better. I enjoy working with other strikers and younger players. I still feel like the little kid playing on the streets. The love is back, and I just want to keep scoring and win games.”