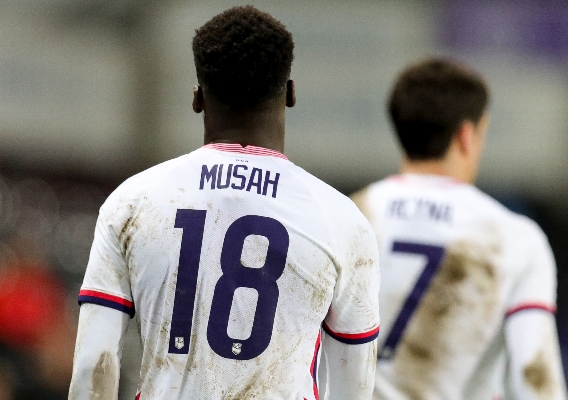 A look at the performances of the USMNT debutants vs. Wales

The U.S. team's scoreless draw against Wales on Thursday probably won't be remembered for anything specific moment on the field. But rather the top storyline was the debut of six promising young players. ASN's Justin Sousa looks at their individual performances.
BY Justin Sousa Posted
November 13, 2020
11:15 AM

THE UNITED STATES men’s national were back in action for the first time since February with a squad full of young players and few “veterans” sprinkled into the mix. Six players total made their USMNT debuts yesterday with Yunus Musah, Gio Reyna and Konrad de la Fuente starting the match and Owen Otasowie, Johnny Cardoso and Nicholas Gioacchini getting minute off the bench. Tyler Adams also made his return the USMNT for this first time since March 2019 while Timothy Weah came off the bench for his first appearance since 2018.

Despite playing to a goalless draw, this young group of Americans played Wales off the field for most of the match. It took Musah time to grow into the match, but he eventually found his comfort on the ball and started pushing the U.S. forward with his directness through midfield. Reyna and de la Fuente didn’t have the best debuts, but it was more a result of the unfamiliarity the teenagers had with the offensive system after just three days of training. There was a lot to learn from these three players and a few of the other debutants in this match, though, and these are my observations from that match.

There was very little to criticize after Musah’s 80-minute debut yesterday. The 17-year-old put in an inspiring performance in midfield that complimented Adams’ defensive work ethic and Weston McKennie’s offensive flair nicely. He often found himself rotating with Reyna between his starting central midfield role and his compatriot’s position on the right wing, demonstrating both the positional fluidity of Gregg Berhalter’s system and Musah’s own versatility.

One of the immediate qualities in the youngster’s game that came to light against Wales was his press resistance in the center of the park. Musah was dispossessed just once this game despite many of the times he received the ball being with his back to goal, and it’s fine if the ensuing pass after he broke the press didn’t come off. His first half performance, for the most part, was played safely, but his performance in the second half showed a bit more initiative in wanting the ball and making things happen.

how many midfielders do the USMNT have who can do what Yunus Musah did here – receive ball with opponent on back in defensive third, turn out, make semi-progressive pass – consistently?

heck, how many have they *ever* had? pic.twitter.com/WmmDH0GXSA

There were two occasions in this game in which the defender pressed Musah heavily on his back, and he showed he could maneuver his way out of trouble. Turning under that type of pressure seemed to be his Achilles heel so far at Valencia, but the increased space he found in these midfield pockets enable him to find a bit more wiggle room to shake off his man. As a winger at Valencia, playing close to the sideline closes off an entire side Musah could turn into, and he often looked to turn onto his left foot in these moments.

This moment was promising for Musah because he was able to keep the ball under pressure and turn towards goal. He's shown that he can do it when he finds pockets of space to receive the ball in without much pressure, but teams are going to recognize his threat and hound him. pic.twitter.com/8KURvZjf9q

Berhalter’s only real criticism of both Musah’s and the entire team’s performance last night was the inability to play the final ball despite having the quality to do so. Musah has said in previous interviews that he knows he can improve in his passing and adding that asset to his game would put a nice bow on his overall skill set. 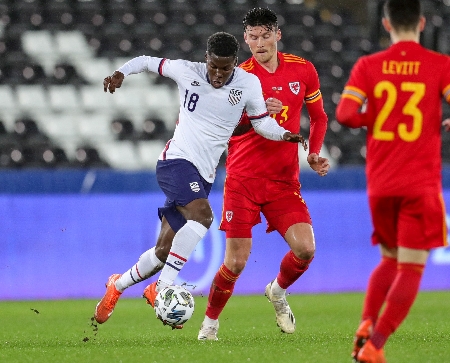 It was a tough debut for Reyna. He never really got comfortable out on either wing, within the half-spaces or playing behind Sebastian Lletget as a 10. His quality showed in flashes, especially in one-on-one situations where he led the U.S. with his three dribbles completed, but the combination play wasn’t quite there for the teenager on the night. His creativity and ability to create chances are visible when he plays for Borussia Dortmund, albeit he has Braut Erling Haaland to pass to, and they will eventually transcend to the national with more minutes. 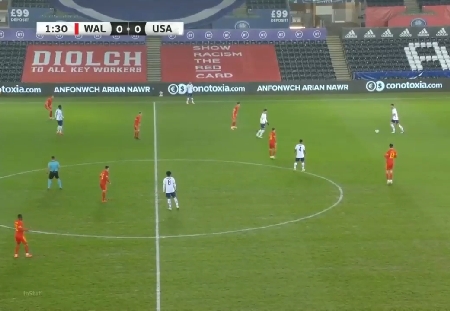 He and Musah often interchanged positions, and this allowed Reyna to get the ball in deeper positions when they could not break the first line of press. Reyna seemed to do this a bit too often, though, and it removed him from the advanced positions Berhalter would have wanted him once the team entered the final third. He’s capable of creating opportunities from deeper positions like the video below shows, but there needs to be more of that further up the field.

Musah and McKennie broke those first defensive lines well yesterday and perhaps a more natural striker would have helped in progressing the ball forward as well, but Reyna struggled to get a foothold on the field. The lack of trust that comes with limited time training with players at the international level was also evident in the way those ball-hog moments started perforating through Reyna’s game and saw him miss the opportunity to play the final ball. 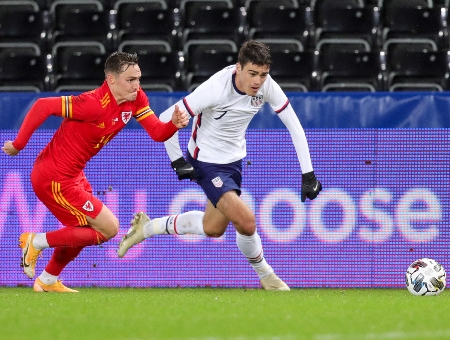 As he develops a familiarity with his teammates, Reyna will probably allow them to do more of the work in those deeper positions. Having a more natural number nine to demand play be a bit more direct would also help get the ball forward quicker so that Reyna can see more of the ball in a more advanced position. Lletget offered the ball security Berhalter wanted in this match, but there needed to be more questions asked of Wales when the team gets the ball to a striker’s feet quickly and the pieces around him start looking to make direct runs in behind.

I can’t tell if it’s more FC Barcelona of the full back to show more flair and have a greater influence in the final third than their winger or less so but either way, de la Fuente struggled the most of the USMNT’s debuting trio.

He suffered most from the front three’s lack of chemistry and had a hard time playing most of the game in the half-space rather than hugging the sideline. De la Fuente has a very direct style of play, and that was restricted by Berhalter’s focus on retaining possession and opting to concentrate on the build-up play for this game. He connected well with his teammates, but it was clear he wanted to run onto passes in the wide channels rather than be the wall pass to the full back. The missed opportunity six yards out from goal also put him in a worse light than necessary considering, again, that this front three has never played together.

A gift falls for Konrad de la Fuente, but he launches it over the bar after settling and turning. #WALvUSA

The pleasant surprise of his game was that de la Fuente showed his commitment to helping on the defensive side of the ball even when he wasn’t seeing much of it going forward. It’s easy for a forward to not want to press as the frustration of not seeing the ball often enough settles into their heads, but de la Fuente was unphased by the lack of build-up play that went through him. He forced Wales inside and towards traffic every time they tried to break down their right side, and that allowed Adams, Musah and McKennie to win back the ball and initiate a counter.

Konrad's showed commitment to the defensive side of the ball yesterday even when he didn't see much going forward. Played his part in an efficient U.S. press/defensive structure well.

Wish the team tried to be more direct with his runs as Adams attempted to do here. pic.twitter.com/EIRlyO9TIj

De la Fuente saw a bit more of the ball in the wider channel when he and Reyna swapped wings, and Dest’s understanding of how to make underlapping runs as well as overlapping runs helped provide that space for him. On the right side, however, de la Fuente’s movement is more restricted to driving down the wing as opposed to being able to cut inside from the left or play in the half-space occasionally. The team had a game plan and stuck by it, but the next step in this their evolution is understanding when patient build-up needs to take a backseat in favor of a more direct approach to test the opposition’s defensive structure. 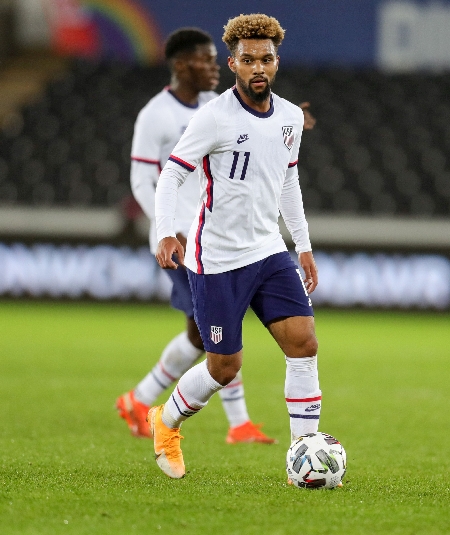 Notes about the other debutants 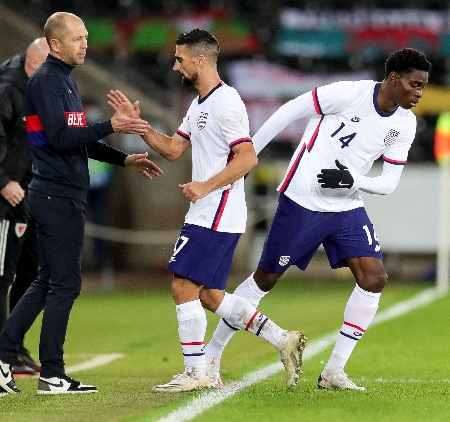 Johnny Cardoso played 20 minutes after replacing Tyler Adams and taking up the holding role in midfield. He was a little clumsy defensively, but he looked comfortable on the ball and got involved higher up the field when the opportunities presented themselves.

Nicholas Gioacchini saw a little under 10 minutes in his substitute cameo. His most notable play during that time though came when he was practically playing right back against Daniel James, preventing the Manchester United winger from getting a cross into the box.

Owen Otasowie played less then five minutes off the bench. Hopefully he gets more against Panama as he is an interesting prospect given his large frame and technical skill set.