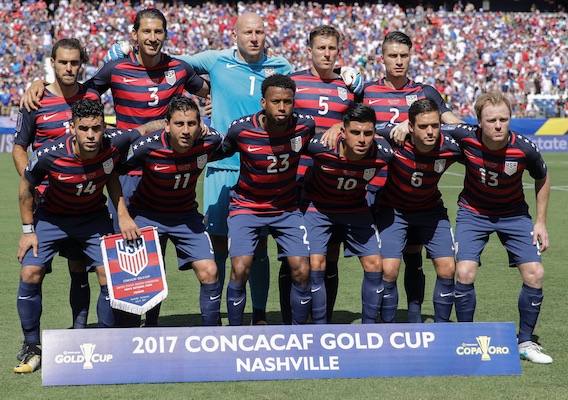 4 Thoughts on the United States' Draw with Panama

Bruce Arena's men fell short Saturday against Panama, but with any luck the mostly inexperienced players will learn from their mistakes and be prepared for the 2017 Gold Cup progresses.
BY Brian Sciaretta Posted
July 09, 2017
12:00 PM

The United States opened its 2017 Gold Cup campaign in disappointing fashion with a 1-1 draw against Panama on Saturday. After a second viewing of the game, it was clear that Panama managed to up the intensity of the game for a 20-minute stretch—a tempo the U.S. was unable to match.

For most of the game, the Americans were probably better but Panama was able to player much better for a stretch and had the United States firmly on is heels. That period started immediately after Dom Dwyer gave the United States a 1-0 lead in the 50th minute. Instead of going in for the kill, Panama completely turned the tide and the Yanks looked completely lost.

An early draw is not the end of the world at the Gold Cup but Bruce Arena will have to hope that his mostly inexperienced team learned from the game. The United States had the edge in talent but in competitive international games, motivation and intensity can be an equalizer. Now he will have to hope his players will know how to handle an upstart opponent that is able to gain the momentum in a game.

In order to win Group B, the U.S. will have to avoid slip-ups while generating offense to surpass Panama in the goal-differential tiebreaker. Here are my thoughts on the game.

Arena made two changes from the Ghana game, putting Omar Gonzalez in for Matt Hedges and Alejandro Bedoya in for Paul Arriola. Neither move helped the team as Bedoya failed to contribute offensively and Arriola’s speed was missed. Meanwhile, Gonzalez lost his focus twice when Panama began taking control of the game—and was one of several players at fault for the equalizer.

Hedges and Matt Miazga are both more than capable of filling in and actually boast two of the best resumes of American central defenders over the past 18 months (outside of Geoff Cameron and John Brooks). Miazga is coming off a season where he won the Dutch Cup after fighting to win the starting job. Hedges has been maybe the best central defender in MLS the past two years.

It’s also safe to say that the Graham Zusi right back experiment is not going well. After a slightly better than average game against Ghana, Zusi looked lost frequently against Panama. It's not really his fault because he is not a right back. He can cross well but there are other right back options. Yes, DeAndre Yedlin is the first choice right back and Arena is trying to find a backup but it would make sense to see what Eric Lichaj can do right now.

When Arena sits back to watch tape and make adjustments, he might see the same thing.

It was particularly fascinating after a second viewing to see how Panama responded after Dwyer’s goal. Many teams would have crumbled playing on the road in front of 40,000 people after conceding the first goal. But Panama used it as motivation and upped the tempo of the game. The U.S. couldn't keep up. That stretch, from the 50th minute to around the 70-minute, was all Panama needed to grab a point.

That is the difference between a friendly and an official competition. Even players who have impressive club success like Joe Corona and Omar Gonzalez—who both have Liga MX titles—were particularly lost.

Of course not all of these players will be in the mix for the upcoming World Cup qualifiers or the World Cup team next year, but Arena is hoping multiple players emerge. Despite Saturday's disappointing game, everybody on the roster has a chance to change the narrative. Hopefully this was a lesson in learning how to bring intensity, or at least to deal with an opponent who is playing at a higher level.

Brad Guzan and Kelyn Rowe stood out Saturday—Rowe, in particular, is looking like the breakout performer so far in July.

The New England Revolution regular still needs to work on his defense as he missed a tackle in the build-up to the equalizer and twice did not close down on Panama’s midfielders who were attempting shots from distance. But the pros far outweigh the cons at this moment. He is comfortable out wide and brings a welcome dose of creativity.

Villafana, meanwhile, also played an important role getting forward. The chemistry between Rowe and Villafana is noticeable as the two have a sense in how to get forward together.

Dwyer had stretches of invisibility but he did well to finish his one chance and his quickness and aggressive play in the box still has him in strong standing with the team for the Gold Cup and beyond.

4). Where it went wrong tactically

Panama did its homework heading into the game. The United States’ problems started on the right side, as Zusi and Bedoya contributed little. That made it easier for Panama to shut down the central area of the field with Dax McCarty, Kellyn Acosta, and Joe Corona looking to play the ball to the dominant left side of Rowe and Villafana.

In the one-striker setup, Corona has a huge responsibility in the No. 10 role and Panama frustrated him early in the first half. Worse, Corona did not make adjustments in the second stanza. Acosta and McCarty were not great, but with the right side struggling and a No. 10 not creating plays, there were simply too many holes across the field. The only real avenue the U.S. had was the left side, and that’s where the goal and every other opportunity came from.

On top of that, set pieces have yielded very little—both in terms of delivery and targets in the box.

What do you think of Brian's take? Share your POV in the comments section below.