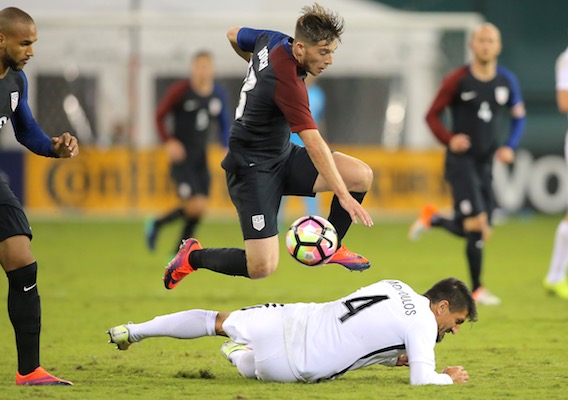 4 Thoughts on the U.S.' Drab Draw with New Zealand

AS THE UNITED STATES NATIONAL TEAM left the field after a disappointing 1-1 draw against New Zealand, it marked the final opportunity for Jurgen Klinsmann to tinker with his squad ahead of the high-profile Hex opener against Mexico next month. While most of the lessons learned were concerning, there were bright spots as well.

Klinsmann opened the game with a 4-3-3 formation which has never really suited the U.S. Tuesday’s game only reaffirmed that as the chemistry in the midfield was lacking and Jozy Altidore in particular was lost.

But the 4-3-3 formation on Tuesday also missed the key element of aggressive fullbacks and this added to a lack of support in the midfield (Kellyn Acosta and Michael Orozco are not the ideal fullbacks for this formation). Combined with DeAndre Yedlin and Acosta playing out of position, it made for a mess of a game.

Given that this was just a friendly, experimenting was fine but the chance was lost to build momentum heading into November.

Here are four thoughts on the game.

Kljestan and the Kids are Alright

The three best players in the game were Sacha Kljestan, Lynden Gooch, and Julian Green. They all brought intensity to a lethargic match and Kljestan was always be looking to make the right pass and play attackers into dangerous positions.

Kljestan’s effort was particularly impressive given that  Yedlin looked lost playing out of position on the wing, Michael Bradley looked uncomfortable in the formation with Perry Kitchen, and Altidore either failed to make runs or lost the ball with a poor first touch. Despite all that going on around him, Kljestan looked a cut above.

But the real story, however, is the youngsters on the team are starting to make cases. In previous games Christian Pulisic lived up to the hype while Paul Arriola made the most of his first two caps. Jordan Morris also looks to be in strong shape to help the team next month after a very good rookie season.

In this camp, Green looks more confident than in his teenage years and Gooch had a very strong first cap as he helped the U.S. team press for winners. Acosta could probably be included but it is tough for him to play up to his potential out of position at left back.

Kljestan and Pulisic could very easily start against Mexico. But as for the other youngsters, it will be an interesting test for Klinsmann to see how much he really trusts players like Gooch, Green, Arriola, and Morris.

Michael Bradley was out of synch early with the U.S. team and did not set the tone early in the game. Yes, the captain eventually found his way into the game and was strong at the end but he needs to be able to put it together for the full 90 minutes.

Meanwhile, Altidore looked completely lethargic and lost. This is particularly disappointing coming from the great run he has had with Toronto since returning from injury after the Copa America. The forward pool is tightening despite the concerns surrounding Clint Dempsey. Aron Johannsson is returning from injury. Morris has only solidified his case, and Bobby Wood is playing well. Altidore is probably still in line to start against Mexico but others could be gaining ground. The wild card could be Juan Agudelo, who earned a token appearance but is playing well for New England.

Goalkeeping was not strong

With Brad Guzan and Tim Howard out for this contest, Klinsmann stated that his was a big opportunity for other goalkeepers to step up and seize the third spot in the hierarchy. Ethan Horvath was decent but unspectacular in earning a shutout against Cuba. In the New Zealand game, neither William Yarborough nor David Bingham impressed.

What that does is set up an interesting January camp where Horvath will likely take part but it could also open the door back up for Bill Hamid or others. Right now, it would seem Horvath has the inside track at the third spot, but it appears far from settled.

The first choice central defense tandem is Geoff Cameron and John Brooks but both have had their share of injuries in recent years. That makes the backup central defenders are very important to this team and the pecking order is still not settled.

Omar Gonzalez and Matt Besler were given the nod against New Zealand ahead of Steve Birnbaum. Gonzalez did not fare particularly well and looked rusty. Meanwhile, Matt Besler looked confident and poised. Yes, Besler made a mistake on New Zealand’s goal but overall he was pretty sharp in his distribution and positioning.

For the start of the Hexagonal, Besler has a good chance at making the roster but Klinsmann might have to make a tough choice between Gonzalez and Birnbaum.