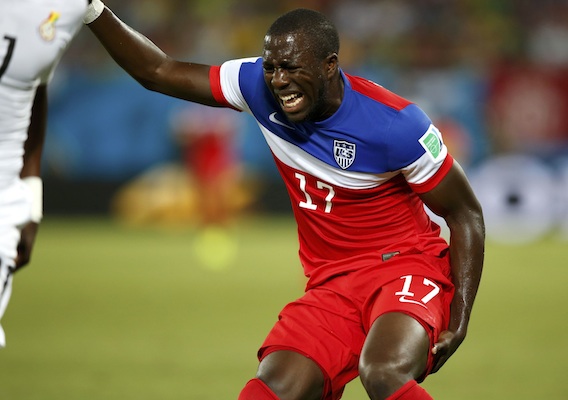 3 Options for U.S. Roster And Formation vs. Portugal

With Jozy Altidore likely out for the Portugal match on Sunday, Jurgen Klinsmann has some major personnel and tactical decisions to make. ASN's Blake Thomsen walks you through three possible approaches.
BY Blake Thomsen Posted
June 18, 2014
11:00 AM
THE UNITED STATES' HEART-STOPPING WIN over Ghana delivered an invaluable three points, but it didn’t come without significant cost. Clint Dempsey suffered a broken nose and Matt Besler picked up a slight hamstring problem, but the real issue was the hamstring strain of Jozy Altidore, which will almost certainly keep him out for the rest of the group stage, if not longer. Given the omission of Terrence Boyd from the 23-man roster, Altidore’s absence leaves the U.S. criminally short of genuine hold-up play. All of this leaves Jurgen Klinsmann with some fascinating decisions to make. How will he alter the team to cope with the loss of Altidore? This, perhaps even more so than the pre-Ghana preparations, is where Klinsmann will earn his money as U.S. coach. Let’s run through the most likely possibilities for the team’s new setup, analyzing the strengths and weaknesses of each option. We’ll use ASN’s easy-yet-powerful Starting XI tool to provide visuals of what each setup would look like.

Just kidding. And to confirm, there are no injury substitutes allowed at this point of the proceedings, so the U.S. will not be allowed to bring in an Altidore replacement, Donovan or otherwise.

The Real OPTION 1: a straight swap

The most straightforward option, and the one we saw deployed against Ghana, is to simply slot Aron Johannsson, or perhaps Chris Wondolowski, in for Altidore and keep the rest of the team unchanged. PROS: There are undeniable benefits to this approach, with the main one being that it wouldn’t disrupt what has been a highly promising few games from the U.S.’s midfield and defense. Aside from (stunningly) Michael Bradley, each U.S. midfielder and defender has delivered strong performances in two straight games, and for that reason it makes plenty of sense to maintain the same shape. Jermaine Jones has been particularly immense in his hybrid left/center midfield role, and it seems logical to keep him there, as well as Kyle Beckerman as a deep-lying, true defensive midfielder. CONS: The major issue with this approach is the skill set of Johannsson. It wasn’t really his fault, but the speedy Icelandic-American came in and struggled to make much of an impact against a Ghana team that maintained considerable territorial dominance. Johannsson simply doesn’t offer the holdup play in a two-striker set that is needed as an outlet against quality opposition, and that is what the U.S. will face in its last two group games and beyond. Wondolowski also has big limitations in terms of holdup play, as he lacks the raw athleticism to give world-class central defenders problems on 50-50 balls. Therefore, playing one of the two reserve strikers alongside Dempsey could result in a similar pattern of play as we saw against Ghana, with the U.S. under fire and unable to relieve the pressure with long balls to the forwards. With all that said, it’s worth noting that Dempsey wasn’t able to offer his usual serviceable holdup play, as his broken nose certainly wasn’t conducive to the heading or jostling with central defenders that strong holdup play requires. Also, Bradley has rarely been at his best in his new advanced role. He seems more comfortable playing a little deeper in midfield, and perhaps there is a solution to the loss of Altidore that allows him to drop a bit farther from goal.

Considering it’s been the most used formation of Klinsmann’s reign, the 4-2-3-1 represents a setup that the U.S. knows well. This edition, however, would provide a slight wrinkle, with Beckerman and Jones in the holding midfielder roles. They’ve played together in that role just once before—in the World Cup berth-clinching win over Mexico in September—but they worked quite well together, and we could very well see it again. We’d expect Jones to be slightly more adventurous and Beckerman to maintain a deep position, as we saw against Mexico. PROS: At this point—somewhat incredibly—it’s impossible to imagine a lineup without Beckerman, Bradley, and Jones involved, so this would maintain that stability-providing dynamic. This setup would also allow provide more natural width than the diamond/Christmas tree. There will likely be ample space behind Portugal’s wingers in its classic 4-3-3, which Alejandro Bedoya and Graham Zusi could very well exploit. Perhaps most importantly, with five midfielders who are solid on the ball, this lineup would allow the U.S. to play through the midfield far better than it managed against Ghana. Bradley’s very advanced position would allow him to harry Portugal’s three center midfielders without fear of being caught too high up the field (but he might struggle to keep up with them unless Dempsey helps him out considerably). And finally, this lineup features probably the U.S.’s best 11 players—with apologies to Johannsson—which is rarely a bad idea. CONS: Given Bradley’s latent attacking potential, this isn’t guaranteed to be a negative, but this formation would leave Bradley even higher up the pitch than he’s been lately, where he has largely struggled on the offensive side of things. Furthermore, in this setup, the U.S. is sorely lacking in potential impact substitutes. Johannsson/Wondolowski for Dempsey is possible, but it’s hard to imagine Brad Davis or Julian Green coming on for the sure-to-be-exhausted wide midfielders and making much of an impact. Lastly, it’s impossible to dismiss that the 4-2-3-1 has often struggled offensively, as it tends to isolate U.S. forwards. Two items of note toward that point, though:

1) With Portugal’s horrendous goal differential, a draw here would be an excellent result for the U.S., and thus a defensive lineup that proves hard to break down is not a terrible idea. 2) Though the 4-2-3-1 often struggled to break down bunkered-in opposition—hello, CONCACAF minnows!—it proved more prolific against bigger fish who tend to attack far more and leave space for the U.S. on the counter. We saw two goals against Mexico, two against Belgium, and a famous four-pack against Germany, all with the U.S. in the 4-2-3-1. Also, the 4-2-3-1 typically provides a decent springboard for counters, and with Portugal needing a win, Cristiano Ronaldo and Co. will almost certainly pour numbers forward from the first minute, possibly leaving space for the U.S. to break into.

A final note while we’re in this section: we could also see a 4-2-3-1 with Dempsey in the No. 10 role, Johannson or Wondolowski up top, and Bradley in place of Zusi or Bedoya. This writer thinks that the pictured option is more likely, though, as this wouldn’t solve the holdup issues from Option 1.

OPTION 3: MIX IN THE CHRISTMAS TREE

First things first, that pun in the subhead was very much intentional. You’ll notice that Mix Diskerud has been added in this option, bringing creativity and distractingly good hair to the equation. Also, this option sees Bradley drop deeper and Bedoya or Zusi moved a bit closer to goal. PROS: This formation would see the U.S.’s three central midfielders finally deployed in their most comfortable positions, which could make for a trio that is extremely tidy in possession and also quite difficult for opponents to break down. This lineup also brings Diskerud’s creativity to the forefront. Creativity in the final third is virtually always at a premium for the U.S., which is what makes Diskerud such a tantalizing prospect in the first place.

Some afternoons are better than others #USMNT

Is the above tweet a clue about Klinsmann's plans for Portugal? Or did Mix just enjoy the beautiful weather in Sao Paolo?
In this setup, the U.S. maintains the quality on the ball in a five-man midfield that we saw in Option 2, and perhaps even more so with the presence of the smooth-passing Diskerud. Finally, with two true midfielders behind Dempsey, the U.S. would be well suited to trouble the deep-lying distributors of both Portugal and Germany. CONS: Despite Diskerud’s popularity, his limited size and athleticism can lessen his impact against physical sides. He struggled in a similar role against Bosnia last summer, but he’s improved since then. Also, this setup would be severely lacking in the pace department, especially if Zusi is preferred to Bedoya. Meanwhile, having Zusi/Bedoya and Diskerud as two of the three most advanced players leaves a lineup with few natural goal scorers high up the pitch—for instance, Bradley is a huge upgrade in this department over Diskerud or either of the two wide midfielders. The combination of limited pace and goal scoring ability would stymie much of the potential counterattacking benefit of this setup—Jones, Beckerman, and Bradley would be sure to generate counterattacking chances with tackles and interceptions, but would the U.S. do anything with those chances? The potential offensive concerns of Option 2 are magnified even more with this setup, unless, of course, Diskerud delivers a moment of magic or two. As mentioned before, though, a team that plays for and earns a draw would be a rousing success. Also possible here is Bradley remaining in his more advanced role, now next to Diskerud, and Bedoya staying as a right center mid, with Dempsey staying as the lone forward. This seems unlikely, though, given the similar areas that Diskerud and Bradley would be inclined to occupy in the attacking third. The last possible Christmas tree alteration would see Bradley joined by Bedoya or Zusi in front of the three central midfielders, with the one that doesn’t play higher up with Bradley dropping back next to Beckerman and Jones. No Mix in that setup. Knowing Klinsmann and his trademark unpredictability, we could easily see any or none of the above formations. Still, we can predict at least some lineup certainties—Dempsey, Bradley, Jones, Beckerman, and at least one of Zusi or Bedoya are locks. And if only one of Bedoya/Zusi plays, the last spot in the front six is almost guaranteed to be filled by Wondolowski, Johannson, or Diskerud. Elsewhere, the defense seems to be close to a lock as well, with John Brooks instead of Besler a slight possibility if Besler’s recovery is slower than expected. What do you think we’ll see from Klinsmann and the U.S. on Sunday? What would you if you were naming the U.S. Starting XI? Let us know in the comments section below, and make/share your lineup using ASN’s Starting XI Tool. Blake Thomsen is an ASN contributing editor. Follow him on Twitter and he'll be your friend for life—and respond to your inquiries and tweets.