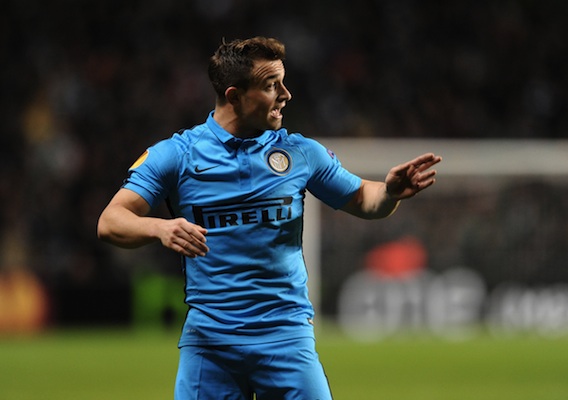 Led by 23-year-old Inter Milan winger Xherdan Shaqiri and Juventus right back Stephan Lichtsteiner, Switzerland should provide a stern challenge to a U.S. team that lost to Denmark on Wednesday.
BY Andrew Gastelum Posted
March 30, 2015
11:00 AM

WITH ONLY TWO WINS in eight games since the World Cup, things aren’t exactly going to get easier for the U.S. men’s national team anytime soon. In fact, its next four matches come against four teams that advanced past the group stage at last summer’s World Cup.

That run through the gauntlet starts Tuesday night in Zurich, where the Swiss await fresh off a 3-0 Euro 2016 qualifying win over Estonia. After the insipid defensive display against Denmark last Wednesday, Jurgen Klinsmann will have to brace his side for an even sterner offensive threat in Switzerland.

OVERVIEW Like the United States, Switzerland’s World Cup dream in Brazil ended in extra time during the Round of 16 (a win for each would have seen the two meet in the quarterfinals). However, the Swiss held Lionel Messi’s Argentina to zero goals through 117 minutes, before Angel Di Maria set the runners-up on a path toward the World Cup final. Finishing just one point behind France in Group E, Switzerland turned out to be one of the surprise teams in Brazil, despite coming as a Top-10 ranked side by FIFA.

Manager Ottmar Hitzfeld retired following the World Cup after coaching Switzerland to 30 wins in 61 matches over the course of six years. Enter former Lazio manager Vladimir Petkovic, who has settled the nation into 12th in the latest FIFA World Rankings.

The United States is 1-3-3 all-time against the Swiss, with the Yanks winning the most recent contest—a 1-0 victory in Basel.

RECENT PERFORMANCE The two nations have shared at least one opponent in common over the past two years: At the World Cup, the Swiss dismantled CONCACAF foe Honduras 3-0 to clinch passage to the knockout stages in its last victory under Hitzfeld. After a rough start to Petkovic’s reign, Switzerland has turned things around in Euro 2016 qualifying with three wins in its last three matches, outscoring San Marino, Lithuania, and Estonia 11-0 along the way.

But against the current top 50 in FIFA’s rankings, Switzerland has only one win in its last seven matches (a 2-1 win over Ecuador in Brazil) dating back to the start of last year. Due to losses against England and Slovenia to start its Euro 2016 qualifying campaign, the Swiss team finds itself tied with Slovenia for second place in Group E with nine points.

Outside of a managerial change and the international retirement of longtime goalkeeper Diego Benaglio, not much has changed for Switzerland since Brazil. Youth has remained at the core of Swiss operations—the average age of Friday’s starting XI against Estonia was 25 years old. Comparing its starting XI from the Argentina match at the World Cup to Friday’s qualifier, there were only two changes as striker Haris Seferovic entered the fray to score one of three goals against Estonia.

Under Petkovic, Switzerland has adhered to the same 4-2-3-1 that Hitzfeld rode to the World Cup. However, against Estonia, Petkovic opted for more attacking freedom by switching to an offensive 4-3-3 with Seferovic leading the charge supported by the dangerous wing play of Josip Drmic and Xherdan Shaqiri. Captain Gokhan Inler played in the lone holding midfield role to support the back four.

TOP PLAYERS TO WATCH One star that rose to the global stage at the World Cup was Swiss winger Xherdan Shaqiri. The 23-year-old led the team in scoring with three goals and an assist in four matches in Brazil. Shaqiri has found himself at a club crossroads this season, heading to Inter Milan on loan from Bayern Munich in January after a lack of playing time with the German champions. But that has yet to affect the forward’s international play, evident Friday against Estonia when he used his endless motor and acute crossing to assist on all three of Switzerland’s goals.

Meanwhile, right back Stephan Lichtsteiner has proven to be just as reliable for the Swiss along the back line. Known as the Swiss Express for his blistering runs down the right flank and ability to play two-way soccer, Lichtsteiner has put together quite the career in Serie A. Since arriving at Juventus, Lichtsteiner has played an instrumental role in the club’s three consecutive league titles, with a fourth in the works this season.

Yet the 31-year-old has shown no signs of slowing down, notching three goals and four assists in Serie A this year. U.S. left back Greg Garza struggled to contain Lasse Vibe and Daniel Wass down the wing against Denmark; it’s a scary thought to imagine the likes of Shaqiri and Lichtsteiner rummaging his way.

ALSO KEEP AN EYE ON FC Basel defender Fabian Schar has put together quite the remarkable start with the Swiss national team. Less than two years after making his debut for the senior team, the 23-year-old has cemented a place in the starting XI while scoring five goals in 11 international matches as a central defender. There’s no wonder why Arsenal has been eyeing the defender for quite some time now. It would behoove the U.S. to work on its set-piece defending as Schar headed home a goal Friday.

While all we’ve been talking about are goals and flash, there’s one man who grinds the gears as the cog in midfield. Granit Xhaka, 22, is fourth in the Bundesliga in passes per game with 76.6 and also ranks in the top 10 among midfielders with an impressive 86% pass completion rate. The Borussia Monchengladbach midfielder made his mark at the World Cup with his precision passing and forward movement, paving the way for Switzerland with a goal and three assists in four matches.

Andrew Gastelum will be covering the U.S. men's national team in Zurich over the next few days. This is his first piece for ASN and we really think you should follow him on Twitter.